Rene loves using the Roadside America app to find fun and quirky roadside attractions wherever we go. This has led us on some wild goose chases for creepy clowns and a veterinary medical museum. When she suggested we visit the Carbon County Museum in Rawlins, Wyoming I was a bit skeptical.

Then she got really excited: “They have a pair of shoes made from human skin!” I relented, after all it was our anniversary.

Honestly, small town museums are best. They offer insight to local history, and often shed light on little known facts…like those shoes made from Big Nose George. No not just his nose, it wasn’t that big. But his story is a tall tale.

In short, after Big Nose George was hanged for murder, doctors Thomas Maghee and John Eugene Osborne took possession of his body. They kept it pickled in a barrel and used it for various experiments, and peculiarities. After preserving the skullcap, they tanned his hide and fashioned a medical bag, coin purse, and pair of shoes.

Ssshh…don’t tell anyone. I apologize for the quality, but photographs of the shoes are not allowed. I did, however, respect the “no photos” sign next to first Wyoming flag and all the Native American artifacts.

I also respected the impressive representation of an “Indian Eagle Catching Ceremony” on display where you first enter the museum. Even more impressive would be grabbing those coveted feathers without losing an arm.

If you visit Rawlins, be sure to check out the museum and don’t miss the items on display in the garage.

There you will find an old race care, firetruck, and Sheep Wagon. These very first RVs were the first self contained vehicles with kitchen and sleeping quarters. They have another one out front you can step inside. 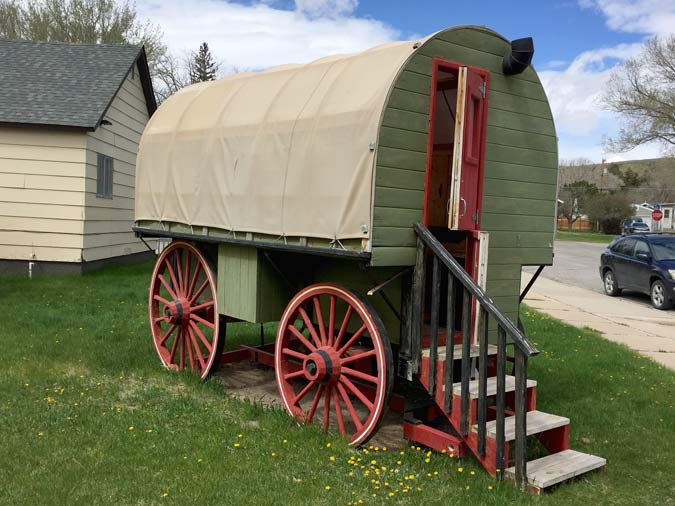 There is also a rather impressive antique Mosler & Bahman safe, with another intriguing story behind it.

I especially enjoyed the old printing press out in the garage…

…which had apparently last been used to print Poison labels. Or at least staged to look that way.

The medical and military exhibit was of particular interest to me, as they had an old West Point uniform similar to the one worn by my father, as a West Point cadet.

It seems every small town museum has its own collection of medical and Dental artifacts.

This one had at least two.

This museum reminded me of the Walla Walla museum, where we spent hours looking for my dad’s cadet uniform which was supposedly on display there long ago.

I also thought of the time we went out of our way to see William Least Heat-Moon’s Ghost Dancer van, tucked away in the bowels of the Mizzou Anthropology Museum.

The highlight of the Carbon County museum – aside from the shoes – has to be their Edison exhibit. It offers plenty of education about Thomas Edison, the Light Bulb and the Eclipse of 1878. That’s when he was inspired for his final successful attempts at perfecting the incandescent electric light.

Don’t miss our video recording of the Edison cylinder phonograph, ! I promise.

The best part of our visit had to be the telephone history display. It depicted an old operator’s switchboard, with two telephones on top.

I laughed out loud when I saw the card reading, “Touchtone Telephone”. Remember those!? 😉