The shortest hay season may last only a few hours, or a few weeks, depending upon how you look at it. This year’s Rocky Mountain Harvest at Vickers Ranch lasted both. Putting all the hay up took a couple months, yet only a few hours. Let me explain…

Now that may not look like a lot of hay. It’s not, compared to previous years. But that’s not all the hay either. If it were, this would have been the shortest hay season for sure!

What do I mean by the shortest hay season?

We were only workamping for two months last year at our favorite ranch job. Over that entire eight weeks, hay season was on everyone’s mind, every day. Putting up the hay has been a big part of our ranch workamping job every season – for the past 9 out of 13 years. But when it comes to the Rocky Mountain Harvest, hay season is very unpredictable. 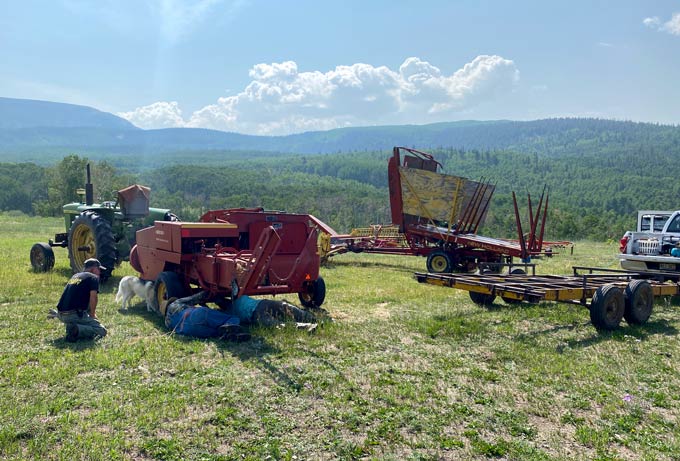 Staging all the equipment and getting it all in working order is a big deal. Most of it has sat out at altitude all winter. And all of it is pretty old. Then the weather plays a major role in creating small windows of opportunity when we can mow, rake, bail, and stack. And then, something always can and will go wrong. 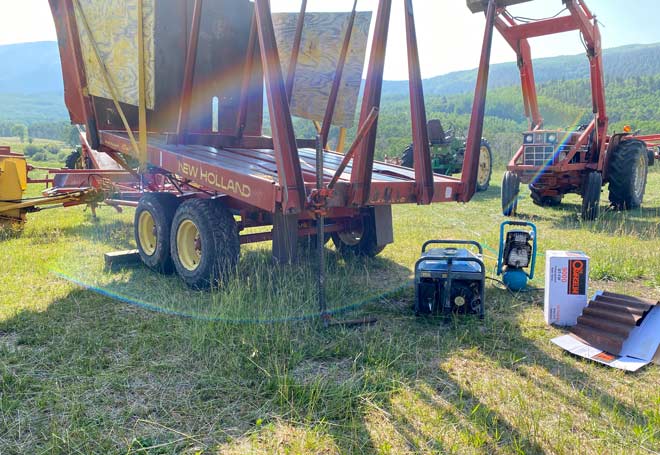 All this adds up to the shortest hay season only lasting a few hours, over the course of a couple months. Once the weather plays nice and everything is working well, that is. 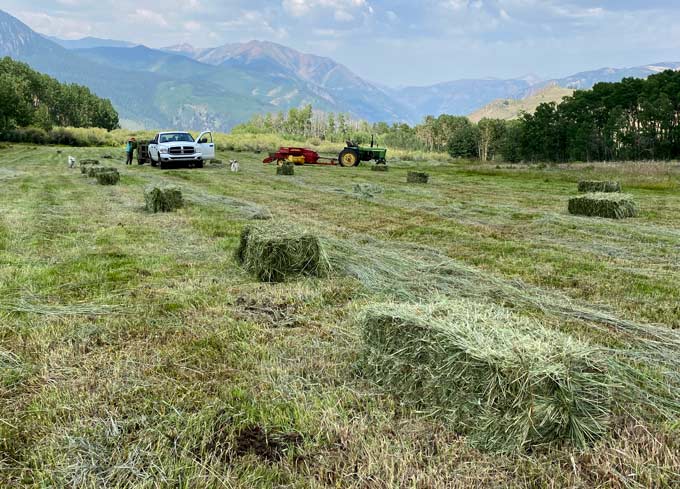 There’s nothing quite like the family working together like a finely tuned machine to put the hay up. And yes, I feel like part of the family at Vickers Ranch.

With dry rows of hay all raked up, Larry runs the baler. Paul and I follow with the stacker picking up bales and making runs to the barn. At least that’s how it’s supposed to work during our Rocky Mountain Harvest. But as I said, circumstances are bound to make the shortest hay season last longer than it needs to. 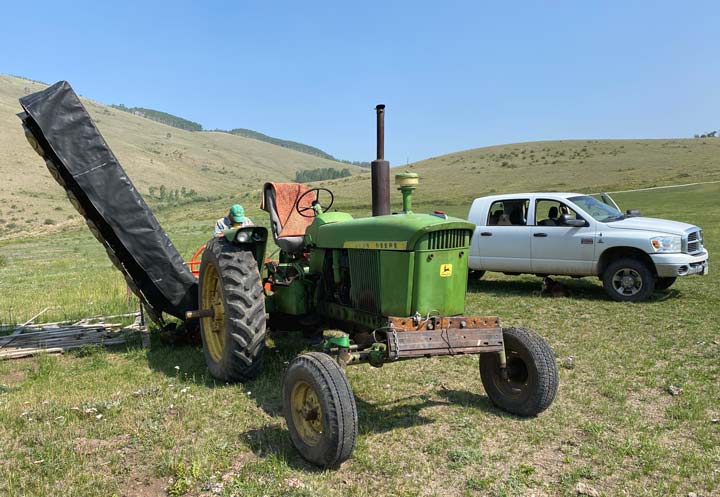 As always, getting everything up to the upper ranch and getting it all working was half the job. But you can’t beat the views while riding the old John Deere up the mountain. And back down… This year, the rake broke. Then there were a few flat tires. 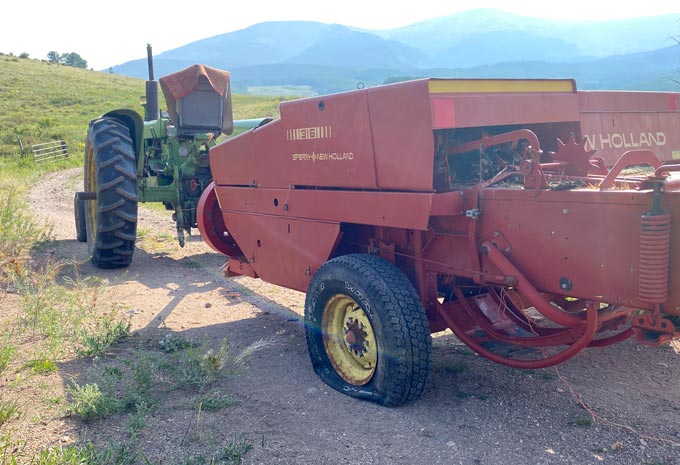 And the stacker was out of commission with the first loads of hay sitting on the ground. That meant putting up the hay by hand. And that meant lifting a lot of hay bales, by hand. 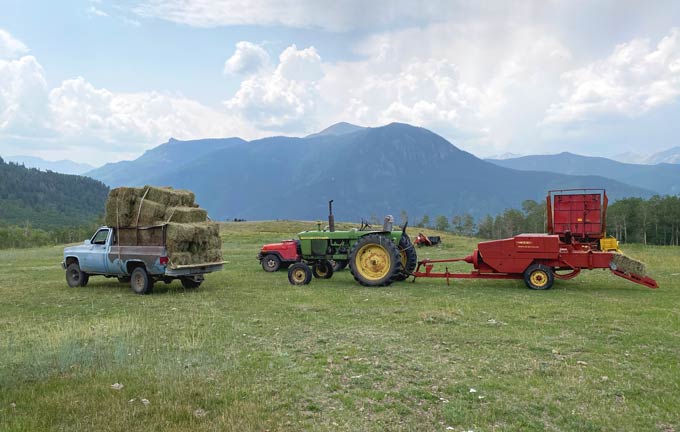 These bales are heavy! But I enjoy the workout, and the challenge. We made quite few trips stacking hay onto a flatbed trailer. 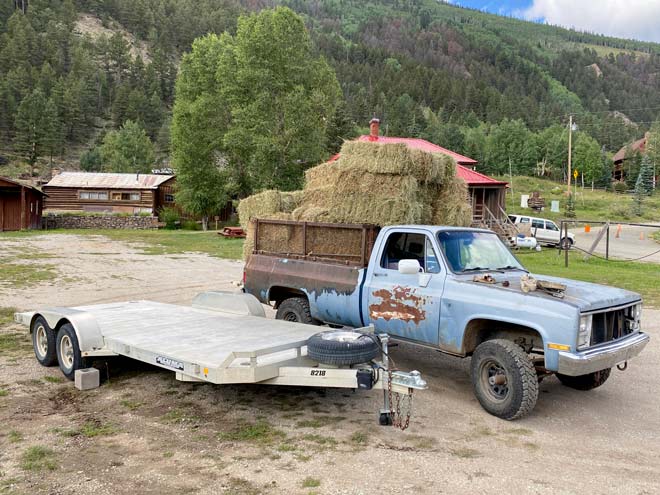 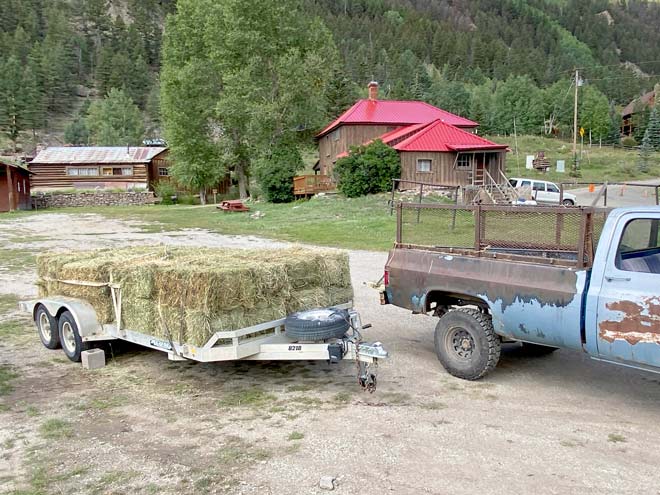 And I personally made a few runs single-handedly stacking bales into the old ranch truck and then stacking it again behind the horse barn, or onto the trailer for trips to town.

As you can see in this long overdue video, once everything gets going the shortest hay season this year only lasted a few hours. We put up two full loads in one afternoon. (For more ranch workamping videos, subscribe to LiveWorkDream on Youtube!) 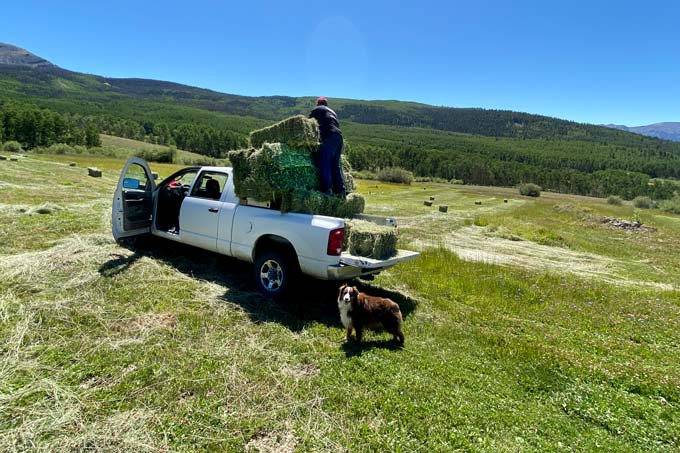 Then of course, we had to pick up the few remaining stragglers and load them into the truck.

When I threw up the final bale, Paul said, “This may be the last time you load hay with me.” I hope not, but it made me wonder…

It’s all just another day on the ranch. And another reason we’ll likely return for another Rocky Mountain Harvest. Even if that turns out to be the shortest hay harvest again.

And yes, that last hay bale fell off the truck that way. No staging, just a final question to wrap up another fantastic season at Vickers Ranch!

1 thought on “The Shortest Hay Season – A Rocky Mountain Harvest”