What does a gay horse eat? Haaaay-aaaay!!! 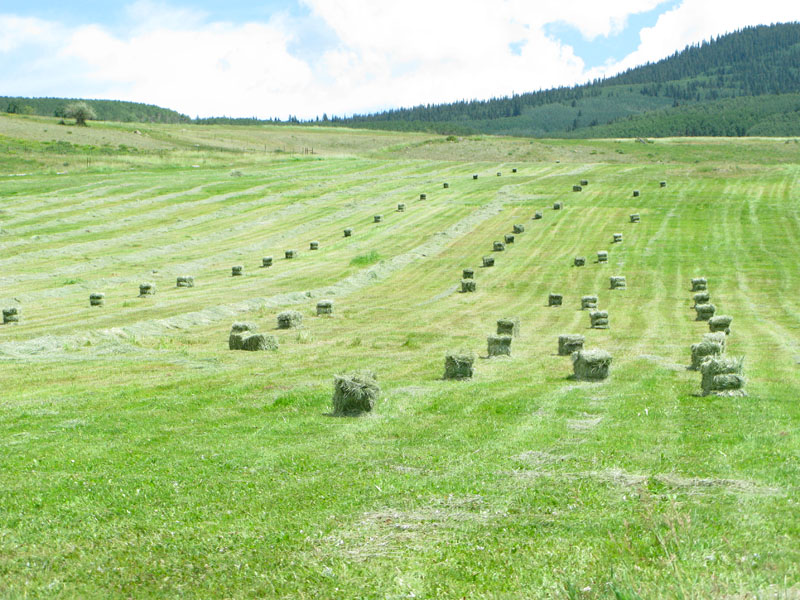 You probably gotta hear that one to get it. Or have gay friends. But the point is, ya gotta have a good sense of humor when it comes to hayin’ because things can go wrong which may ruin your day, or entire season. And when you’re a hayin’ there are an awful lot of things that can go wrong.

We actually got all the hay in the Vickers Ranch barn a few weeks ago now. But with so much that happened to halt the hayin’ this year, its amazing we got it in at all. In fact, according to the Vickers we still finished earlier – and with more hay – than any ever before. 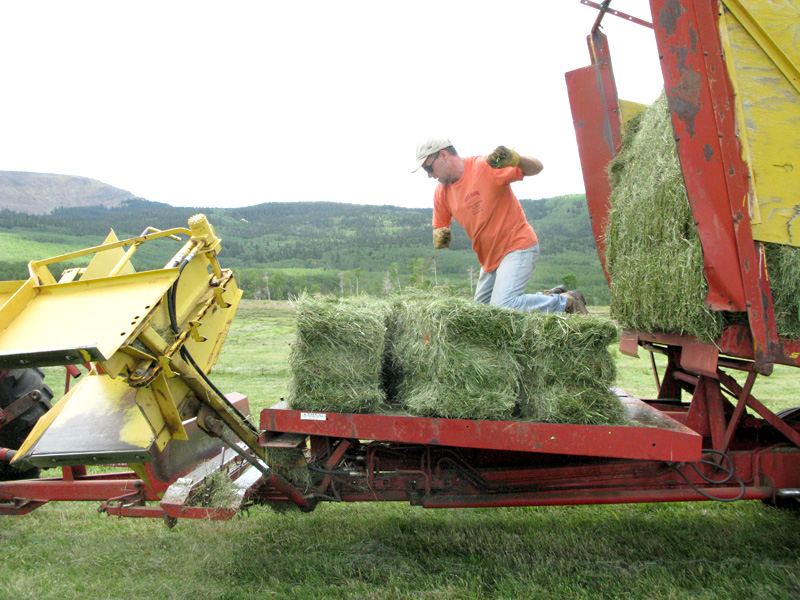 Collecting and stacking hay is hard work, but first it must be baled. Before that it has to be raked into windrows. But to do that it must first be mowed.

All of the above depends upon the weather. Oh, and the equipment working properly. And nobody getting hurt.

Luckily no one got hurt, which is amazing in itself. But apparently, the weather was on our side this year. Holding out just long enough for us to deal with each of the myriad mishaps… 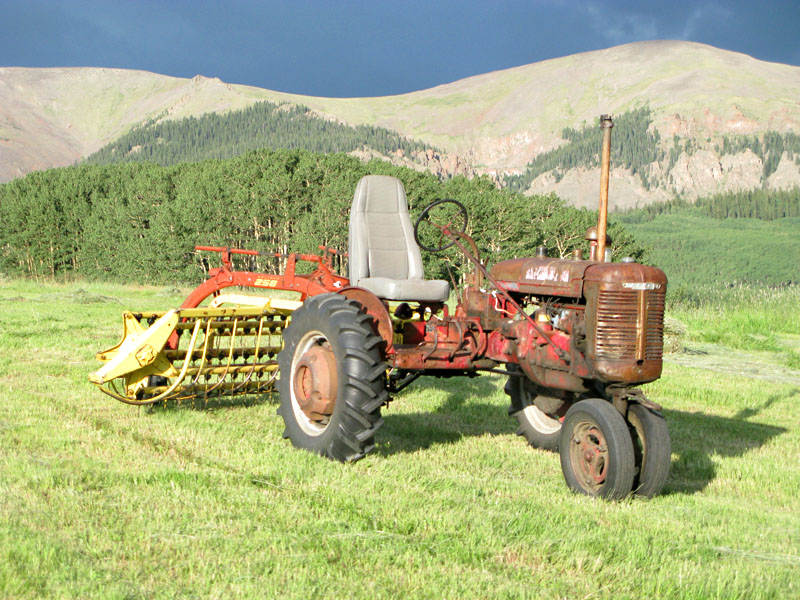 I got a crash course in raking the rows. Quite literally. Larry explained how to pull the rake down and back the mowed field to create rows and said, “Go for it!” I did, and immediately snapped the hitch extension off the rake implement by turning to the old John Deere a little too tightly at the end of my very first row. At least this meant I got to drive the really old Farmall! 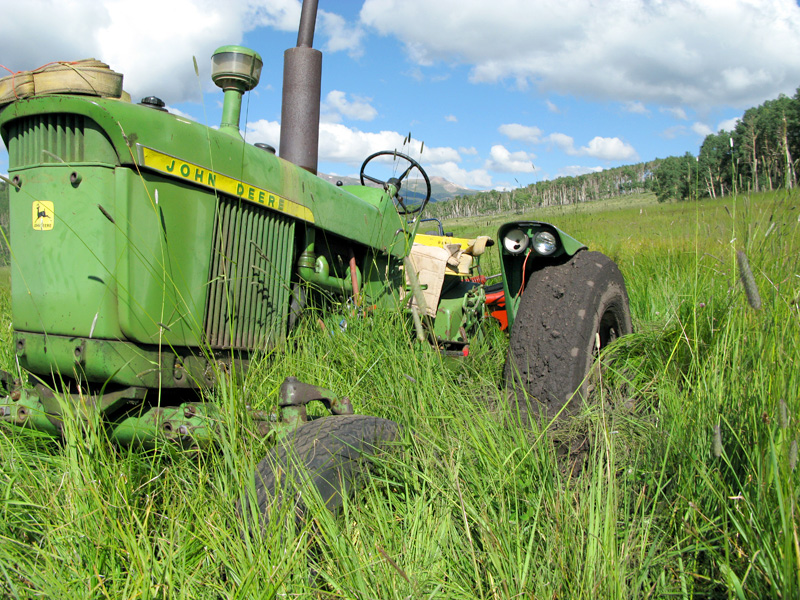 This was just the beginning. Larry later proceeded to plant the big John Deere in a swamp he found while mowing the upper meadow. We took a few days, a few more chains and couple tow straps to get it out. Stay tuned for the blockbuster video, Hay Country! featuring the mowing antics of Larry Vickers and Wilbur.

The weather was still with us. You see, you don’t wanna have the get wet once it’s on the ground. Especially if it’s baled. That’s why it was a real bummer when the stacker blew a hydraulic hose half way through picking up one meadow. A quick MacGyver fix with a plastic bag and electrician’s tape lasted just long enough to stack the load on board. Barely. 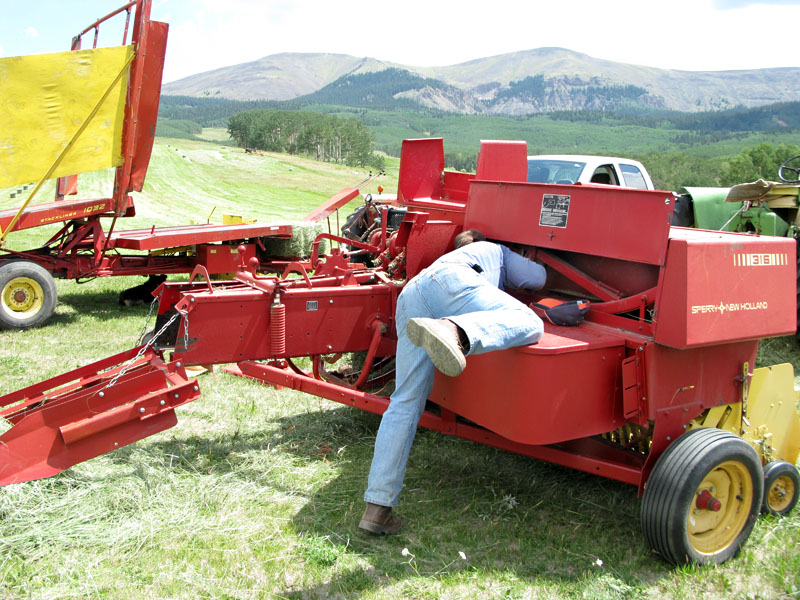 A couple days and a few new hoses later, the spook got to the baler. Ya see, a family that’s been hayin’ the same fields since great grandpa homesteaded the place has to have at least few ghosts. And they like to hang out in a certain upper meadow near the old cabin. For some reason this year, they messed with the baler that’s worked perfectly for thirty some years. 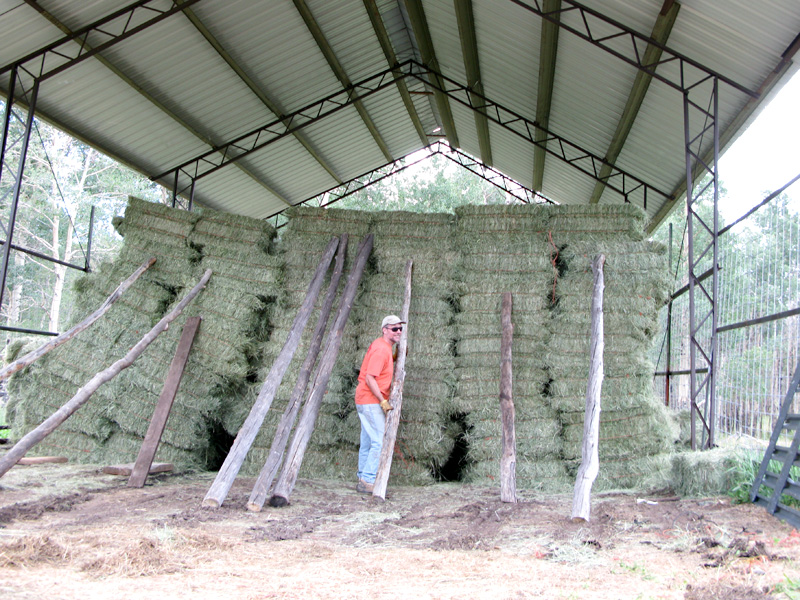 Why else would it fail to tie all of a sudden? Even after replacing the only obviously worn parts? And then even after towing it to a dealer for service a hundred miles away? Even then, why else would it tie bales going uphill, but not downhill.

Larry figures it was the spook. But after removing a spring that was replaced because it should have been there but was missing, the old New Holland worked like a charm. That spring was obviously not there for a reason.

It took a lot of days of workin’ hard – including a few days off – but we got the job done. After all, “Days off or for when you’re not hayin’.” Or so I’ve been told. The rain poured down the next day.