For this week’s Friday Five, I’ll share a few photos of my job building rock steps this past summer. This was yet another fun workamping project at Vickers Ranch. It was also a good workout. 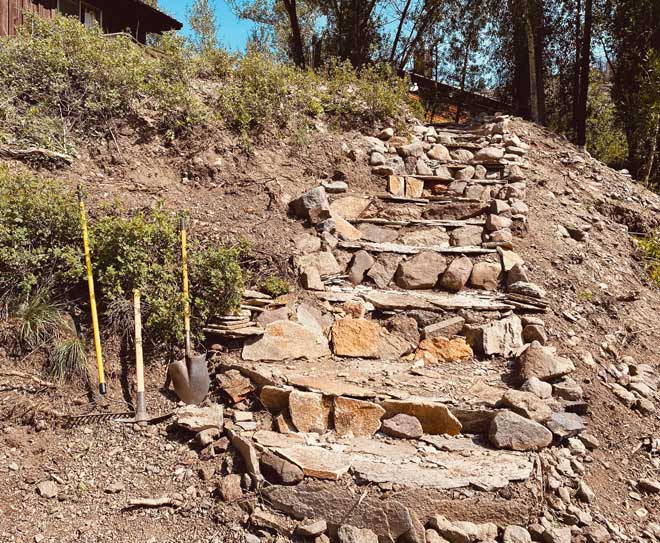 What is this Friday Five? That’s when I share five photos from 14+ years of our Live Work Dream Galleries. It’s usually a random collection, and often more than five. I missed posting last Friday. Did you miss it? I didn’t think so… 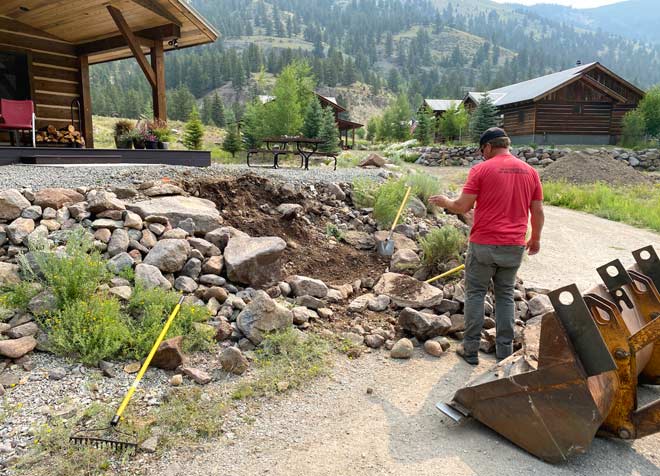 So, about building rock steps…it all began with this simple project. It was only a few steps, and Paul had already cleared out a spot from the rock retaining wall. He had also gathered some nice big shale pieces. 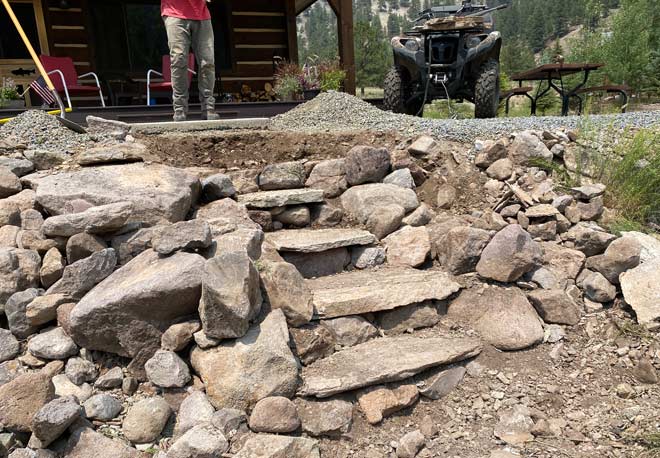 Within a few days over the next couple weeks, I terraced the rocks with a pick and shovel. I placed some larger stones for the stair kickers. And I put the shale pieces in place to create this nice little rock staircase. 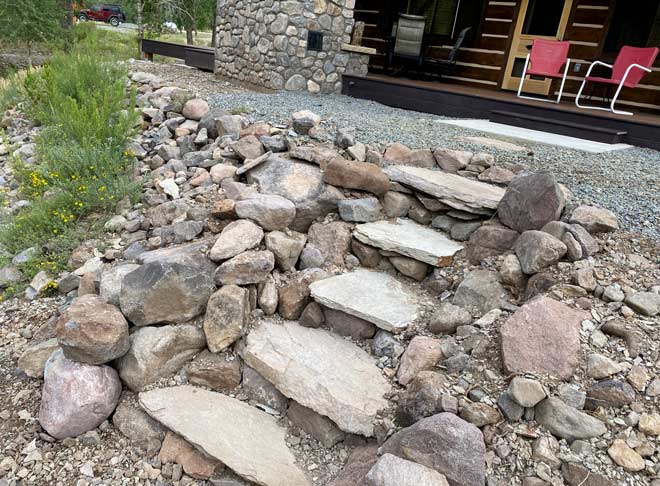 Then the real fun began. Paul informed me we were building rock steps for another homeowner. Taking this project on single-handedly gave me another good opportunity to become closely acquainted with my good friend Manuel Labor.

This other rock staircase was to be more than a mere few steps. Much more. To give you an idea of how much more, I took lots of photos to document my progress. 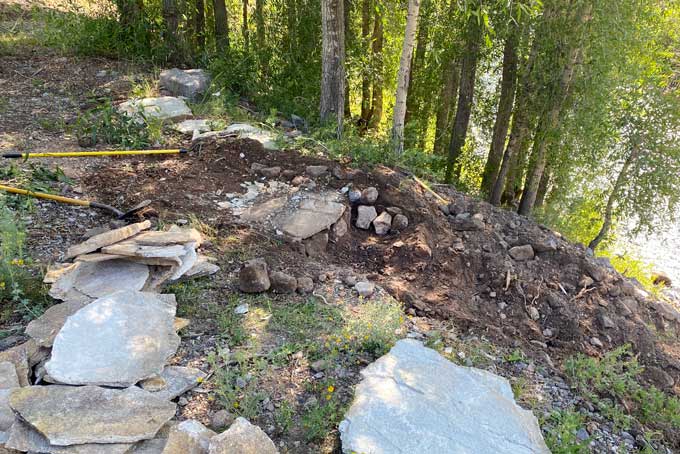 This is how it all began. What you don’t see: This is the first step I placed when building rock steps all the way down to the river. 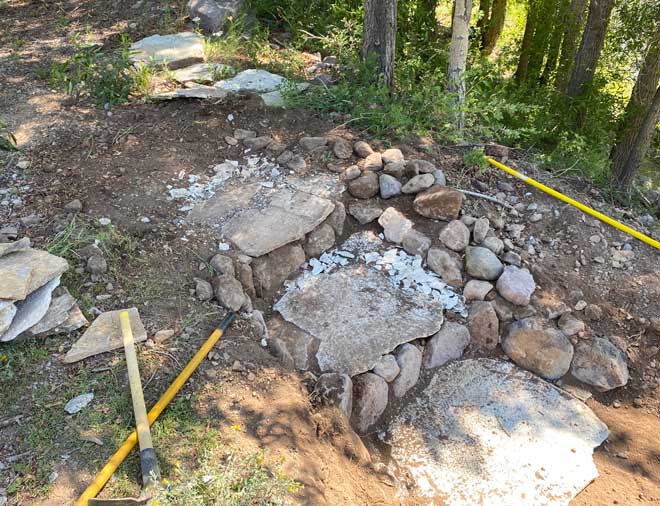 This project took much longer. Thankfully we were on no tight schedule. I picked away at it in between woodcutting and logging days. I quite literally picked away at this project. There’s a reason they call it the Rocky Mountains! 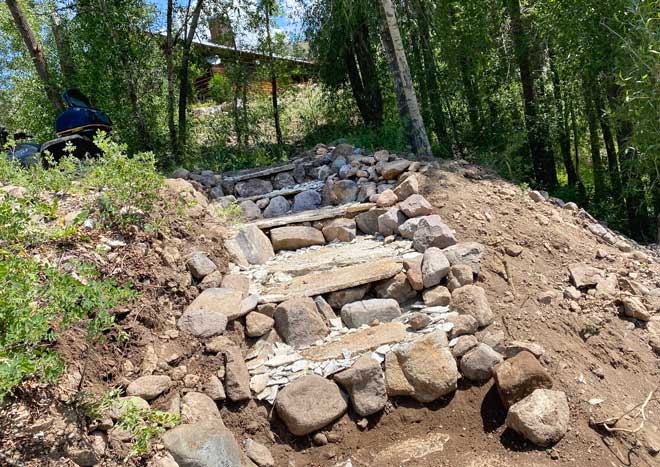 Building rock steps like these took me most of our summer at the ranch. I think there were close to twenty total steps, but I stopped counting at some point.

We were only at the ranch for a couple months. But it seemed like I was building rock steps every few days. I would only put a couple hours in at a time, usually in the morning. I eventually worked my way past the shade of Cottonwood trees near the top. That’s when it started being really hot work. 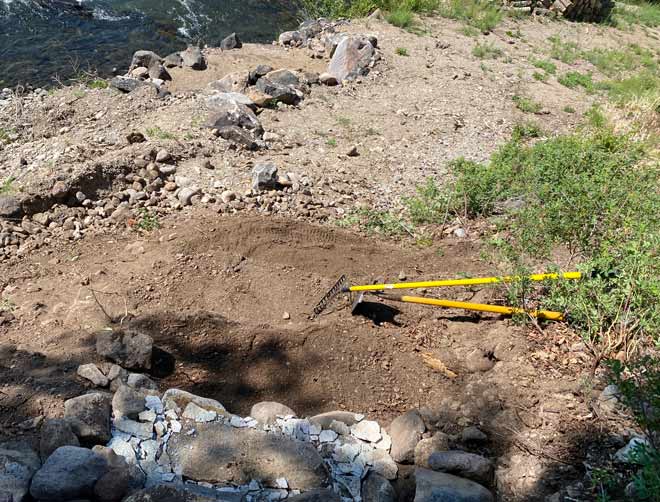 It was already backbreaking work. But I’m okay with that. It didn’t actually break my back. As I’ve said here before, the physical demands of workamping jobs are good exercise. 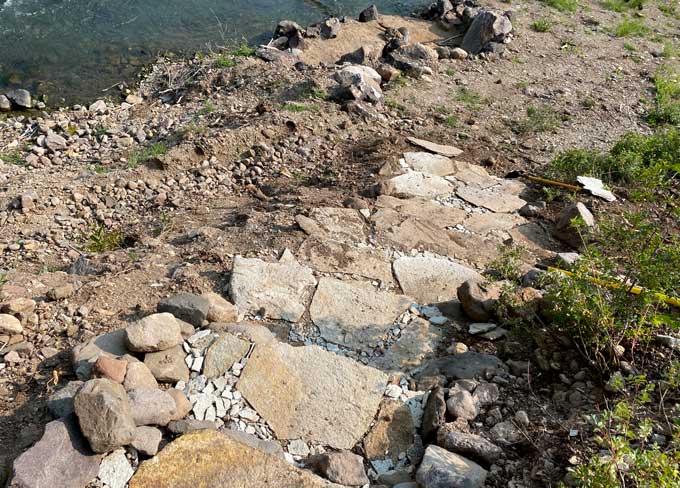 Yeah, this is still the same project. I had to make a few more runs up the mountain, scouting around for some good shale steps. Much of it was pretty brittle though. So I had to get mroe creative, the farther down I worked.

With the previous job of building only a few rock steps, working our way up from the bottom was best. With a drop of 20+ feet, it made more sense to work my way down. Picking, shoveling, and raking down along the hillside allowed me to shove rocks down to support the next step. 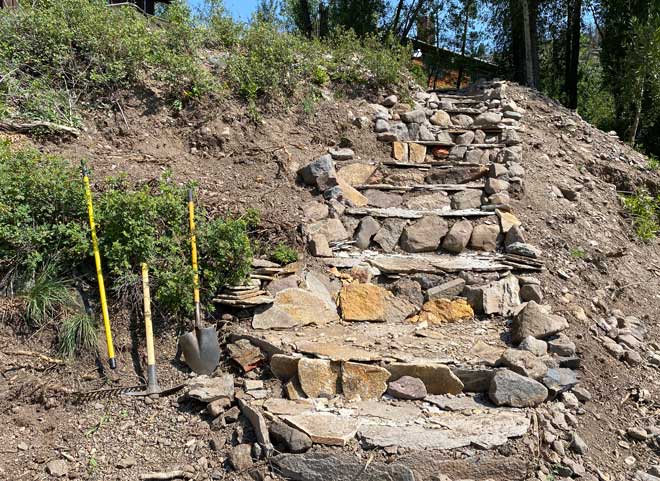 As I neared the bottom, steps started to get rather steep pretty quickly. So, I had to work my way around the hillside – building rock steps of a consistent height.

When building rock steps, you will need a sturdy back, strong legs, a good pick, shovel, hardback rake and lots of rocks. Having a rockin’ playlist, willingness to work out, and plenty of time are also very helpful!

Phew! As suspected, many more than five photos. Suggest a topic for the next Friday Five and I promise to find a fun random collection of related photos.