Hate is a strong word, but commerce and capitalism seem to have been more important than science for Starlink.

And then, there is the allure of affordable, high speed, reliable satellite internet for RVers. We love our RVDataSat 840. It allows us to get online anywhere with a clear view of the southern sky. Our MobilSat satellite internet works in Alaska. And it lets us work from anywhere, with poor cellular service, or no connection at all. And yes, it is expensive.

I see this image, and think of the Very Large Array. It looks like a massive radio antenna. In reality, the Starlink satellite dish is very compact and lightweight. But there I go digressing again…

Then, my dear friend informed me that he signed up for the Starlink beta program. Then he showed me the package he received, and the speeds he’s getting. I asked about the cost. And the jealousy set in.

“My friend, when StarLink goes full release. It’s going to change your life.” 🎉

Our RVDataSat system is bulky, heavy, and mounted to the roof of our trailer. The initial investment was $7500± including installation and service. The Starlink package is lightweight, and apparently simple to set up.

The small dish is fully automated. My friend says you can assemble it, plug it in and the system auto sets up in about five minutes. The initial set-up package he received (Dish, Router & Power Supply) was $500 and the satellite internet service costs $99 per month. This is considerably less than our current RV satellite internet solution from MobilSat. Oh, and he assures me there is  “NO FAP”! (Fair Access Policy, aka: Data Cap) 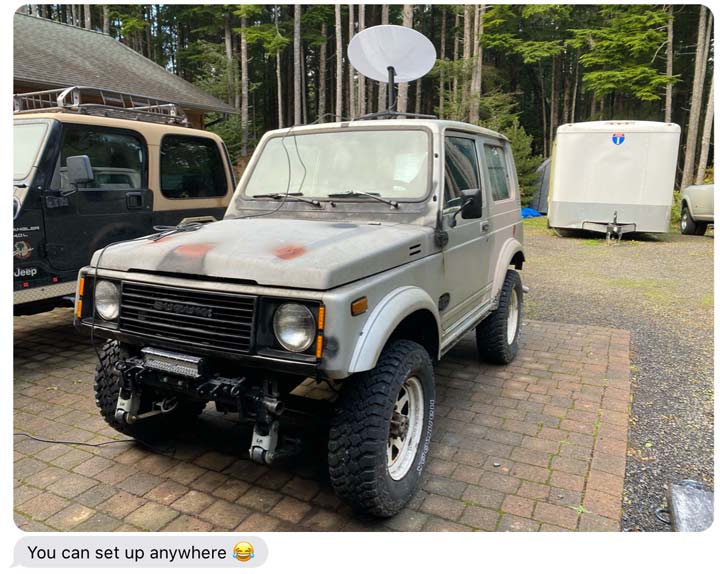 So what is keeping Starlink satellite internet for RVers from being a real thing? There is no apparent reason this setup can’t be 100% mobile as is. For starters, the program is still in Beta and not readily available to the public nationwide. More importantly for RVers, however, is the geo-fence limitation. He says, “My understanding is they are currently geofenced around the  address of the beta test property.” He adds, “Not sure if this is to ensure the data they are getting during the test. Or if they will keep them that way and charge differently for mobile.”

With geo-fencing enabled, Starlink is not a viable solution for mobile internet. But it makes sense that Starlink will offer a fully mobile satellite internet option for RVers and digital nomads. We’ll just have to wait and see. So what about those speeds?

In these tests from northern coastal Washington with clear weather, my friend got Starlink download speeds up to 121 Mbps. Starlink upload speeds were up to 24.1 Mbps. The average latency is noteworthy too compared to geostationary satellite based service.

These speeds are pretty impressive for satellite internet. And with no data cap, Starlink becomes more and more alluring. Once the system can be used outside the geo-fence, it seems ideal for use on the road. Then it only becomes a matter of coping with the reality of supporting a company that may be destroying astronomical research for many scientists. Ironic really, considering that is the technology that enabled and supports their product development. But then, we do this already by supporting the Great Satan as such Prime consumers.

Check out Starlink on Reddit for more user reviews and discussion, or to keep tabs on progress of nationwide deployment. If we hear about any sort of mobile solution once Starlink is available to the public, we’ll be sure to let you know. Subscribe here to be notified of future posts and reviews. Or check out all of our satellite internet posts from the past 13+ years as location independent