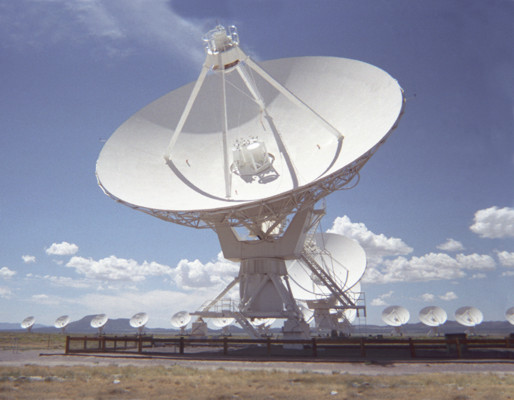 Our workamping job has been keeping us busy, but a couple of weeks ago, we made time to see not only the Trinity Bomb Test Site, but the Very Large Array (VLA) too, a collection of 27 giant satellite dishes made famous by the Carl Sagan fiction novel, “Contact,” and later made into a movie starring Jodie Foster. In the movie, Jodie Foster plays a scientist at the VLA, who is on the verge of making alien contact.

Like the Trinity Test Site, the VLA is only open for tours once or twice a year. As you head up to the desolate area where the antennas stand, it’s like walking into a Christo and Jeanne Claude art installation. With a beautiful desert mountain scenery in the background, the huge antennas standing among the plains are quite stunning.

We were lucky enough to join a small tour led by one of the VLA’s leading project managers, a female astronomer who was incredibly enthusiastic about her work on distant quasars. As she walked us over to one of the 230 ton antennas, she burst our bubble about the movie “Contact.” Although it was filmed on site, VLA projects have nothing to do with alien research or SETI (the Search for Extraterrestrial Intelligence). The VLA’s sole purpose is scientific stellar and galactic research. The world’s largest SETI station is actually close to where we used to live, just 75 miles east of Redding, CA.

Anyone Can Use It 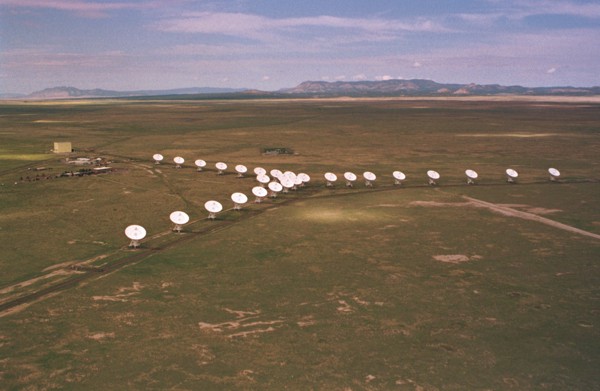 The VLA is funded by the National Science Foundation, and operates under an “Open Skies Policy,” making it open for use by astronomers, free of charge. Astronomers compete for use of the VLA with proposals judged on scientific merit. Winners are allowed use of the facility and its staff for four-month observation periods.

According to their website, “the VLA is an interferometer; this means that it operates by multiplying the data from each pair of telescopes together to form interference patterns. The structure of those interference patterns, and how they change with time as the earth rotates, reflect the structure of radio sources on the sky: we can take these patterns and use a mathematical technique called the Fourier transform to make maps.” 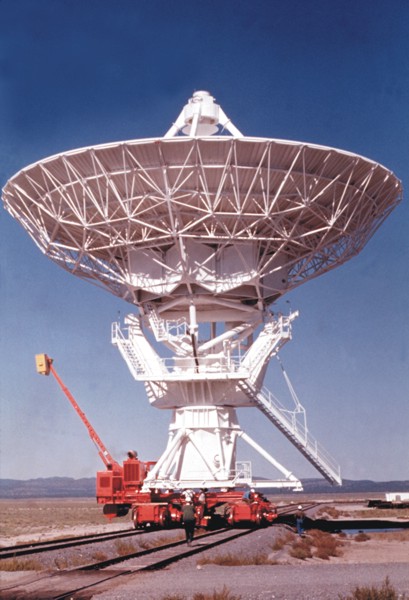 The VLA can be operated in four different configurations, creatively named A, B, C, and D. These differ by the distance between the 27 individual antennas. Two large transporters ride on a double rail system to move the antennas into place. Concrete pedestals with communication links are located on spurs from the three rail lines that stretch out from the center of the property. The transporters lift and spin 90 degrees to move an antenna onto the rail spur, where it is placed on its pedestal, locked down and connected to the network.

The resolution of the VLA is set by the size of the array. At the highest frequency (43 Ghz), the largest configuration will give a resolution of 0.04 arcseconds: sufficient to see a golf ball held by a friend 100 miles away. The parabolic dishes concentrate radio signals collected into feed cones of varying sizes positioned at the center of the dish. The data from the antennas is combined electronically to give the resolution of an antenna 22 miles across, with the sensitivity of a dish 422 feet in diameter. Management and control applications are written in Java and can be operated using a web browser.

Get Off the Phone
There is no microwave oven onsite, and cell phones are not allowed. To eliminate unwanted radio signals, onsite communication is handled with special radios that operate outside the bandwidth of the array and by landlines throughout the property. Cryogenics are used to cool electronics in the antennas and keep frequencies generated from affecting readings of the array. 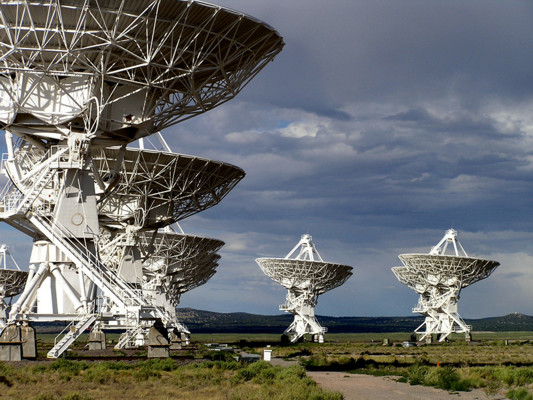 At the time it was constructed, the VLA’s location was chosen because it was on a high mesa, far away from the background radio noise of modern civilization. Today, signals from cell phone companies and air travel are encroaching. A full-time lawyer is employed to ensure cell phone companies maintain their distance with towers and stay within their required radio spectrum for the area.

Not Just for Dweebs
I didn’t expect to enjoy the tour as much as I did. I only suggested going because Jim’s always been into sci fi geeky stuff like this. But after getting the personal tour, and learning about what these big antennas really do, it brought the subject of astronomy down to earth for a non-sci fi geek like me, making it more enjoyable than I’d thought possible.

9 thoughts on “Making Contact at the Very Large Array”