Trail running Handies Peak at age 52 would have seemed like a ridiculous idea to me not too long ago. How could anyone walk, much less run, a 14,042′ foot mountain? More importantly, why would anyone want to? But on my 52nd birthday I gave this bucket list item a shot and lived to tell about it. 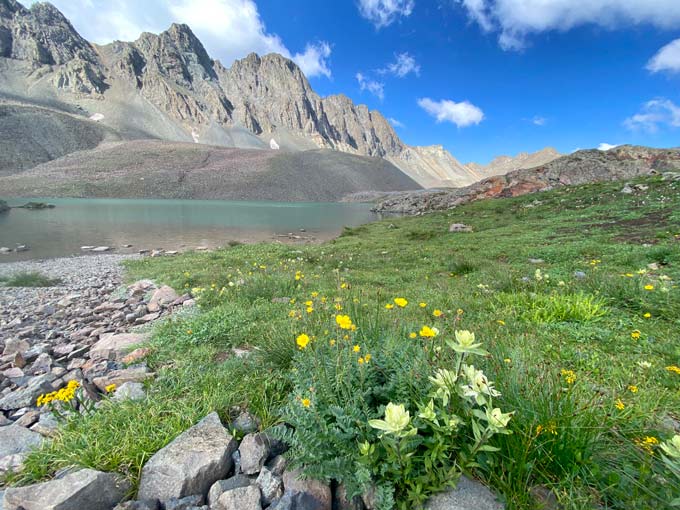 You can’t get closer to heaven than American Basin.

Why Run a Fourteener?

Colorado’s 53 gorgeous fourteeners, those mountains with hikeable peaks over 14,000′ feet high, are on a lot of people’s bucket lists these days. In 2020, Colorado fourteeners saw a 20 percent foot traffic increase, thanks to the number of people who brag about their conquests on social media. 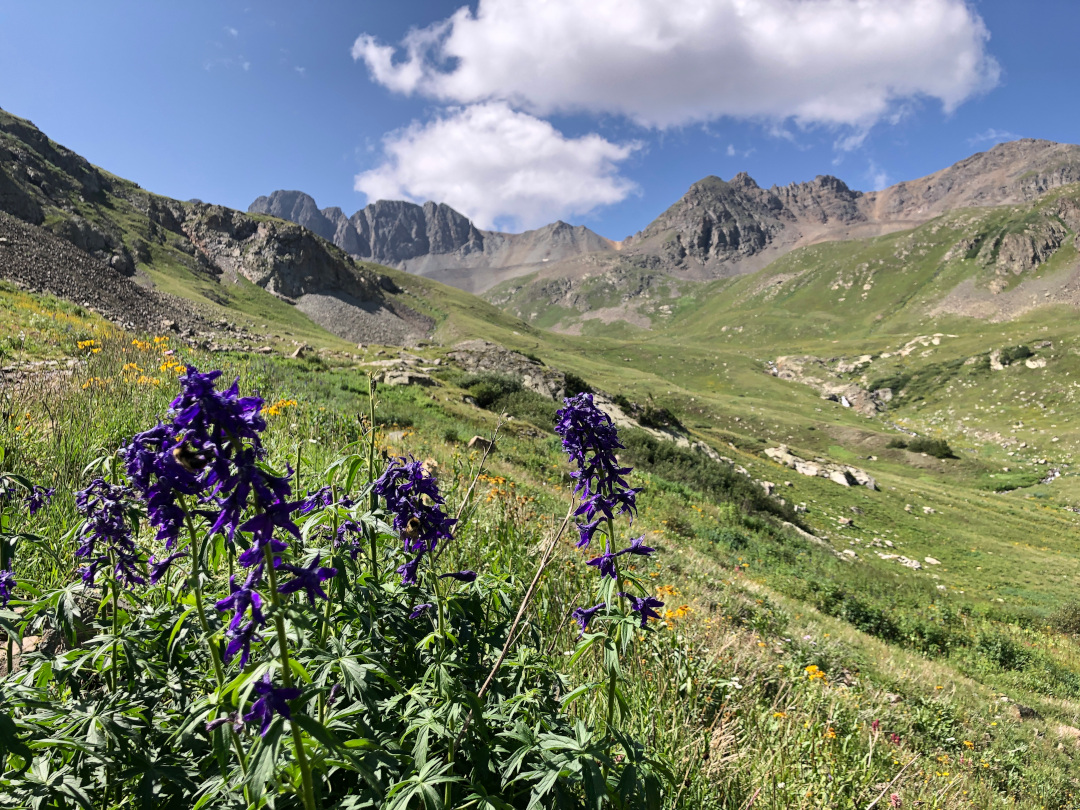 This is why you hike a Fourteener.

Unfortunately, too many unprepared hikers with inadequate gear and hiking knowledge are wreaking all sorts of havoc on the trails. The majority of these foolhardy souls can be found closer to Denver, where numerous fourteeners are easily accessed by roads that practically whisk two-wheel drive passenger cars up to the peak. 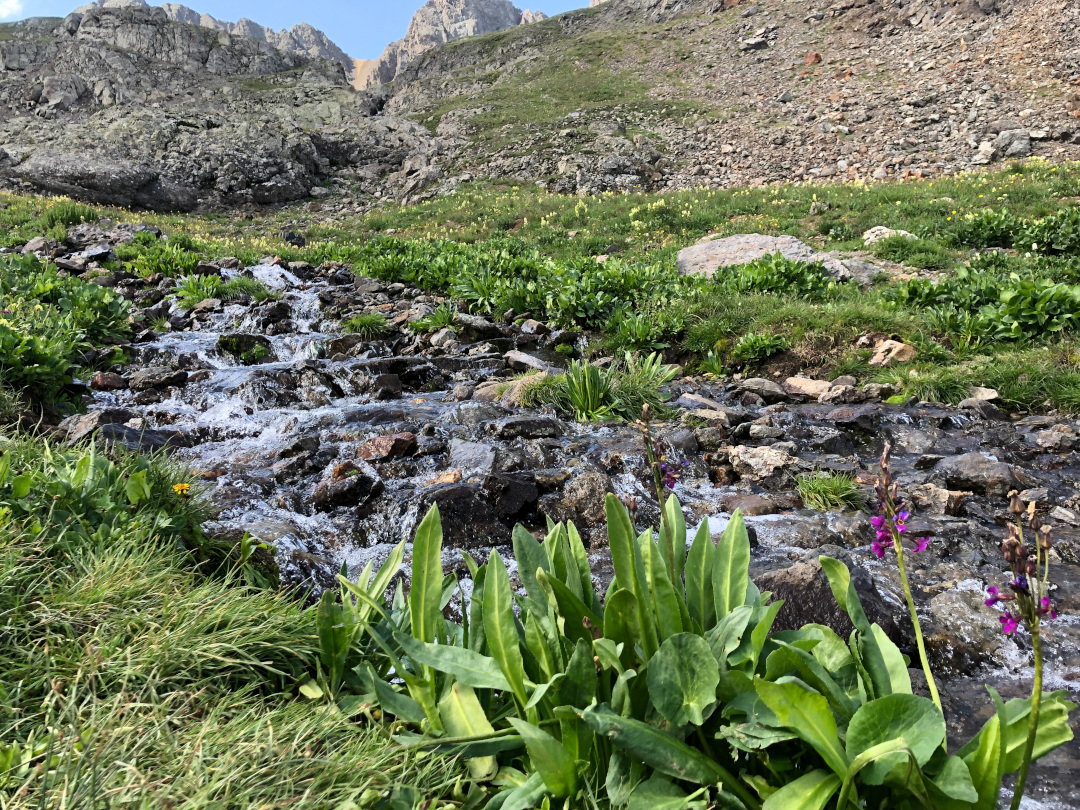 If I could bottle the aroma of alpine tundra and rushing streams, I would!

But Hinsdale County fourteeners are not so easily accessed. You need four-wheel drive to get to all but one trailhead, which is Handies. But even that one is pretty difficult to access without off-road capabilities. Every year while workamping at Vickers Ranch, I would stare at these least visited bad boys standing tall on the horizon, constantly whispering “I dare you!”

We took this photo many years ago, when the idea first occurred to us.

We always wanted to hike one, but never could because Mr. Separation Anxiety Wyatt Ray couldn’t be left alone for more than a couple hours. This year, dog-less and turning 52 without a single summit checked off my bucket list, I announced to Jim that it was time to try running a Fourteener.

The Uncompahgre summit is at 14,309′ feet, and it’s not an easy hike, with lots of scrambling over rocks and unmarked trail. But being the rock-tripping dork that I am, I chose to go the safer route for my first fourteener. We would run Handies Peak instead. That trailhead is at 11,600′ feet, and the summit is at 14,048′ feet.

Known as being the easiest fourteener in the area, I’ve known a fair amount of non-runners who have walked to the Handies summit without dying. I knew if they could do it, we could too.

But I wasn’t going to walk. I wanted to trail run Handies Peak. Or so I thought. 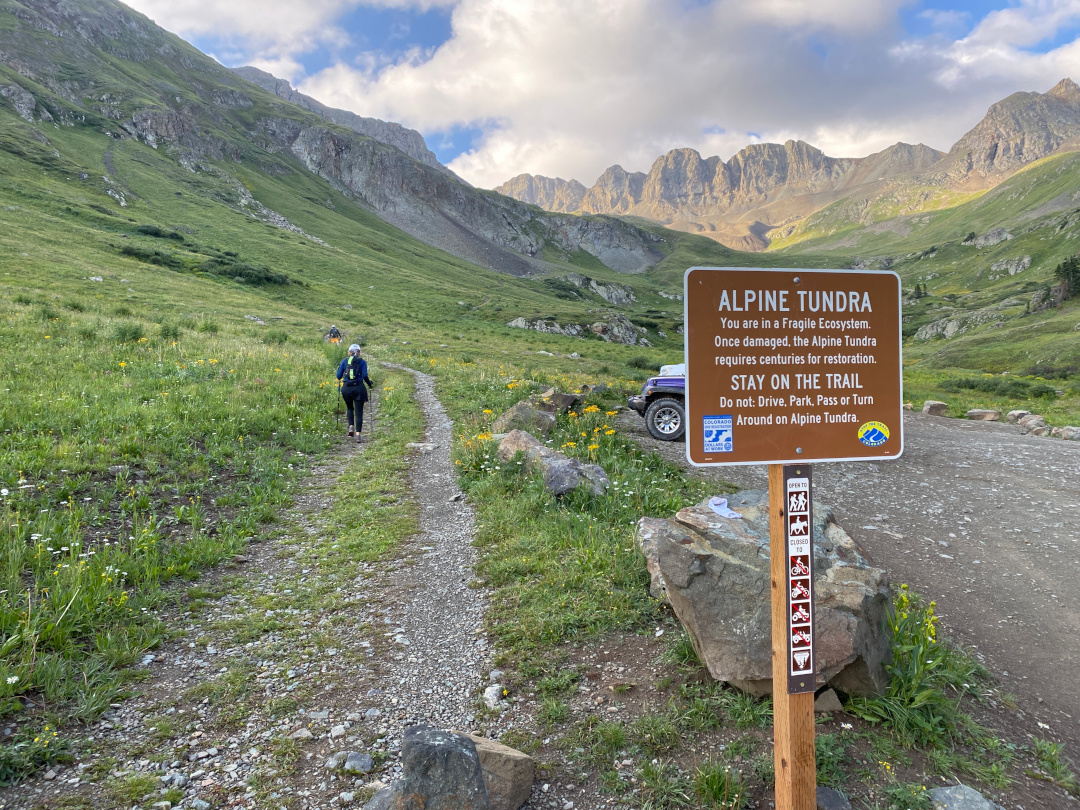 No OHVs to ruin THIS trail!

After a horrifically bumpy ride to the American Basin trailhead that beat the crap out of our Dodge, we set out at about 6:30 am. It was a little late for my liking.Smart hikers are done with a fourteener hike by noon. This is to avoid afternoon thunderstorms that hit the peaks like clockwork. I wasn’t sure if we would make it down in time, but we went for it. 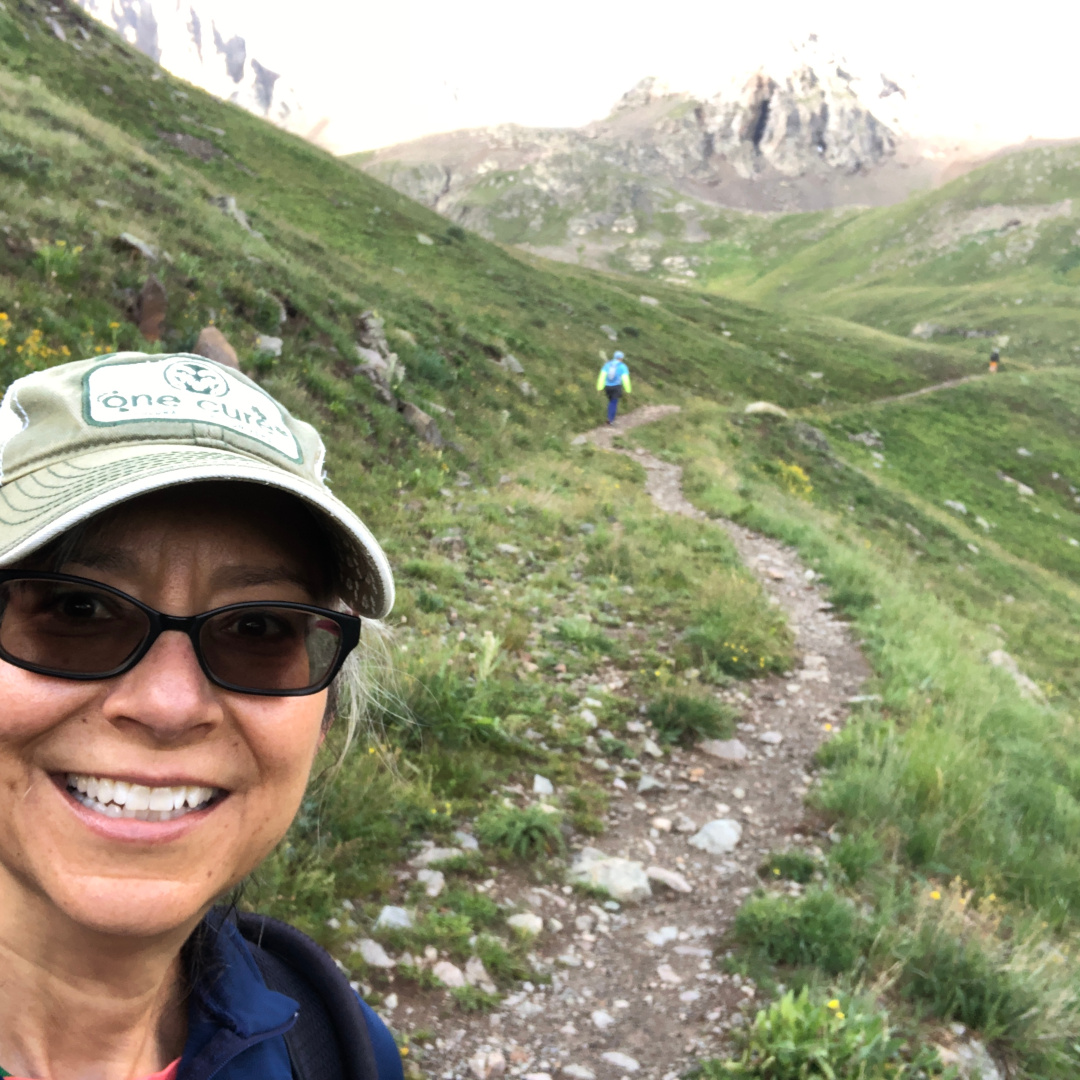 Sure, you’re all smiles and giddy in the beginning!

Before that day, Jim and I were regularly training and running at 11,000′ feet altitude.

“What’s another couple hundred feet?” I thought. Assuming we were well prepared to actually run to the summit, I was shocked at how much the lack of oxygen slowed me down. Jim was moving a little faster than me, but this time I didn’t care. 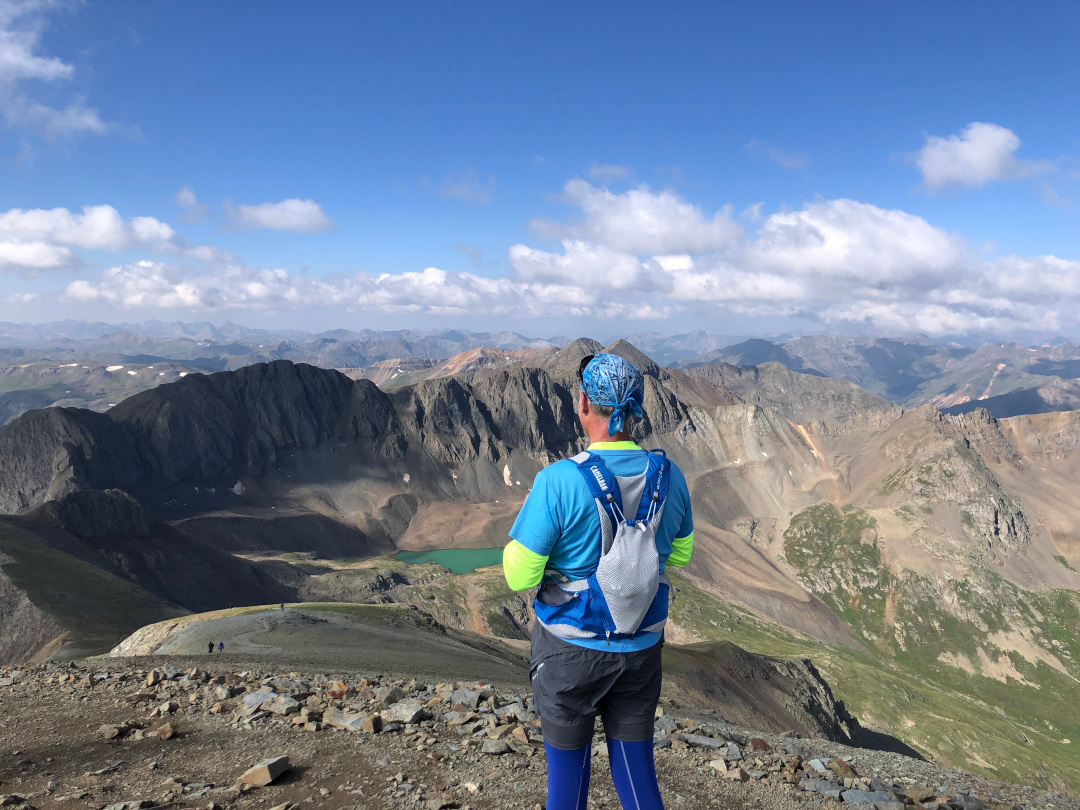 No, we aren’t there yet.

It was hard not to stop every few feet, awestruck by the beauty of this place.

Running Handies Peak? Hah! What was I thinking. Alpine tundra scenes aren’t something you experience every day. This was too good to blaze through. It was breathtaking. 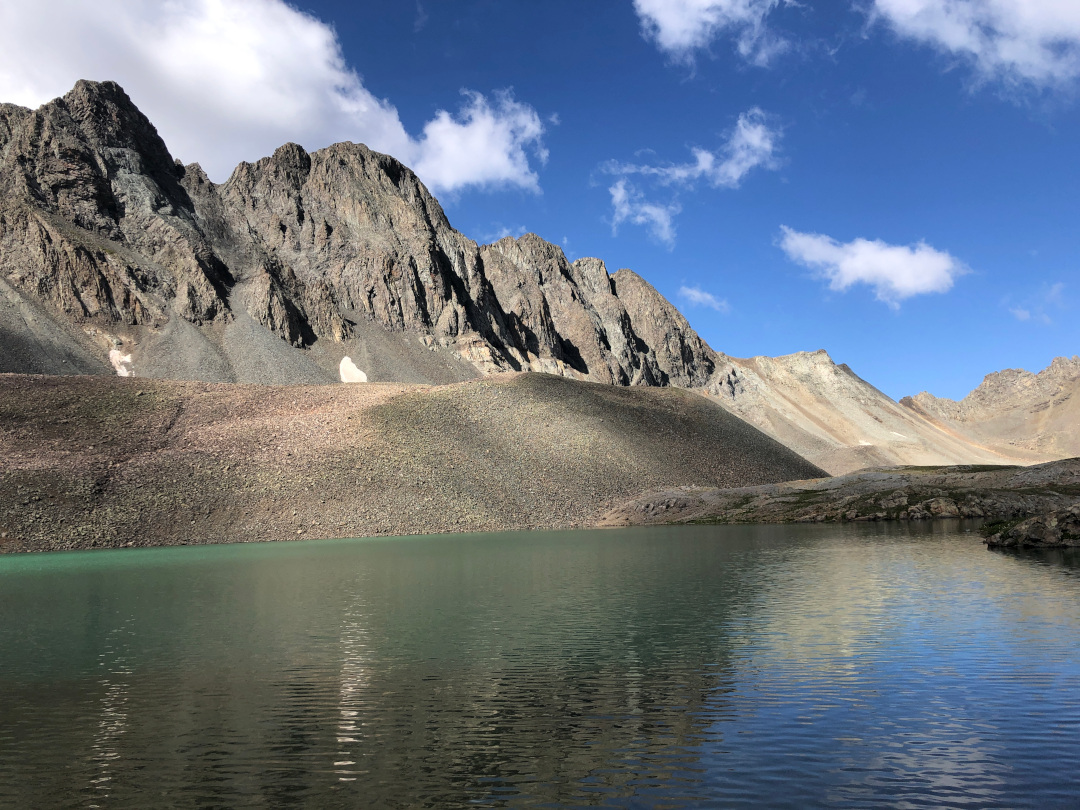 Some people actually swim in Sloan Lake on their descent. No thanks!

After running away from Covid, and constantly thinking about a dear friend who can’t do hikes like this because her lungs are impaired, I stepped slowly and tried to soak it all in. 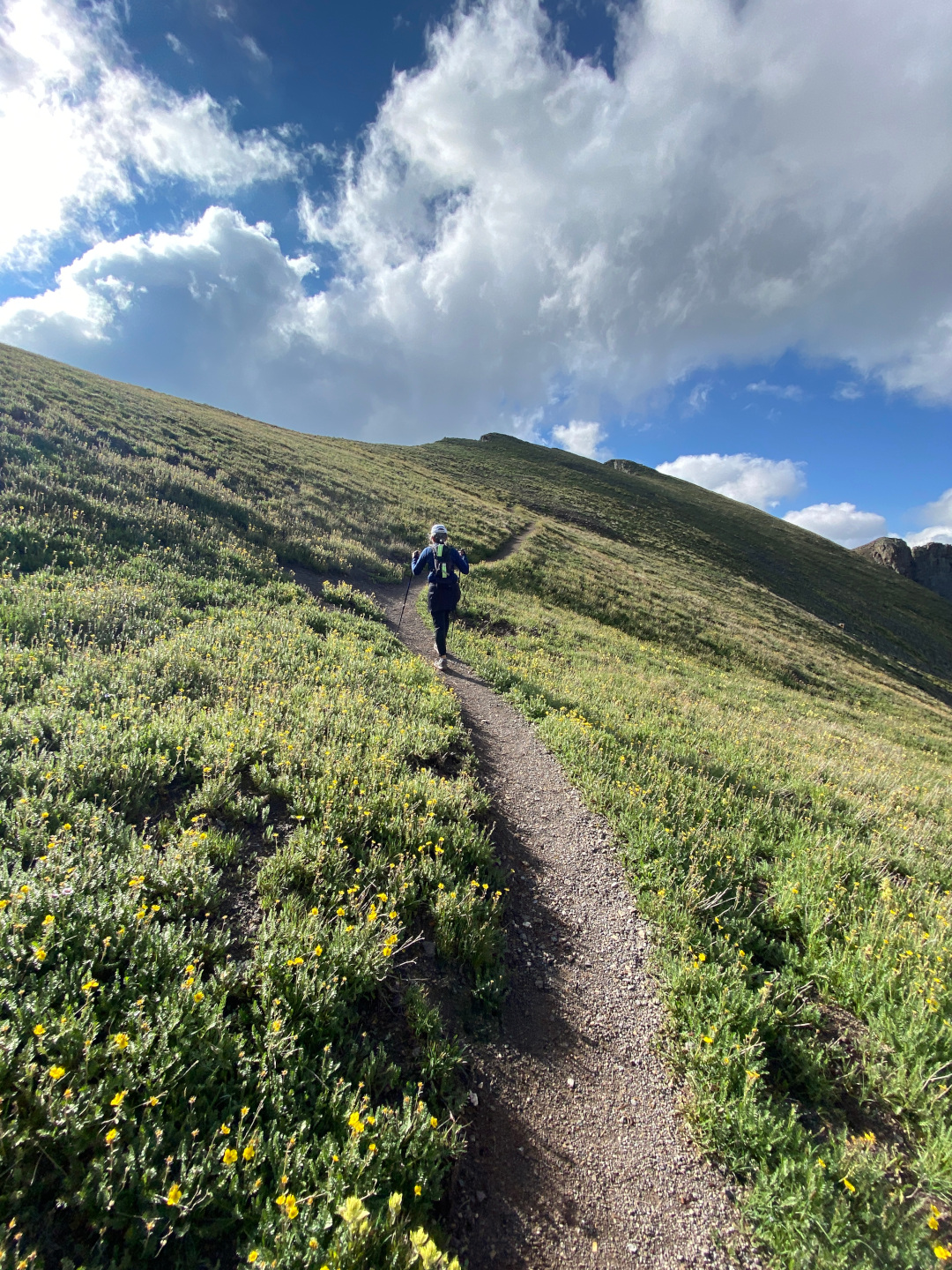 Run or walk, it’s worth the effort if you’re fortunate enough to be there.

More than once I said, “To hell with running this thing!”

Every step was filled with gratitude for the ability to even be on that trail. Here’s a little movie Jim made, that sums up the experience but sill doesn’t do it justice.

Approaching the summit was long, slow, and a little unnerving. With less oxygen in the air, every step is harder than the last. But Jim somehow made it look easy!

When summitting Handies Peak, you won’t find handrails or stair steps. It’s just a faint trail with lots of distance between you and the valley floor. Toss in some strong wind gusts and it makes for quite a hike. 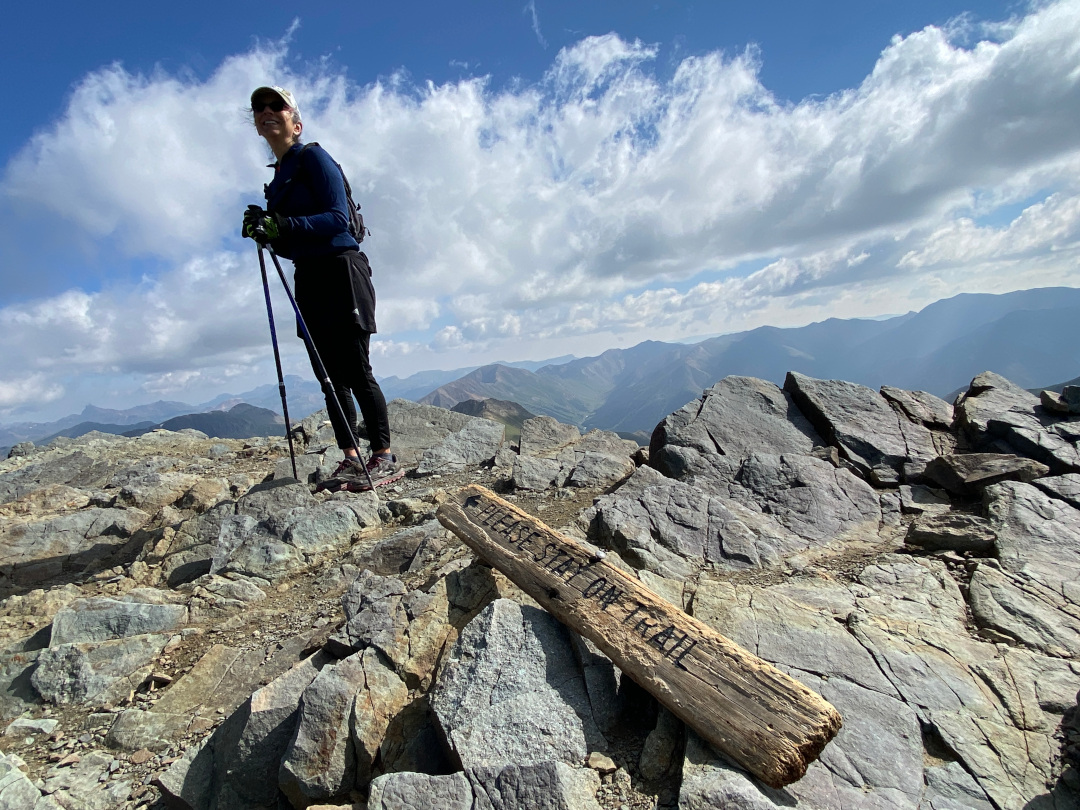 Handies Peak Summit. Thank Dog this is OVER!

There was about a half-dozen people who were already up top. Not too bad. Apparently Fourteeners near Denver are crawling with dozens of hikers, all queued up waiting to reach the summit. I’m so glad we did a Hinsdale County Fourteener instead. 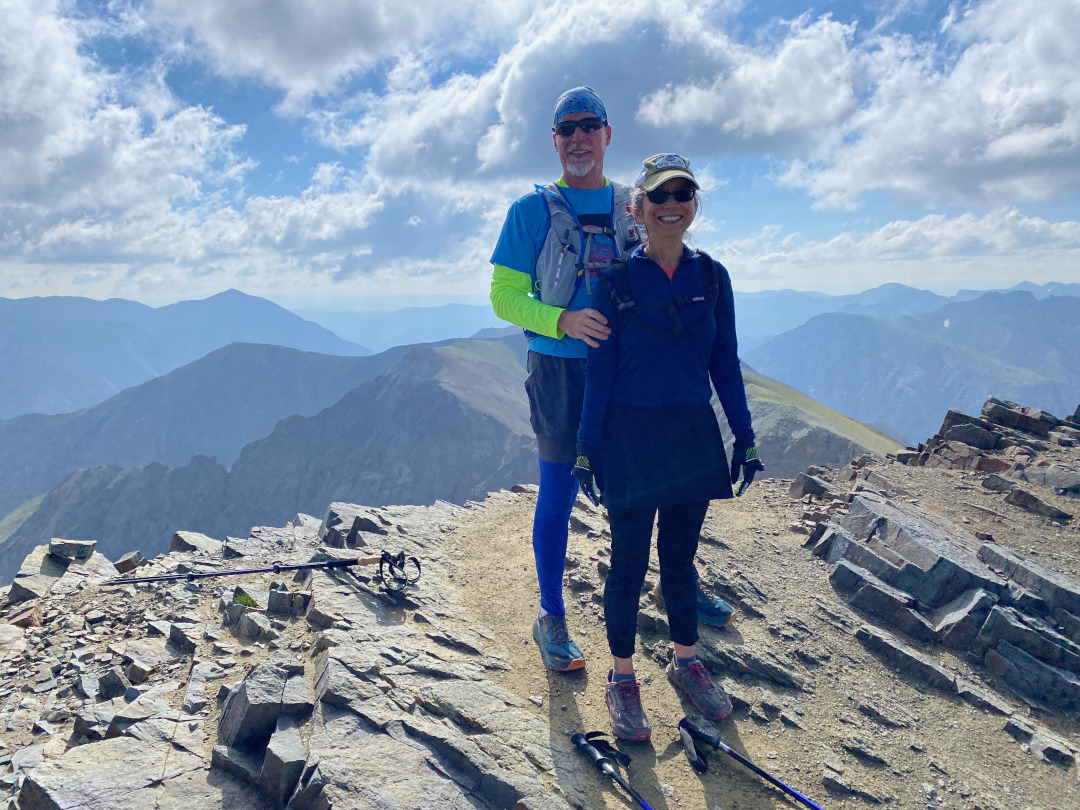 Running down Handies was a blast. Fast, easy, and equally gorgeous. In the end, the 6.95 hike from our truck to the summit and back was not quite the pace I was hoping for, but we did the route in under three hours which made me pretty happy. 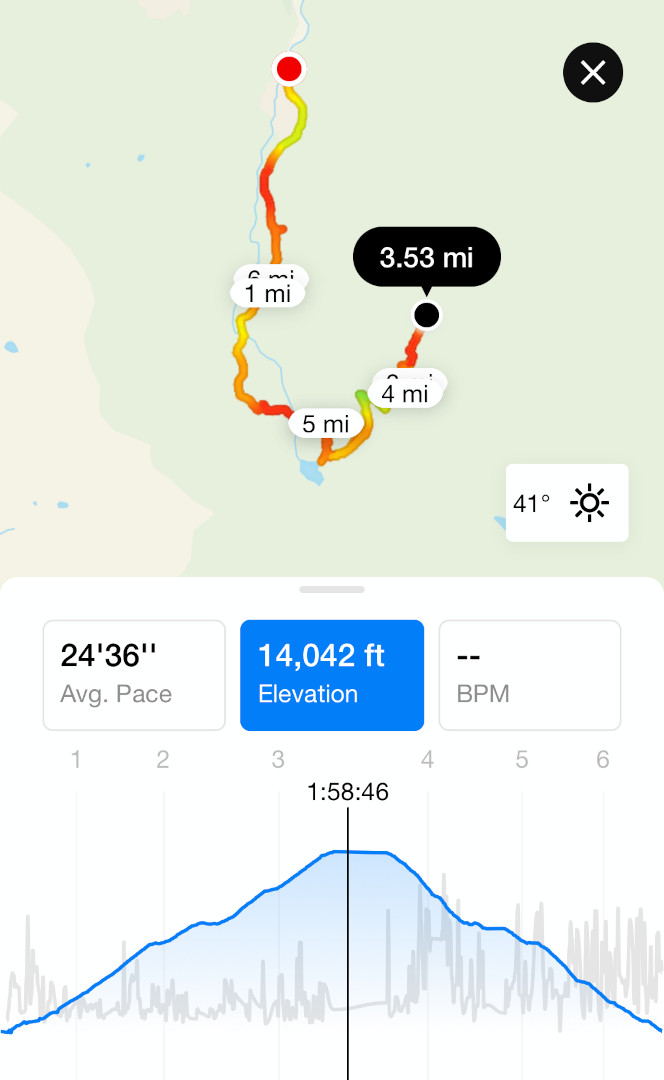 Who says getting old is hell? If our Handies Peak experience is any indicator that this old saying is true, bring it!

8 Responses to “Trail Running Handies Peak at Age 52, Check It Off!”