This time of year we’re usually moseying along from place to place, but things are different this season. In an unusual move for us we’re on a schedule! Yikes!

Snowbirds on a Schedule Get Things Done

After a short two weeks at the Slabs we headed over to the Quartzsite madness for an appointment with Performance Trailer Braking. These awesome dudes put all new hydraulic disc brakes on our rig! I don’t know much about the mechanics of it all but I can definitely say that now I don’t flinch whenever Jim taps the brakes. I’ll let him tell you all about the brake conversion in a future post.

Much to our surprise there was even more scheduled structure after Quartzsite when we headed over to Tucson for the town-wide Gem and Jewelry Show. No, we weren’t there for the shiny rocks. Instead I took a week’s worth of classes from my favorite metalsmith instructor. I had such a blast that when it was over, I pimped myself out to work for her for eight days straight at next year’s show and she said YES! 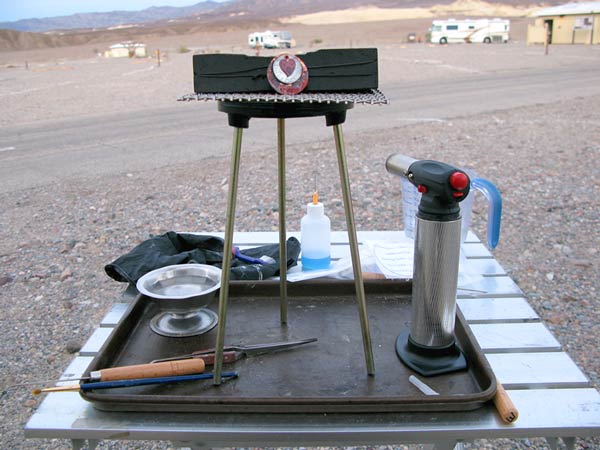 Since I invested a ton of dough on my metalsmithing classes, I spoiled Jim with full hookups at a Tucson RV park! What a blast to live large at the brand spankin’ new Sentinel Peak RV Park that our friends Drivin’ & Vibin’ recently spotlighted.

We agree with Kyle and Olivia completely. This park is fantastic and what I loved most was how it’s biking distance to Tucson’s coolest stuff. This park totally changed my perception of Tucson. I’ll share more about my epic Tucson bike rides next time.

Now that my brain is about to explode with all the new metalsmithing skills I learned, we’re back on the road. Tonight we’re camped out once again at the Marfa Lights Viewing Station, where we’ll bundle up, sip hot cocoa with whiskey and hope those legendary mystical orbs will appear.

Over the next month we’ll be bouncing around our favorite spot on the planet, the Big Bend of Texas. We’ll catch up with the Whitfords at Lajitas RV Park, revisit solitude at Black Gap and then gradually head over to a month long stay in Austin where on March 30 we will set up the Tripawds Foundation’s first ever professional exhibit at the American Animal Hospital Association Conference. Whew!

There’s lots to cover and not enough time but we’ll do our best to show you the awesome aspects of this very special corner of Texas. Stay tuned!

4 thoughts on “We’re Southwest Snowbirds on a Schedule”