The road tripping lifestyle usually gives us time to investigate obscure roadside attractions that most people ignore or just blow past on their rush to get to somewhere else, like Austin’s Cathedral of Junk or the Packer Massacre Site in Colorado. 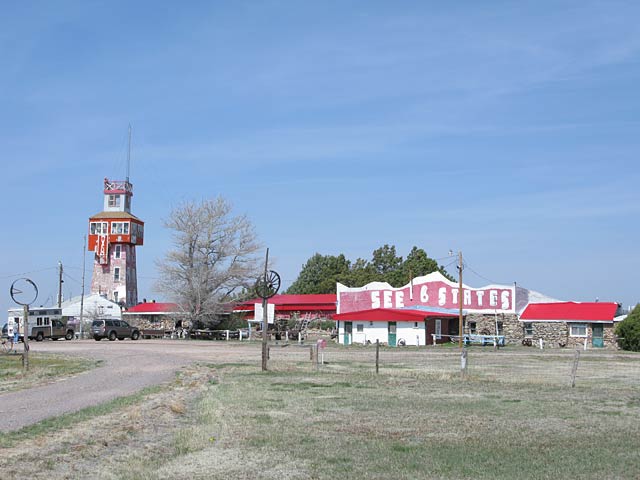 As we booked it back from the Panhandle to Fort Collins several weeks ago, we came into Colorado through the stunningly remote eastern plains region. 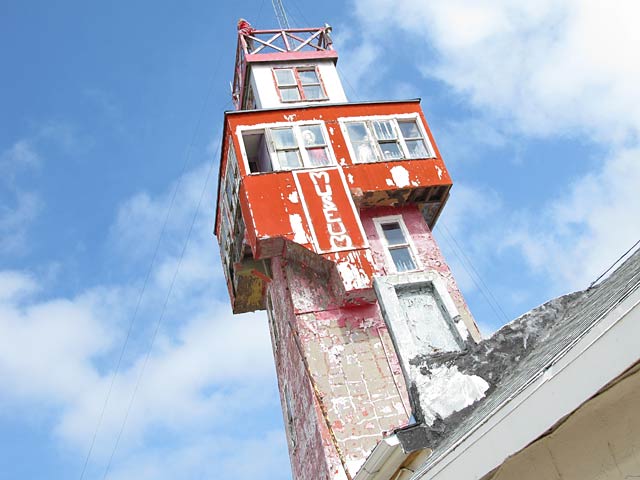 With a name like that, I couldn’t help but wonder, what was it?

That night we boondocked in Hugo, a weathered old ag town located about 20 miles east of the Wonder Tower.

After stopping into the Plains Bar for some good, stiff, cheap drinks, I asked a mullet-headed local sitting next to us “So What’s up with this Wonder Tower thing?” 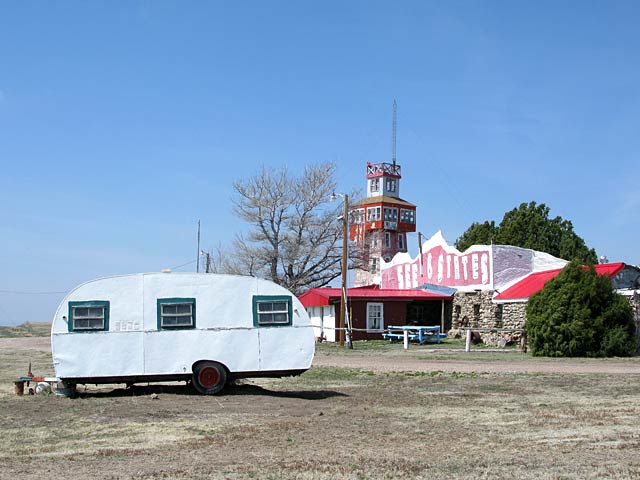 “Oh yeah, that. Well, they’ve got a two-headed goat. Kinda sick but lots of people stop to see it.”

Something about stepping this oddball freak show in the least likely place ever, compelled me to insist that we stop the next day.

After all, how many times in your life do you get to see a two-headed goat? 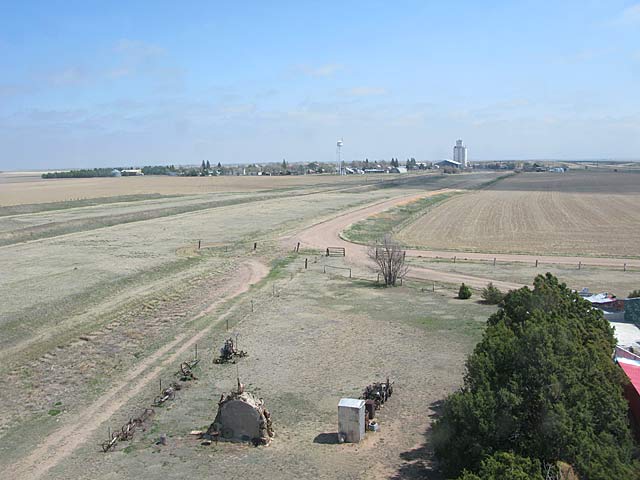 In 1926, a man known as Colorado’s own P.T. Barnum, CW Gregory, decided to build a pit-stop curiosity so amazing it would entice traveling automobile tourists to stop and shell out money.

There, in the middle of the plains, they would fill up their gas tanks.

And after gassing up, they could witness sideshow freaks and an amazing view while perched atop the tallest vista between Denver and Manhattan.

He built a motel, gas station, an “oddities” museum with fake, cavern-like interiors and a rickety tower that promised a view of the six adjoining states on a clear day.

Colorado’s Wonder Tower was a popular Highway 24 stop until CW’s death in 1942, after which the attraction fell into disrepair. 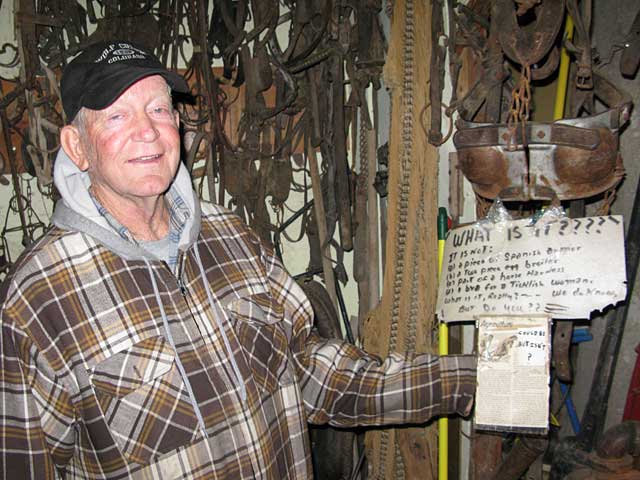 Construction of adjacent Interstate 70 almost killed it entirely, until  Jerry and Ester Chubbuck breathed new life into it over over 50 years ago. Today it remains a must-see pit stop in the middle of no-man’s land.

If you’re traveling through eastern Colorado to Denver, you’ve got to make time for this vintage relic from days gone by.

Guess The Object, Get Your Buck Back

At the Genoa Wonder Tower, you’ll pay just $1 to step right up and see the freakiest, jam-packed collection of objects on earth. 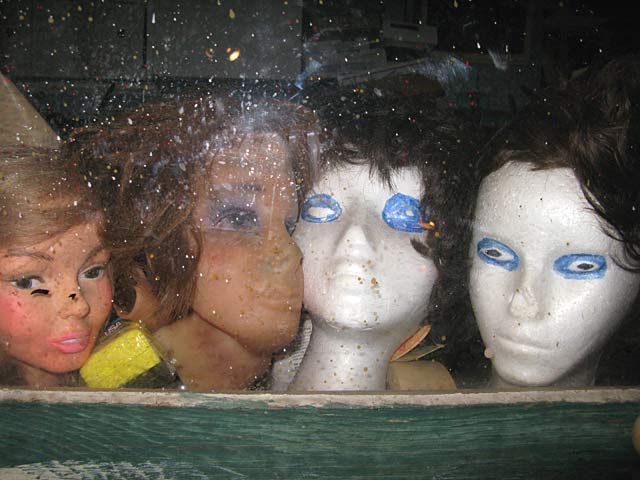 Whether you see it as a huge pile of crap or a fascinating collection of obscure, outdated collectibles is up to you. Either way, it’s worth the effort to pull off the highway.

Where else can you touch and hold antique animal castration devices, peer into thousands of poisonous “medical” tincture bottles, eyeball an eight foot long pickled pig and get your picture taken with a stuffed, two-headed goat?

And of course, you’ll have a chance to experience the “six state view” if you’re brave (and svelte) enough to climb up the ramshackle tower ladder/staircase. 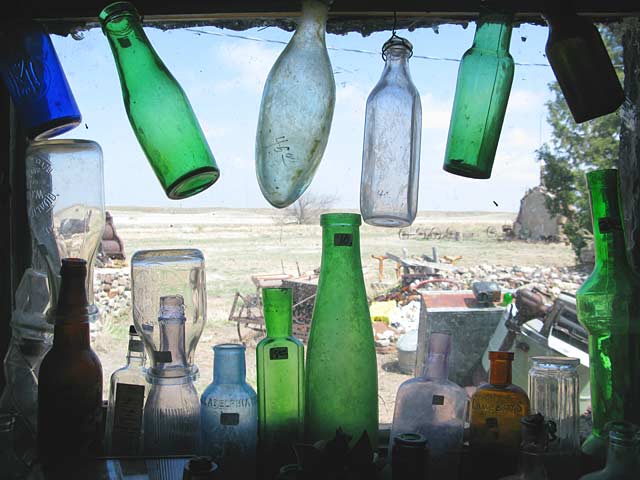 Meeting eighty-something year-old Jerry is as much fun as the stop itself.

As we drove up to the deserted attraction on a windy, ominous looking day, he seemed genuinely thrilled to see us as he collected our $1 admission fee, then greeted us with his “Guess What?” quiz.

While performing his museum docent duties, he would spontaneously hold out his hand to present an array of palm-sized artifacts to us, like a petrified dinosaur turd and a bull nose-ring. 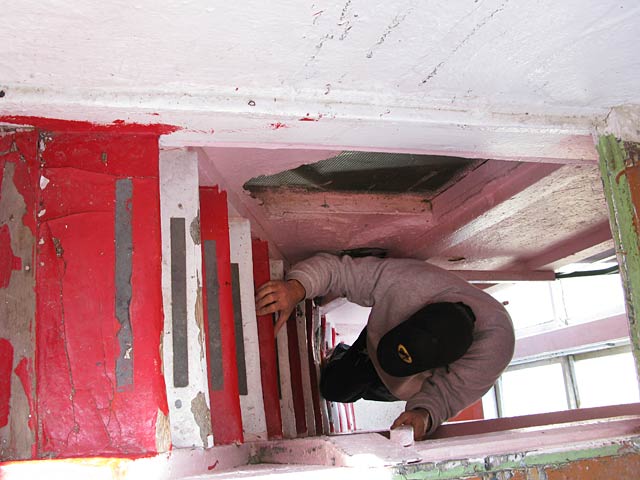 But before he revealed the mystery objects, he told us that if we guessed what any of these Ripley’s-quality things were, we could get our admission fee back.

We flunked the quiz, but like most people, we lingered in the Genoa Wonder Tower far longer than we thought we would, almost two hours.

Trying to walk away was like ignoring a train wreck: impossible to ignore. 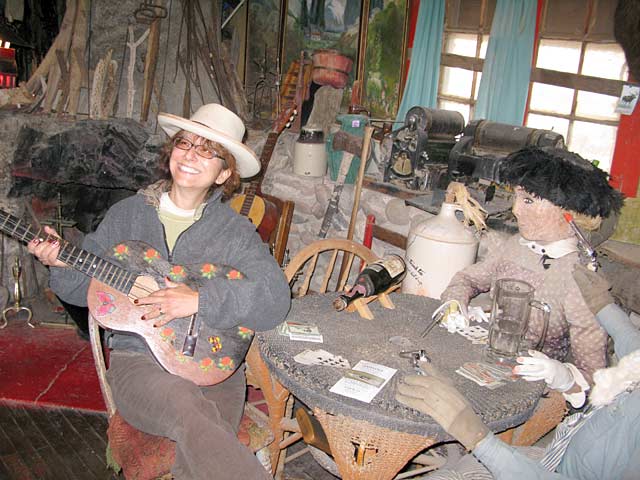 Although we didn’t see six states from atop the rickety old tower, the pack rat in me found it hard to stop examining the thousands of antiques haphazardly nailed to the walls and ceilings.

Did I mention everything in the place is for sale? Sometimes for ridiculously high prices.

But the sticker shock of seeing an insignificant, $45 glass bottle is just one of many things that makes this place so bizarre.

At every turn, there was Jerry, cracking corny jokes until the next sucker arrived.

The Wonder Tower is like a cross between a real-life Steven King novel and the biggest flea market freak-show on earth. 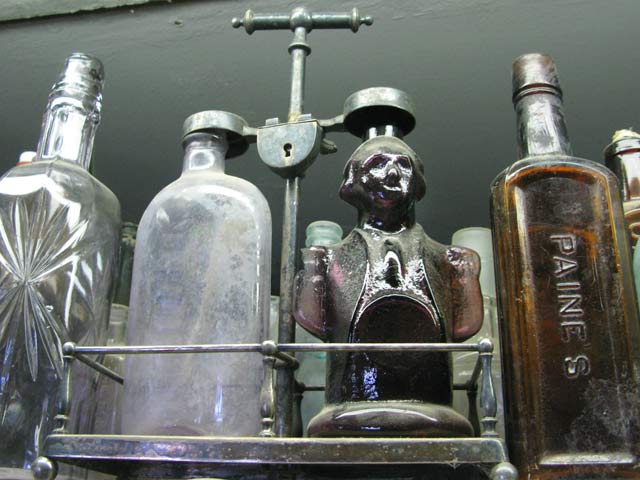 Walking through the maze of cavern-like rooms was like meandering through an indoor labrynth filled with crap everywhere we looked.

Jerry won’t be around forever, and it’s probably a safe bet that no sane person would be crazy enough to buy this attraction when he kicks it. So hurry up and get there!

The next time you’re speeding across Colorado’s Eastern Plains on I-70, be a good road tripper. Let off the gas pedal and make time to check out the Genoa Wonder Tower. 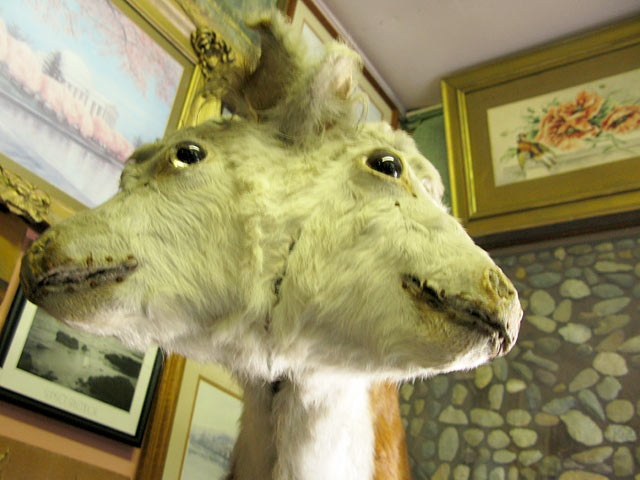 Even if you just want to see your first two-headed calf, the detour is entirely worth the effort and your hard earned buck.

This is Americana at it’s best. Don’t miss it!