I used to think bluegrass music was the dorkiest, most white bread music around. In high school, my friend Renee and her parents were big fans of old time country, and I could never understand why.But like coffee and booze, for me, it became one of those tastes I acquired in adulthood. It started growing on me when my friend Don Wolski was hosting the Bayside Hayride, on KHSU in Arcata, CA. Shortly thereafter, I caught the Compost Mountain Boys live at Humboldt State University. Then, the O’ Brother Where Art Thou?

movie came out. Once I heard the O’ Brother Soundtrack 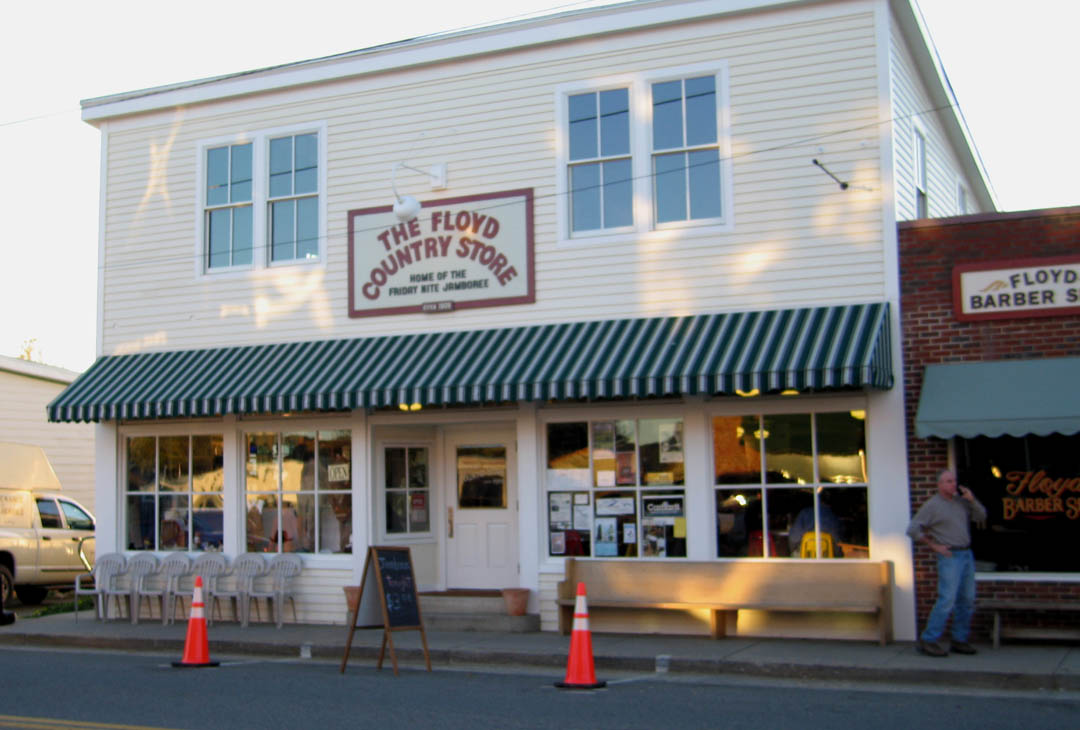 Getting to The Floyd Store was like arriving at the center of the bluegrass universe. It’s one stop of many of Virginia’s Heritage Music Trail, the Crooked Road. This road connects major music venues, art galleries and small artsy towns throughout southwest Viriginia.

At the Friday Night Jam, for just $3 you get to see the rising stars of the region. But leave your booze laden, foul mouth at home; Floyd’s operates on Grannie Rules: No Smokin, No Drinkin, No Spittin and No Cussin. 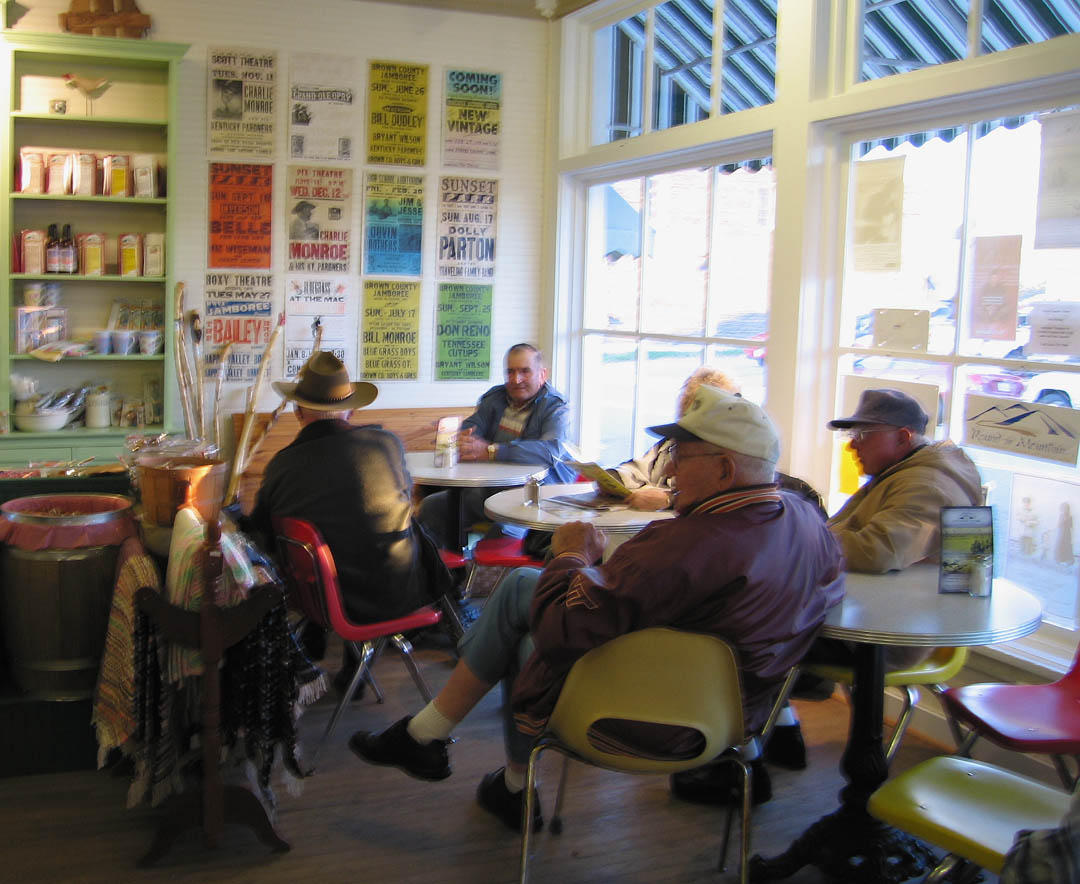 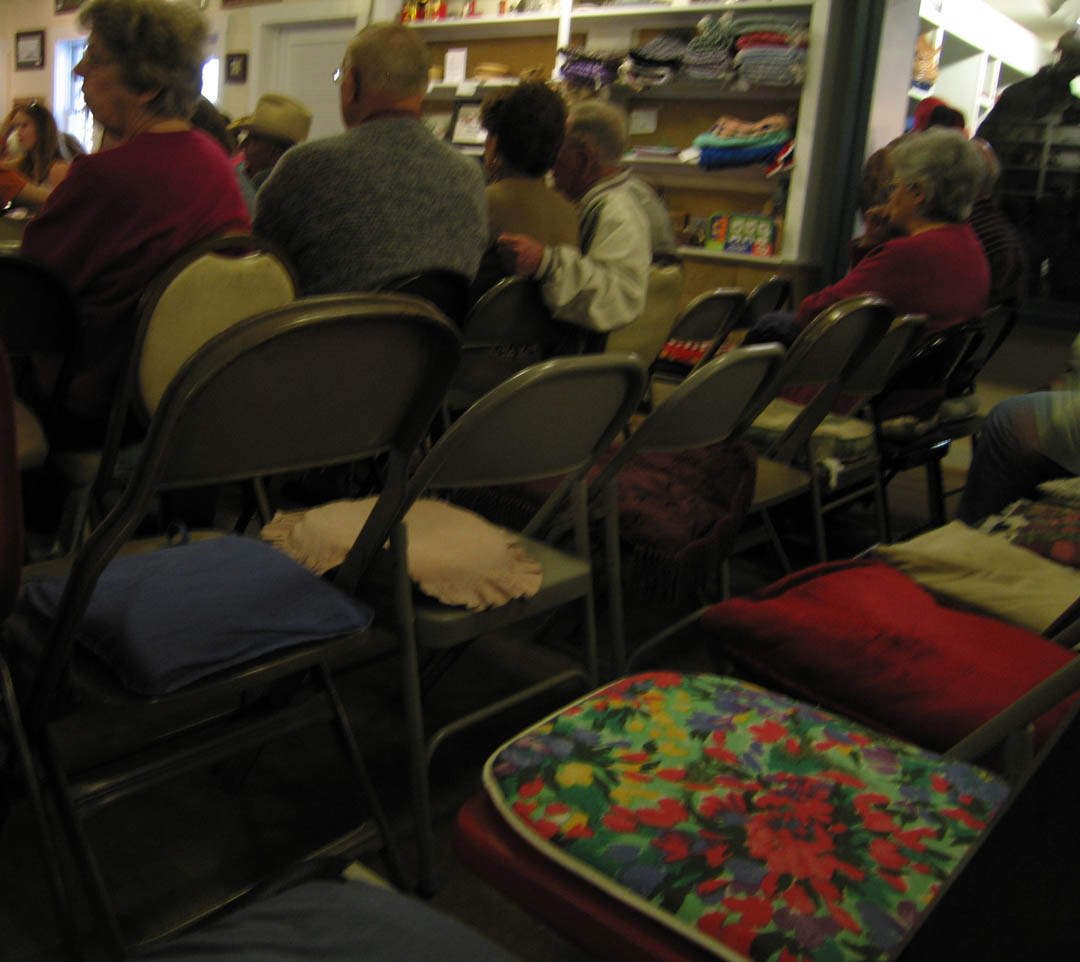 The locals filed in about an hour before starting time. These regulars knew the routine, even brining their own chair cushions. As they walked in, their tap shoes clanked against the hardwood floor. 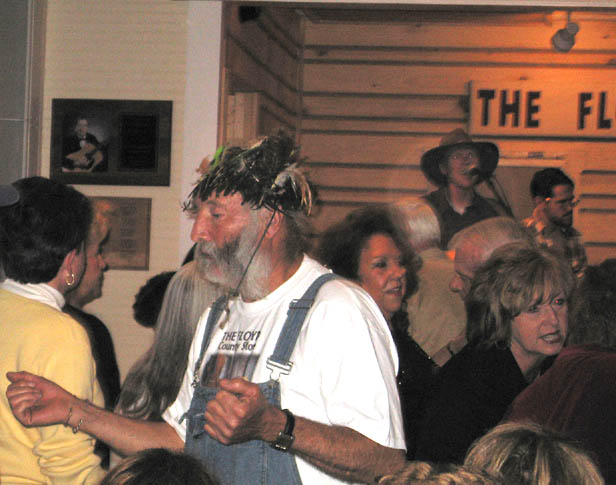 The diversity of people coming to hear the music was beautiful. Gray haired grannies, longhaired Rebels, old married couples, kids, teens, farmers, cowboys and a variety of folks who look like they just might have left their unplumbed chicken shack in the woods for a few days. We all had something in common; a true love of the music. 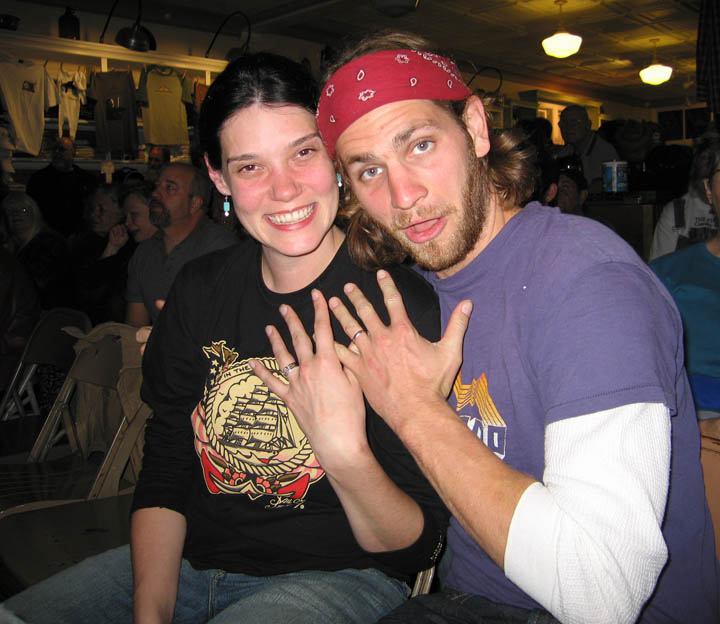 Behind us, a young couple sat down, just all giddy and smiling. They were really cute, and just glowing. You could just tell: they were one of those loving couples! And of course they were.

Sara and Adam Brinson of Chapel Hill, North Carolina, had just gotten hitched! They were on their honeymoon. Good Luck Sara and Adam! 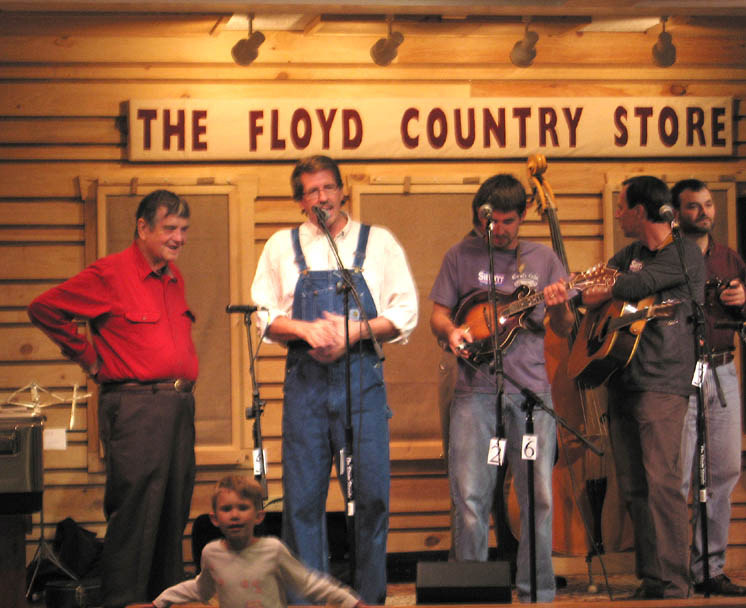 The show always begins with a prayer, and a gospel act. Tonight, in between sets, Floyd’s owner introduced the founder of the Crooked Road, who’s name we didn’t catch. 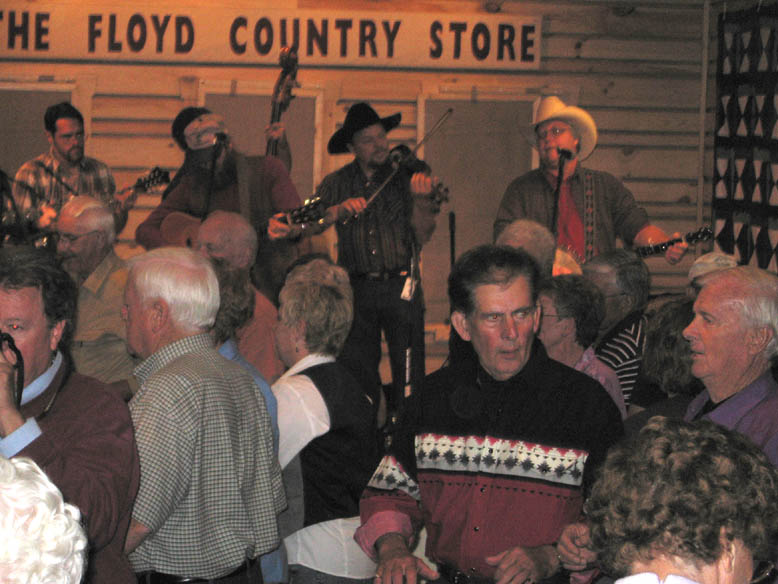 The Jugbusters, were just starting to get things moving, when they got interrupted by a swarming group of Virginia politicians, media and hangers ons. They worked their way up the aisles, shaking hands all the way to the front. as the music was playing. 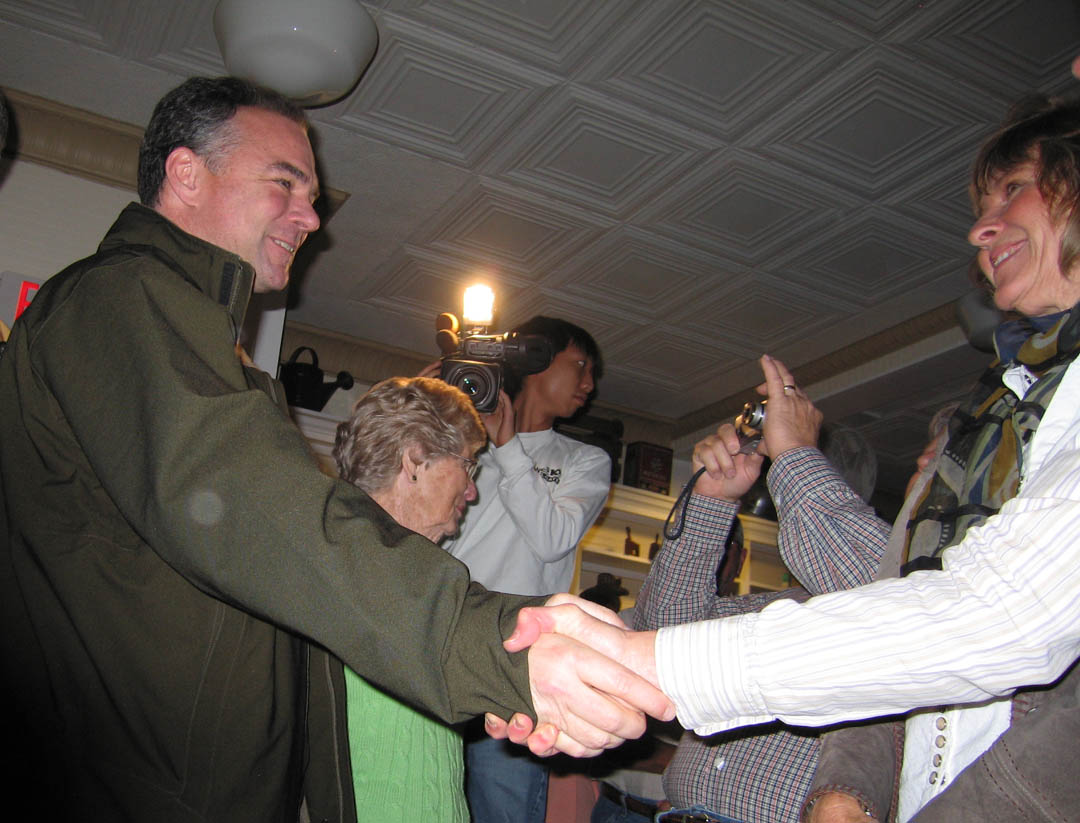 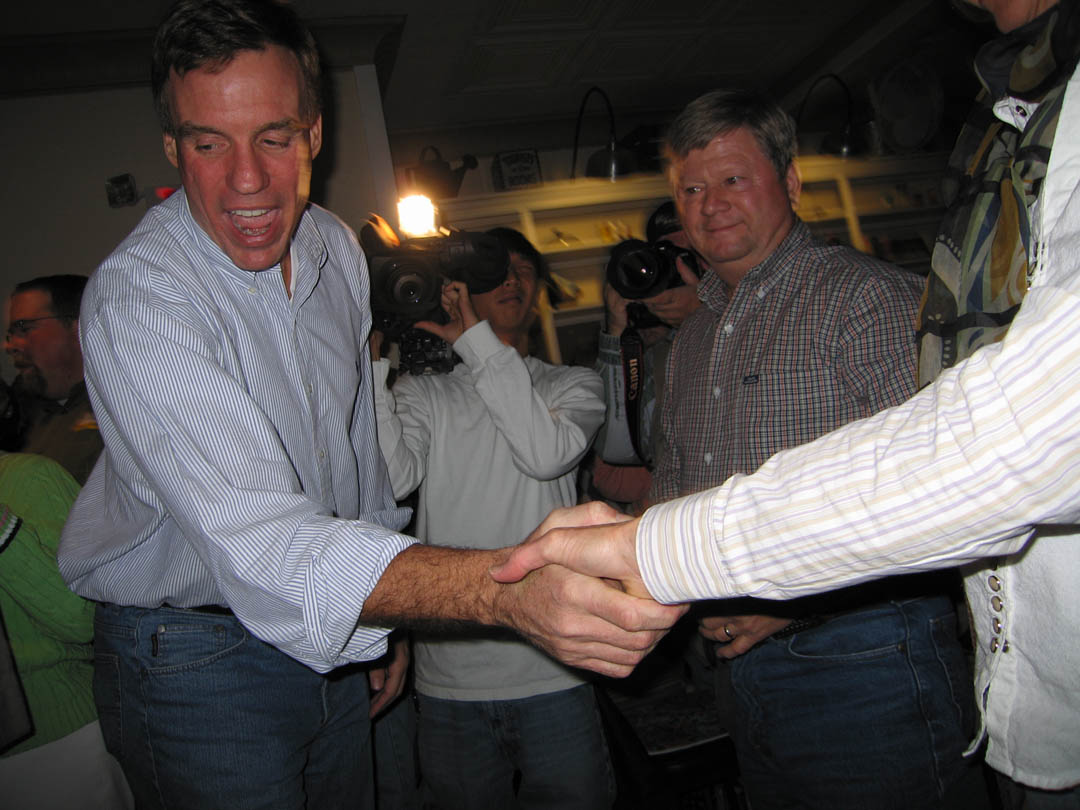 Not being familiar with Virginia politics, we had no idea who was who, but we shook these Very Important Guy’s hands anyways, being thrilled at the chance to meet a governor up close and personal. I told Warner that he kicks butt over my own state’s governator, and he replied with “That’s an easy thing to do.”

Back at the rig, I learned that both Warner and Kaine are decent Democrats who have been instrumental in improving Virginia’s economy and rural areas, are advocates for smart growth and defenders of the environment. Kaine is rumored to be Obama’s pick for the Vice Presidency in ’08. Huh? I thought Virginia was a red state? 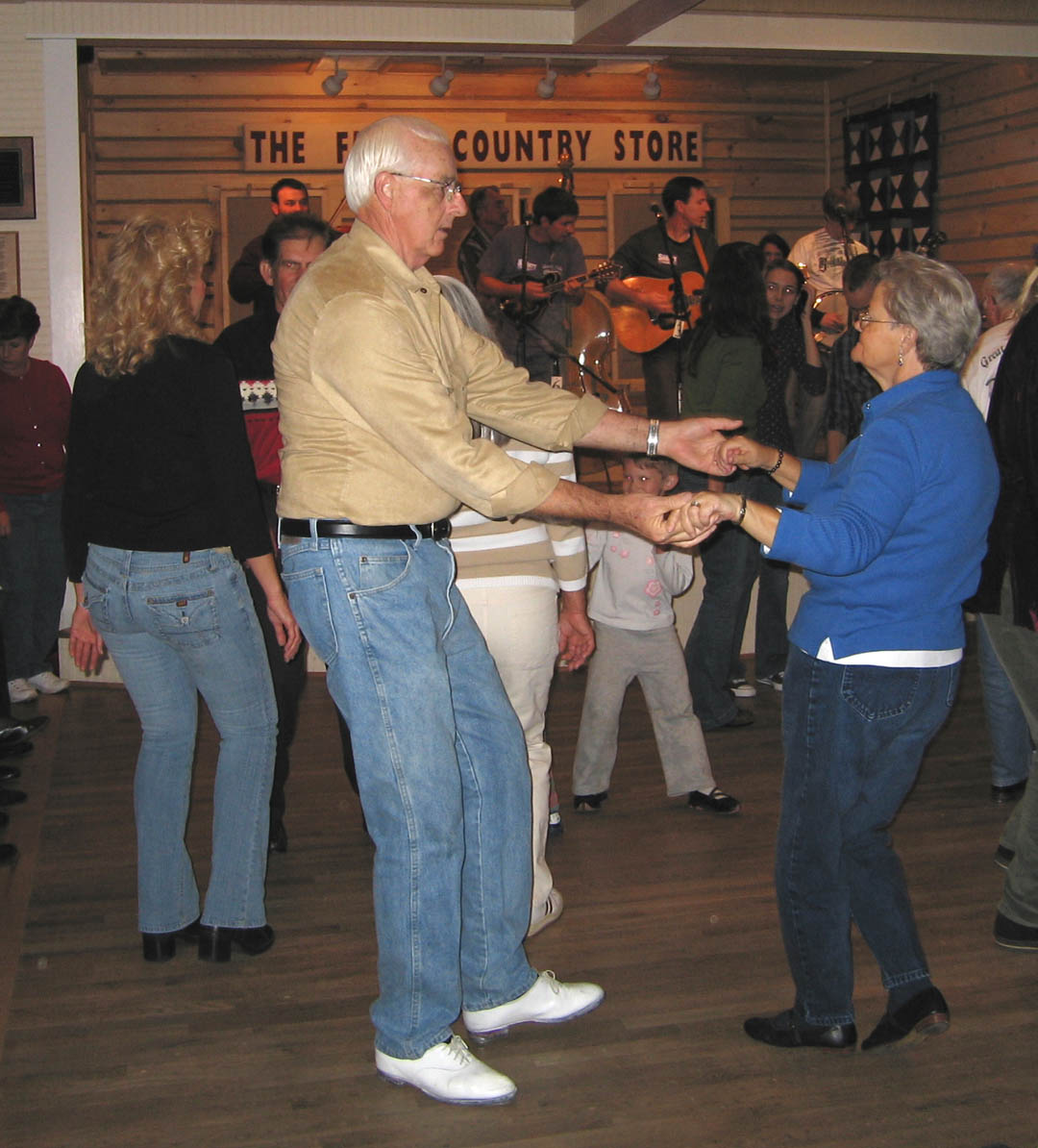 Once the politicos left, things got back to normal, and the locals tore up the dance floor. Even Jim danced with me, a somewhat rare occasion. A reporter later asked Jim whether hi believed it was right for the politicians to come. Jim said it was fine that they cam, but the show should not have stopped for them in the middle of a set.

That whole clogging dance routine is a kick! I loved smacking my hard soled cowgirl boots down on the floor. Friday night at Floyd’s was the best time I’d ever had while stone cold sober. Someday I’d love to go back, only next time, I’ll be sure to wear my taps.

6 Responses to “Those Dems Can Play! VA Governors Jam Bluegrass at the Floyd Country Store”