Technically our latest musical detour may be the first rock and roll concert we’ve attended since hitting the road. But technically, it was also more of a punk rock concert. But it didn’t quite start out that way.

We had never been to Washington’s in Fort Collins, Colorado. But we may just have to return if another favorite band makes an appearance when we are in town next. It is an intimate venue, with great lighting and decent sound. I found the ProX mixing board appropriate for this show in particular. 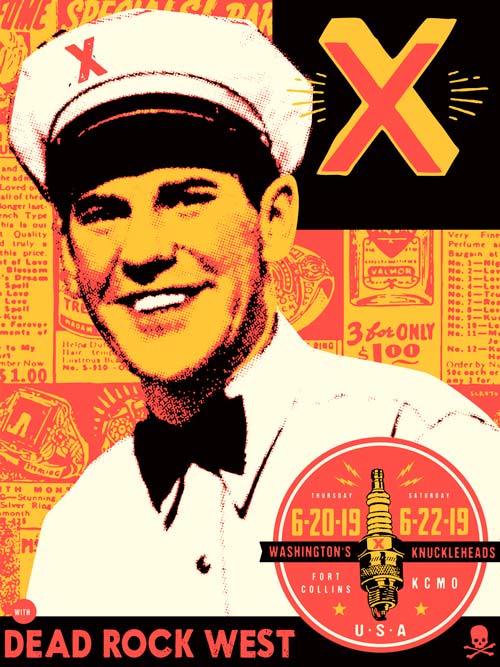 As a screenprinting fan, I had to steal this cool show poster from the Dead Rock West Tour Dates page. Most of the shows we’ve seen have had more of a country flare – though come to think of it, the Mavericks are pretty rock and roll. But before this show started, Rene wondered why the house music was rather hillbilly. We found out when the opening act hit the stage.

The Dead Rock West duo of Frank Lee Drennen and Cindy Wasserman remind me a bit of Timbuk 3, yet not nearly as quirky. Drennen has a definite young Johnny Cash vibe, and even resembles a younger John Doe, in my opinion. Doe even produced their latest album More Love, and Exene kicked off their set by thanking Dead Rock West and saying they are her favorite band. They did put on a passionate acoustic performance, with a fairly folksy flare.

The seminal rock band X hit the Los Angels punk scene in 1977 and successfully crossed over to rock and roll without selling out or becoming to pop and mainstream. They never lost their edge, and obviously still have what it takes to rock the house.

Forty years! That anniversary tour has apparently been going on for a couple of years now. My earliest memories of X stem slamming around to tunes from their first album, Los Angeles, and I really got into them after their third release Under the Big Black Sun.

“Our harmonies are somewhat perfected, our souls are still in tact, and against all odds, maladies and distractions, all the set backs and obstacles- we are still here! Just some friendly advice- you should probably come see us play while you still have the chance. Not that X is going away anytime soon!” ~Exene
from xtheband.com

Years later, I was happy to hear them still rocking on what I once heard John Doe refer to as “that Jesus album” – Hey Zeus to be specific. I think I first saw X some time in the mid to late-eighties, at the Crest Theater in Sacramento, and then again when they opened for David Bowie at Cal Expo.

But enough of the discography. We last saw John Doe perform a solo set in Arcata, California back in 2006 or so. Even that was more than a decade ago, so I gladly and quickly agreed to go when Rene discovered X would be playing Fort Collins!

If anyone ever asks me who my favorite drummer is, my answer has always been DJ Bonebrake. Sure, Neil Peart ranks up there, but I’ve never seen him do a headstand after his set. Granted, I’ve never seen Rush live, but I doubt that ever happened. 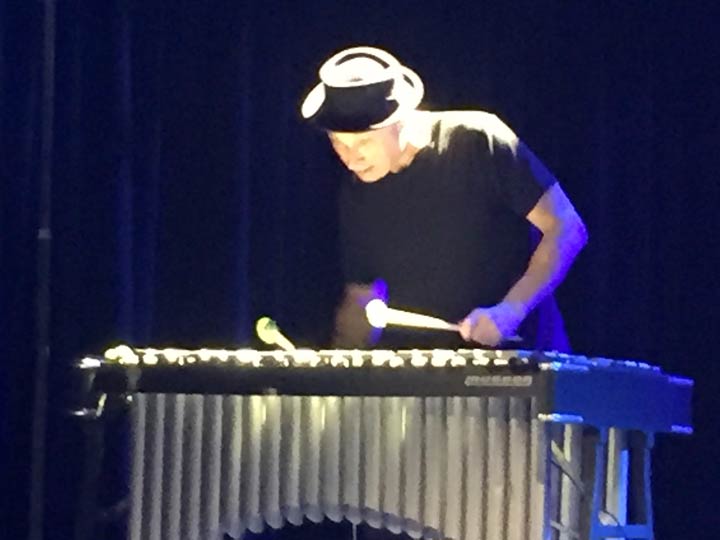 It was fun to see DJ play the vibraphone. John explained that was only possible since Craig Packham has joined the band, filling in on drums and rhythm guitar. “We finally get to perform these songs live,” said Doe. “We couldn’t do that back when they were released on studio albums,” he added. Or something like that.

I only had one complaint about this fantastic show, and that’s the family that showed up next to us. We grabbed front row spots at the stage with full intention of bouncing about. As the crowd filled out, Family Guy and his kids appeared, and the teenage boy stood right next to me. That’s fine, but he did not budge on bit during the entire show. He was wearing earplugs, as was his dad. And that’s just fine too. But if you want your kid to experience a rock concert, risk a little inner ear damage and show him how to dance!

We joked with fellow old X fans prior to the show, about whether or not a mosh pit would form. “I took a nap earlier so I can stay up for this,” one guy said. I replied, “Can we still jump off the stage?”

Sure enough, a small crowd started moshing about, and a young lady jumped up on stage. The crowd wasn’t quite dense enough for her to dare jumping. She signaled for everyone to gather close. I tried, but the kid in front of me gave a dirty glance over his shoulder, completely unaware of what was going on. She should have jumped anyway. Security guards tackled her and dragged her off stage. Clearly not used to such behavior, the handled her rather roughly. While they restrained her off-stage, Exene approached them in a middle of a song to console the fan – and presumably scold security – picking up her lyrics without a hitch. Some things never change.

I think it’s supposed to be a long strange trip or you’re doing something wrong. ~Exene