We’ve been searching for years for the best RV toilet treatment chemical and I think we might have found it.

A Stinky Road to the Best RV Toilet Treatment

For some reason we never had such a stinky black tank in our old 245N Arctic Fox fifth wheel. We could go at least a week before it started getting rank.

But the one in our current 275B isn’t as kind on the olfactory senses. When the weather heats up, look out! Just five days into filling the black tank, things get a bit, err, offensive when the toilet gets flushed and the odor blows out the roof vent.

We know the roof vent isn’t blocked. And our poop doesn’t stink, so the location of the tank has got to be the culprit. Northwood thought it was a good idea to place black water storage directly underneath the toilet. Maybe that’s so you can literally look down and tell when it is getting full. Seriously TMI gross, I know.

For the last four years since buying this rig, we’ve looked for the best RV toilet chemical. But now I think we found the one that actually omits the stench.

The RV Holding Tank Treatment that lives up to its claims. 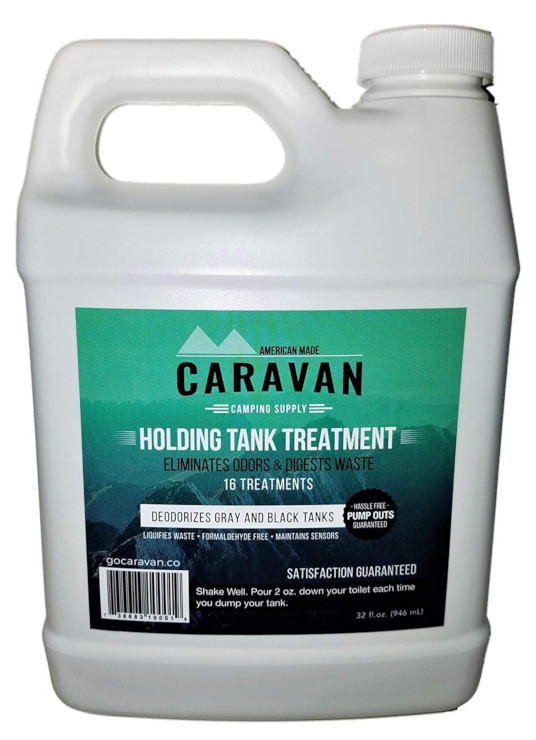 It’s called “Caravan Full-timer’s RV Holding Tank Treatment” and we’ve used it for over a month. We know it works because we can go longer without an offending flush.

The company doesn’t give too many details about the formula, other than claiming the hungry microbes inside every bottle will break down solids and eat away the odors. Better them than me, I say.

We had previously tried microbial based RV septic tank treatments that didn’t work. But this one does. Just come visit us about a week after we land in one spot. You’ll notice right away!

It does cost more than the usual RV holding tank products, but I think the price is reasonable and not nearly as expensive as other similar black tank deodorizers.

And besides, who cares about the price? Can you really put a cost on a rig that doesn’t smell like a sewage treatment plant? That’s priceless in my book.

If you give Caravan a try let me know.