Two weeks ago while camping in Sedona, we got to show the world why #RVingIsForEveryone when a Camping World video crew came to capture the reality of our full-time RVing lifestyle. 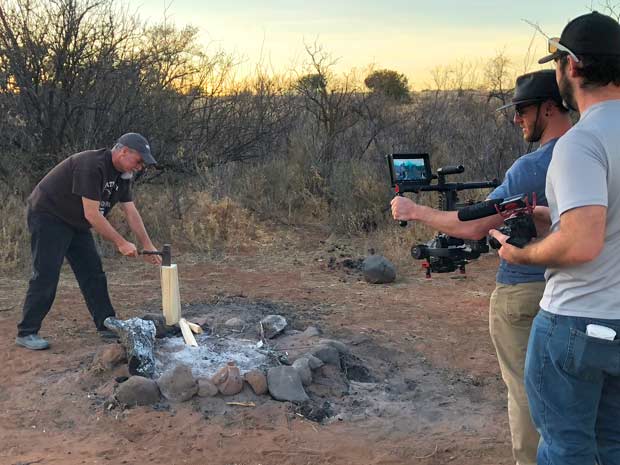 When our time in Tucson was up, we headed north to Red Rock Country where we met up with the Isaac Aaron Media team. Tasked with showing the world how it’s possible for anyone who has the desire to make the leap to full-time RVing, they are filming people like us in our native habitat. 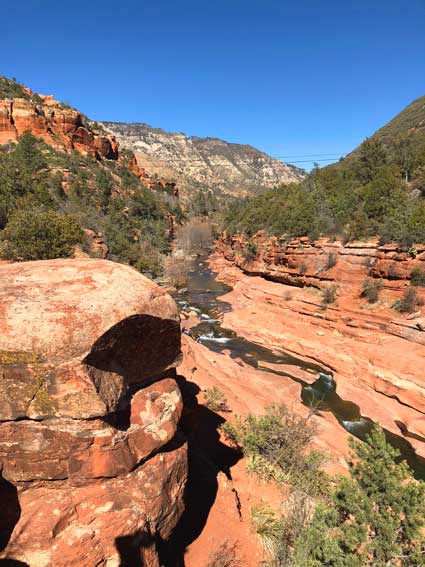 Filming weather couldn’t have been better.

When Camping World contacted us to be part of the campaign, we wondered, “Why us?” but figured what the heck! Camping World is a great company (is there an RVer out there who hasn’t shopped there?). Plus, the CEO Marcus Lemonis is an awesome business leader who has our total respect and admiration. What could be better?

Before accepting, we watched completed videos from the #RVingIsForEveryone campaign. That’s when we knew it was something we would be proud to participate in. See for yourself.

Back in Sedona, the crew wanted to film us camping in our usual environment, so that meant heading out to a wide open dispersed and free camping area between Cottonwood and Sedona. Sunshine and warm temperatures greeted us for the three solid days of filming. 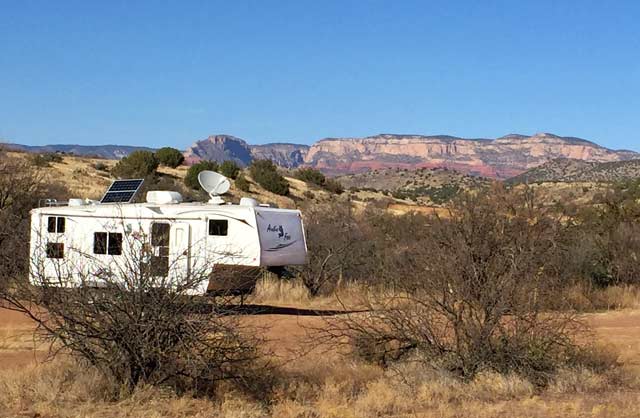 Free camping at its best on forest service land.

While waiting for the crew’s arrival, we cleaned up the rig and vacuumed dog hair off the furniture. Our nervous anticipation was reminiscent of our 2009 filming for the PBS’ Why We Love Cats and Dogs. That video shoot was a completely different scenario in which our Jerry was the focus, but we couldn’t help but think back on that experience and wonder if this one would be just as fun and interesting. 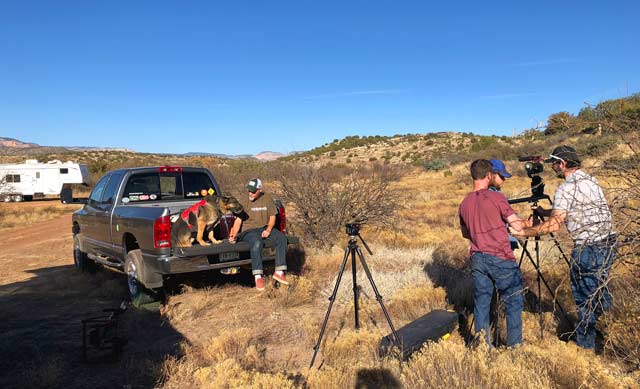 Jim and Wyatt wait for their close-up.

In short: it was! The Isaac Aaron crew were so much fun to be around. They helped us articulate what it’s like to live this way and were total pros at squeezing all the equipment into our RV. 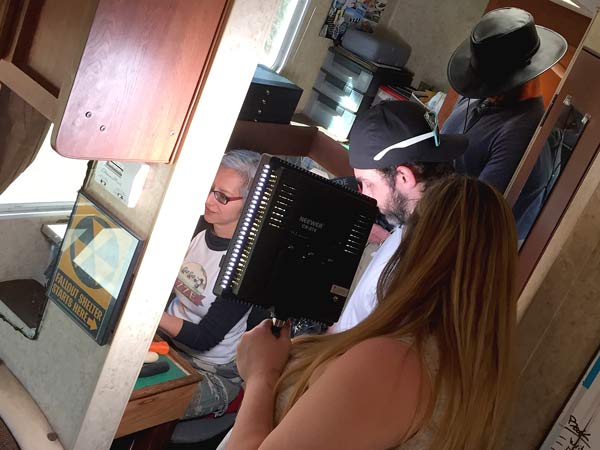 Feeling like I’m being watched while banging on metal.

They also had ultra geeky equipment trailing us. Ringleader Isaac sent up a drone to follow us around Sedona and the campsite area. It was a bit freaky being watched from the sky (and I’m sure annoying to nearby hikers). 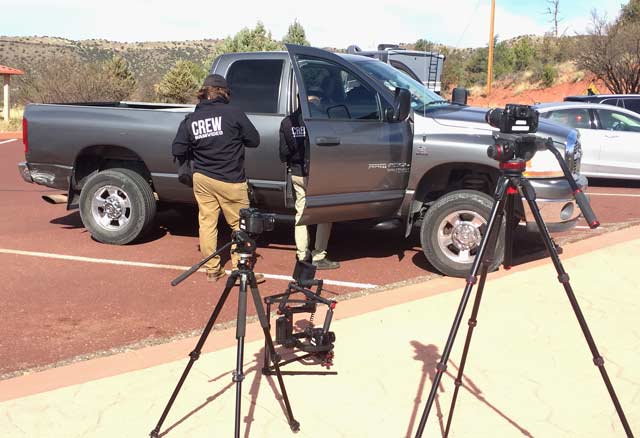 The crew installs a camera in the Dodge.

The weather totally cooperated for all the fun things we did around Sedona in front of the camera, and the crew asked great questions about our ten years on the road. 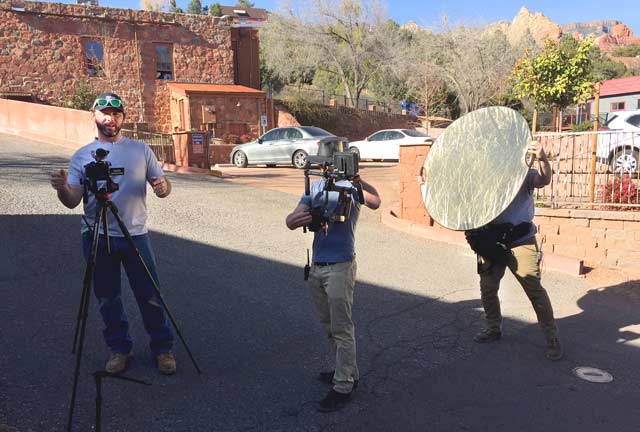 We hardly noticed Isaac and his crew were there!

Even Wyatt appreciated their professionalism. He got plenty of camera time when they strapped a Go-Pro camera on his back! 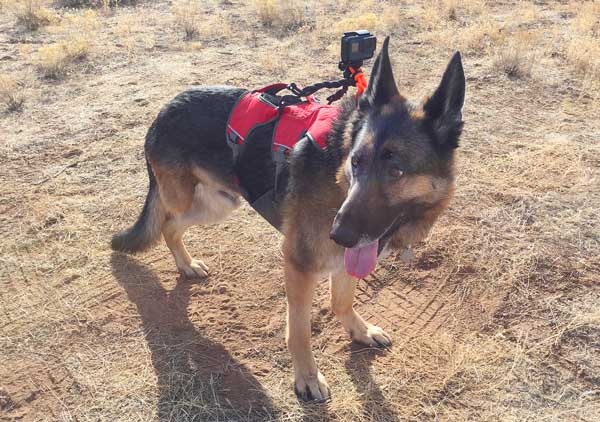 “OK let me show you how camping with dogs is done.”

The three-day shoot went from 10 am until dusk, all for a video under five minutes long. Crazy! Were we nervous? Sure, a bit. And although there were lots of things we forgot to do and say on camera, we couldn’t be happier with the way things went. 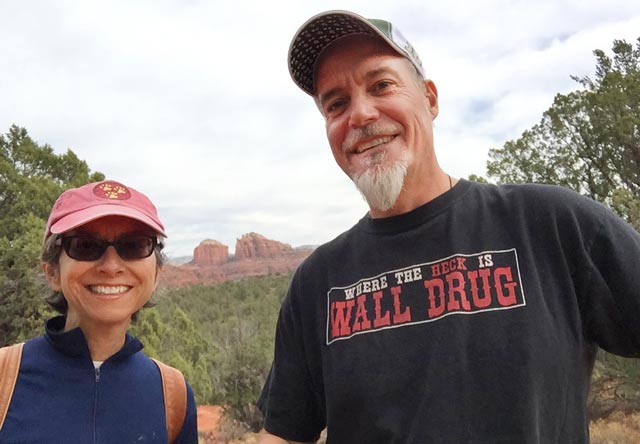 Telling the whole story was fun!

The final video should be up soon and you can bet we’ll share it here.