Free unlimited broadband for full-time RVers is a dream for many vagabonds like us. This summer we’re getting a sweet taste of it while workamping at Vickers Ranch. The owners just installed new, faster wifi and although there are many reasons why we love coming here, this is in our top three (right underneath hay season and guest appreciation night). 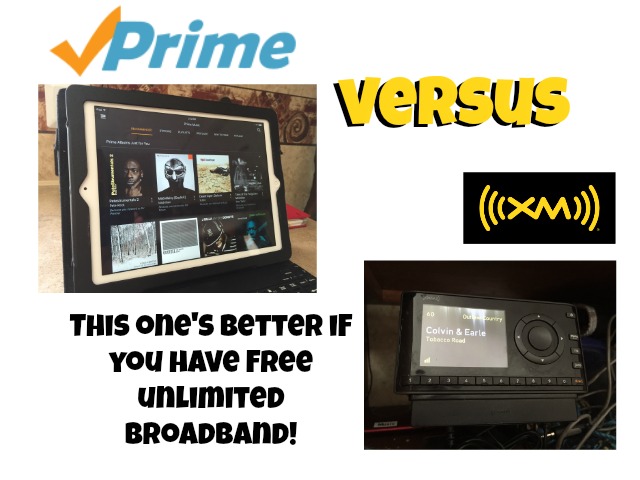 We’re trying to stick to shopping local in Lake City all summer so we took advantage of Amazon Prime’s monthly subscription rate. Now you can get it on a monthly basis for just $10.99. In the past we’ve been too frugal to pay the $99 yearly fee.

The yearly Prime fee is worthwhile if a full-timer has free unlimited broadband. After all, Amazon Prime isn’t just about fast two-day shipping, it’s about video and music streaming too.

But since we’re normally not part of the cool kids and our Verizon and RV DataSat bandwidth costs us a bare minimum of $175 a month, we’re super careful about downloads. That all changed now that we’re parked with free broadband until Labor Day. We’ve been total bandwidth gluttons!

How Amazon Video and Music Stacks Up to Satellite Radio

Nine years ago we gave up TV without any regrets. OK maybe the Daily Show was the only thing we missed. But now that we have Amazon Video, we’re pretty impressed at what’s out there. Sure, there’s some crap, but it has many intelligent choices that aren’t available via satellite TV or (gasp!) network TV.

And as much as I hate to admit it, Amazon Prime Music is even better.

I never thought I’d say that. After all, Amazon is The Devil to me. But they’ve done it right with Prime.

For nine years, we’ve been XM satellite radio subscribers because we grew tired of broadcast radio blather. With the exception of miscellaneous public radio stations and Coast-to-Coast, the airwaves are full of crap. Satellite radio has been a breath of fresh air and it’s introduced us to lots of new music.

In many ways satellite radio is better than Amazon Prime Music because:

When it comes to the cost of Amazon Prime Video and Music versus satellite radio, it’s really about the same. Satellite radio’s monthly price is comparable, but it depends on what packages you choose — and how good you are at negotiating a subscription rate. Yes, you can do that. Some day I’ll tell you how.

So if you’re in an area with free unlimited bandwidth, take advantage of Prime for the month.  We are, and until Labor Day we’ll be stuffing our faces with all the bandwidth and downloads we can gobble up. We might have withdrawal when we quit Prime, but after three months in one spot, I know we’ll be ready to leave.

4 thoughts on “Free Unlimited Broadband for RVers is Pure Gluttony”