In the middle of nowhere on the way to Big Bend National Park, you may miss the Prada Marfa Store if you blink. The first time we saw it fly by, we had a classic double-take moment. I was actually more focused on the UFO in the distance, which turned out to be a Tethered Aerostat Radar surveillance balloon.

There is no door, but complete with pricey pumps and a placard describing the artist’s intentions, the Prada Marfa store has stood along this remote stretch of West Teaxs two-lane for eight years.

If you want to see it, you better hurry up!

Texas lawmakers and the media are now claiming the installation is little more than an illegal roadside ad. The Texas Department of Transportation (TXDOT) has issued an order to remove the structure, calling it a billboard that does not fit permitted specifications.

Designed by Artists Michael Elmgreen and Ingar Dragset to resemble a Prada storefront, with the intention of it slowly disintegrating in the harsh West Texas climate, the small structure sits on private land in Valentine, Texas. This small tourist attraction has definitely drawn the attention many, and certainly brought visitors to the remote area, perhaps even helping to spawn the growing Marfa, Texas Art Scene. 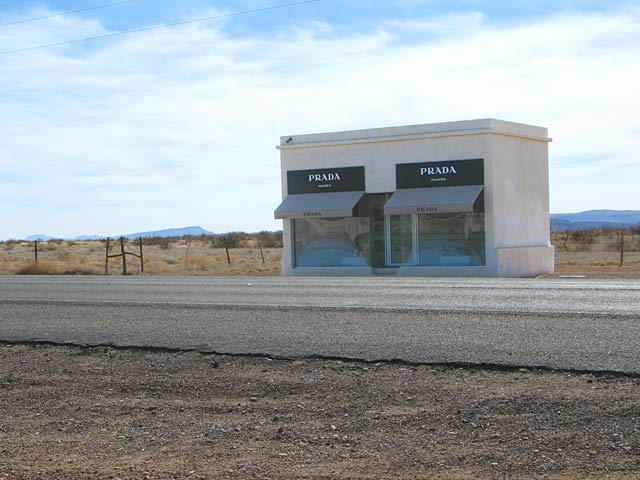 While she did not commission the project herself, Miuccia Prada approved the installation prior to its construction in 2005. Celebrity visits have resulted in a photo shoot of Beyonce at Prada Marfa, a write-up about Marfa in GQ magazine, and worldwide attention upon this stretch of highway often referred to as a godforsaken part of Texas—otherwise known only for its mysterious lights phenomena.

And that might be exactly why the “store” may soon be shut down. Locals have complained about the roadside art project, and apparently don’t take kindly to big brands putting up “billboards” along their back roads. This isn’t the first time a major brand has been chased out of town. A Marfa, Texas Playboy art project was the first to come under fire by the TXDOT. It appears that Prada Marfa will follow suit soon.

What do you think? Ads or Art? 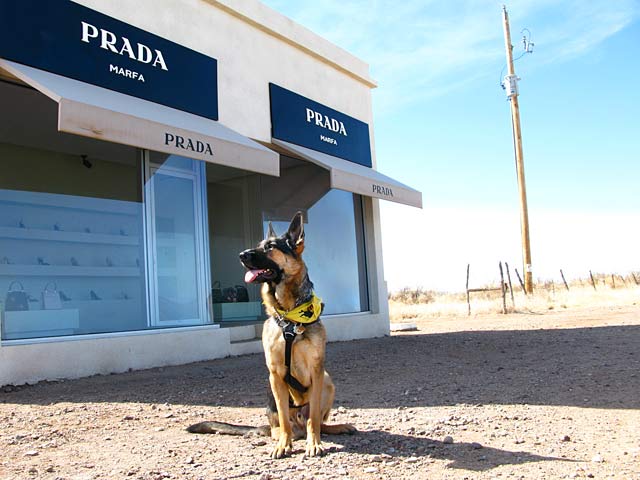 1 thought on “The Texan Wears Prada, Not For Long”