If there’s one person I know who defies every stereotype about aging, it’s Ted Simon. 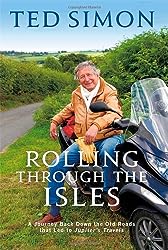 Over forty years after his first epic motorcycling voyage was chronicled in “Jupiters Travels: Four Years Around the World on a Triumph,” this octogenarian is still vagabonding around the world and creating page-turning books like “Rolling Through the Isles; a Journey Back Down the Roads that Led to Jupiter.”

Like Jupiter’s Travels, Rolling isn’t necessarily a book about motorcycling – that’s apparent right from the get-go when Ted reveals that his voyage through places in Great Britain that shaped his life will be on a scooter; a MP3, which is a half-scooter, half motorcycle with two wheels in front and one in back.

“I had in my mind’s eye an enticing, if rather quaint, picture of myself as an elegant gentleman of a certain age, probably in kid gloves and a silk scarf, rolling up to a rustic coaching inn where loquacious locals lounging around with foaming pints would be intrigued by this phenomenon – “Why, sir, may we enquire what brings a fine gentleman like yourself to these parts, and on such an unusual conveyance?”

My high hopes for an epic motorcycling jaunt were instantly deflated. I wondered; could Ted, the hardcore motorcycle adventure journalist who’s twice circled the globe on real bikes, be going soft in his old age?

Don’t Expect and You Won’t be Disappointed

As many experienced travelers advise novice vagabonds, hitting the road without a lot of expectations is one of the keys to a successful journey. But as Ted prepares for his departure, we realize that even this seasoned nomad is susceptible to high expectations about travel, only to have his ideas scrapped when unexpected events like a head injury occur. Still, in true Ted style, he goes with the flow and keeps his eye on the goal; a long, leisurely journey into the winding roads of his British youth.

Much of the book is a recollection of the people and places who shaped Ted’s destiny, but it’s also a fascinating firsthand account of British life during World War II. Ted recaptures what it was like to be a child during this terribly impoverished era, and in a surprising turn of events, discovers that the idyllic boarding school where his mother sent him to live was actually a refuge for Jewish children who escaped from Nazi Germany.

While Ted cruises around the British countryside, the rapid pace on the highways and in the cities around him nearly obliterate any notions of the meandering journey he and the reader hoped for. We begin to believe that his expedition will culminate in the disappointed grumblings of an old curmudgeon – until technology leads Ted to an amazing discovery:

“I found that I could set my TomTom to a maximum of 30 m.p.h., and the result was breathtaking. It was like stepping back into a different world where everything was small-scale and local, where the important thing in life was not how to get to London or even the nearest big town: what really mattered was the shortest way for your horses to go from the hayfield to your barn.”

Once his TomTom is set back, the adventure unfolds into a though-provoking commentary on the mind-boggling expansion of cities, transportation and technology. Ted reveals both the benefits and drawbacks of an unhurried life that he once knew – an existence that most of us have only read about but yearn to rediscover in some way. With Ted as our guide, we learn how he tossed aside the consumer lifestyle trap to create a richly satisfying life as a global traveler.

“In a way I see the fast food trap as a metaphor for our life today. You can load the salt, sugar and fat onto everything. Films? Think special effects, mayhem and superstars. Politics? Think non-stop news cycles, Murdoch and fear-mongering. Sport? Think grossly overblown multi-billion-pound circuses like Formula One and the Olympics. Lifestyles? Think second mortgages, everything on tick, drugs and booze ad nauseam (literally, at two a.m. on weekends). The excess is both wretched and mediocre.

We know none of it’s very good but we’re too lazy to work for anything better. For many who grow up without any particular aim in life (an all too-common condition today), the only thing that seems worth doing is to make money. Those who can prey on those who can’t, but none of it is very satisfying. I am fairly sure that what really lies behind the latest rash of riots, which are happening as I write these words in 2011, is not criminality, or resentment, or original sin: it’s boredom and a dim sense of self-loathing.”

Rolling Through the Isles is part autobiography, part history book and part guide book for breaking away from the salt, fat and sugar force-fed to the masses. After eighty-two years on the planet, Ted has a wealth of knowledge to share about living a fulfilled life. And, I was happy to learn that he most certainly hasn’t gone soft on us either, despite the mechanized tricycle chosen for this journey.

In his blog, Ted once said:

Why was I able, in my forties, to take four years off to ride around the world? Because I had found a way to lead a life that cost very little to maintain . . . In one way or another I’ve been able to maintain that way of living ever since, for more than thirty years.

Read Ted’s book today. Then, find an out-of-the-box way to make enough money to pay your bills without destroying your soul. Blow up the boob tube. Set your TomTom back to 30 mph and never stop being curious about the world.