Spending time in the Big Bend region is like journeying to another place and time in our nation’s history. With few places to stock up on groceries, minimal cell coverage throughout and spotty FM radio reception, you must be prepared to sacrifice conveniences, but doing so is a small price to pay in exchange for one of the best travel experiences in the U.S. 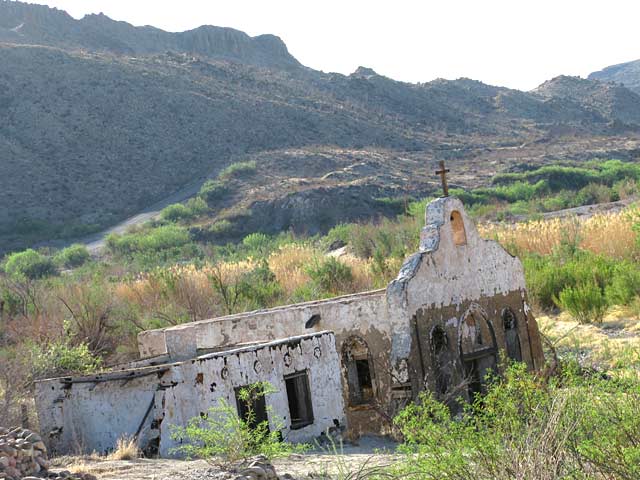 The Big Bend shows few indicators of modern America. Take a second to scan the jagged Tierra Incognita and you’ll see almost the exact same sights that Spanish conquistador Cabeza de Vaca saw when he crossed the Rio Grande hundreds of years ago. 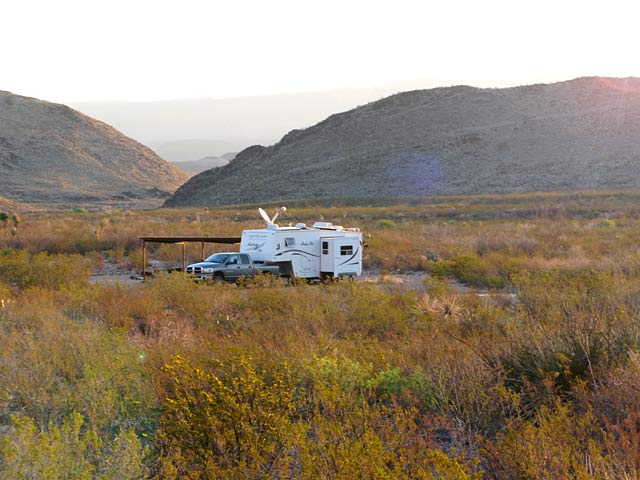 This no man’s land, where borders have never meant much and little has changed. Here, a landscape of living history is waiting for you to explore.

Hardly any places in North America have remained exactly as they were before the birth of our country.

And for the hardy souls who live here, that’s exactly how they like it.

Local landmarks recall the names of the Big Bend’s earliest ranching families, but one clan is known far beyond the county borders, thanks to a heroic, savvy and courageous rancher named Hallie Stillwell, whom you’ll get to know if you take time to visit Stillwell Store and RV Park, located near the east entrance to Big Bend Park.

Hallie Stillwell was a pioneer cowgirl in the early 1900s who became an entrepreneur out of necessity when her rancher husband Roy died in 1948 at the beginning of the worst U.S. drought in history. 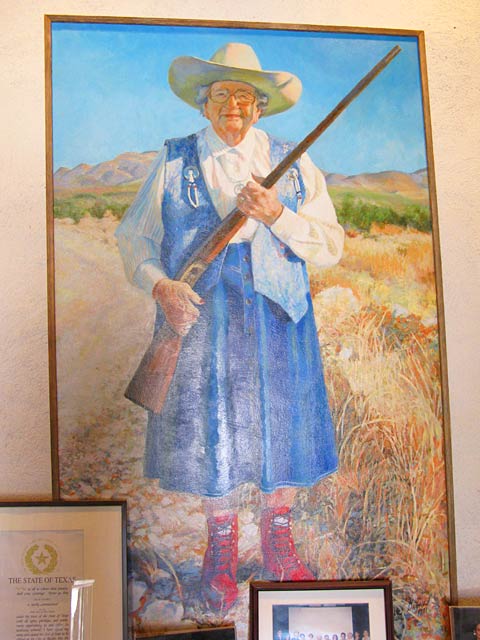 As word spread about her heroic efforts to keep her family homestead alive, Hallie’s name became synonymous with determination and grit. She was so well known by everyone from governors to vaqueros that during her lifetime she was twice honored as “the Yellow Rose of Texas,” an honor that few, if any others have received.

Hallie was born fearless, but this mother of three never had a tougher fight than when she fought to save the 22,000 acre ranch that she loved. She did everything from serving as justice of the peace to writing a newspaper column to rancher, and no job was too tough or too “unladylike” for her. 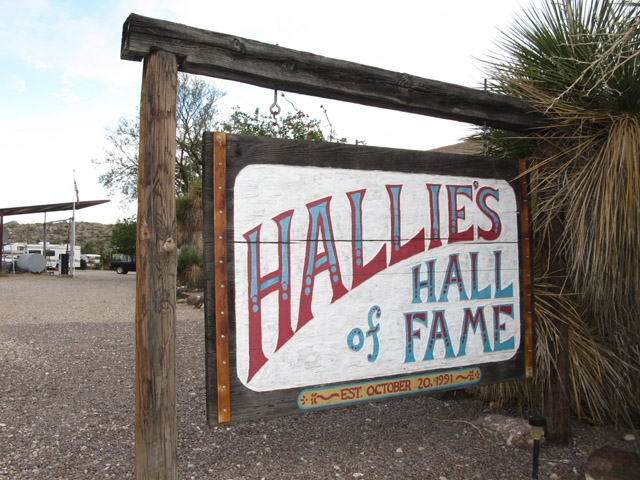 Later in life, this sharp-shooting woman’s reputation as a tough cowpunch grew to astronomical proportions.

Hallie became well known when she began speaking at Texas events to share tales of her adventures during the most violent episodes of Pancho Villa’s reign of terror along the borderlands. She also loved sharing stories about her days as a rancher alongside her husband, and the many decades she managed to keep the ranch going after his death.

From the moment she married until her death at age 99 in 1995, she made enduring contributions to Big Bend history that you can immerse yourself in by visiting the Hallie Stillwell Hall of Fame museum located at Stillwell Store & RV Park. 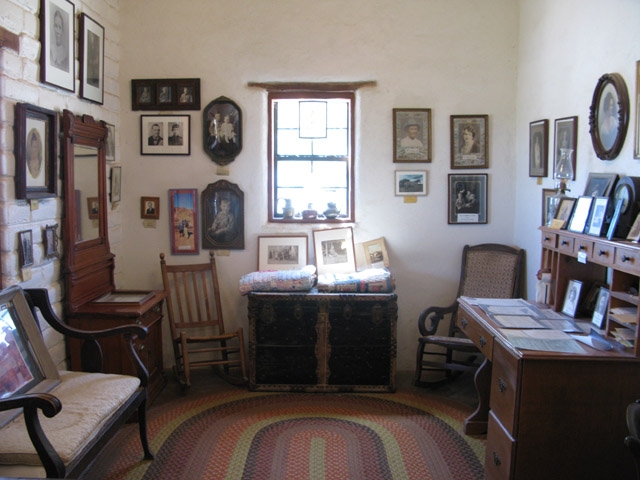 The museum building is on the park grounds, and part of it is an exact replica of the adobe ranch kitchen from Hallie’s old ranch house.

In a 1995 interview, Hallie tell us “If you love this country, it’ll love you. If you hate it, you just better move on. Don’t even stay.”

This winter we stayed, and were so glad we did. 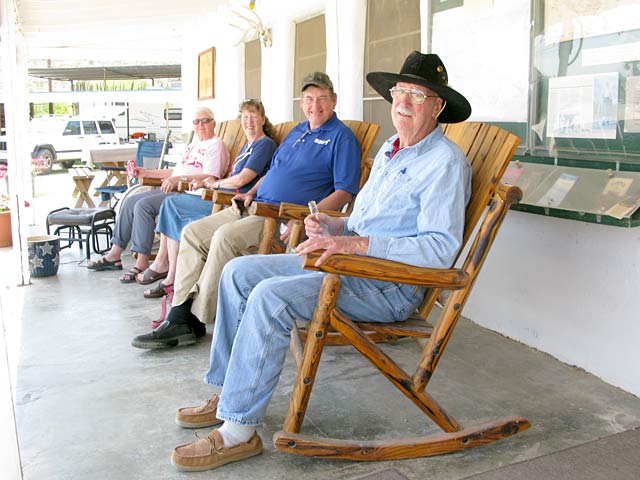 Stillwell Store and RV Park has always been in the shadow of Big Bend National Park and snazzier RV parks like the Big Bend Resort. The park is rarely full, because many visitors speed past Stillwell’s billboard on Highway 287 without a second glance.

But for those folks who are compelled to make that turn to Stillwell, they’ll be rewarded with the best experience that the Big Bend region has to offer. 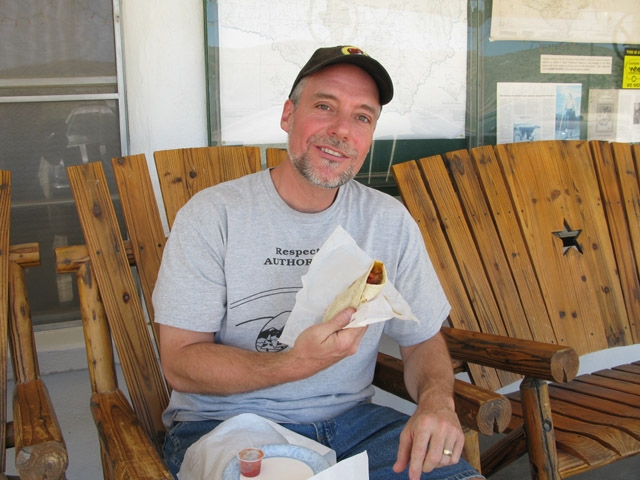 Stillwell is more than a place to stay. It’s an invitation to slow down and enjoy things like Nan’s Burritos.

It’s where locals and visitors alike sit on the front porch throughout the day while sipping cool beverages and spinning tall tales about the land and its remarkable, tough and quirky residents.

This place is the antithesis of way out Terlingua, the nearest locale to the west that resembles civilization. The two places couldn’t be more opposite. 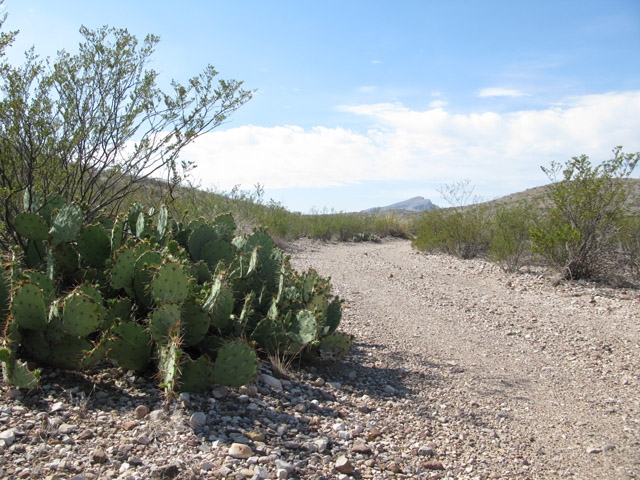 A local described the Stillwell vibe like this: if a group of characters is hanging out on a front porch in Terlingua and the sheriff pulls up, everyone scatters.

But when the sheriff arrives at Stillwell Store, people invite him to pull up a chair.

Stillwell is a destination for travelers seeking authenticity in this man made world.

Skip the Park, Visit Stillwell Instead 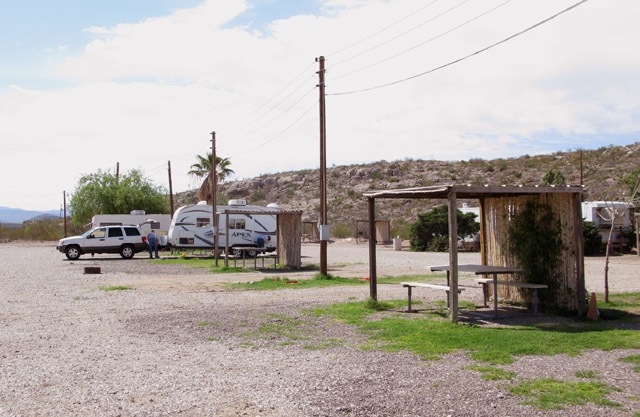 Forget staying in Big Bend National Park – Stillwell is just 10 minutes from the park entrance and its landscape rivals those found inside park borders.

Plus, Stillwell is extremely dog-friendly (which the park isn’t), and it has basic amenities like wifi, laundry and full-hookups.

But that’s not why Stillwell is a great place to visit. The real fun is all about the characters who meet on the porch every afternoon. 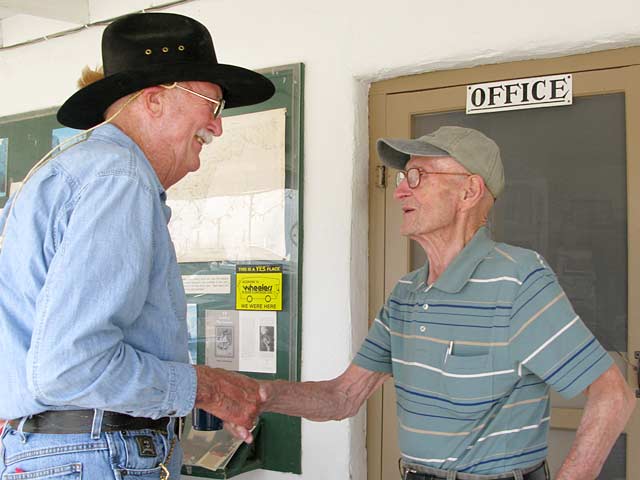 From the repeat visitors like the 82-year old mayor of Leonard, Texas who stays here twice yearly and helps give tours of the museum, to the local biker who mingles with guests, there’s no end to the fun people you’ll meet every night of the week.

One afternoon we learned more about this area after talking to local rancher and world-famous flintknapper artist Kinley Coyan, than from any history book.

No matter who you encounter, by the end of the day, you’ll have met and become friends with nearly everyone here. As the saying goes, like attracts like, and it takes a certain breed of individual to kick back and appreciate the Stillwell magic that begins on the front porch, and continues into the evening around the group campfire. 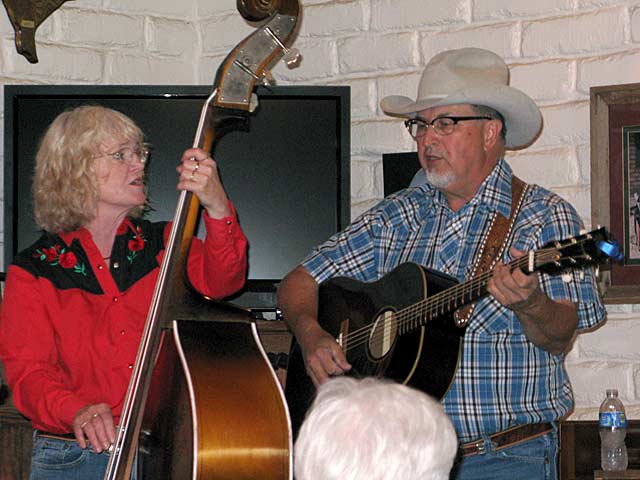 “This is the antithesis of the KOA,” says Eldon Whitford, who’s been coming here for eight consecutive winters.

“This is real life here. At other RV parks you stay isolated in your own camper — it’s canned. Here (at Stillwell) it’s a community, this is real.”

Eldon is a volunteer Stillwell workamper and world-renowned expert on Gibson guitars. Each year he drives his RV all the way from Michigan, and along with his band mate and lovely wife Ann, plays western music as The Whitfords, six nights a week for guests. There’s even a lively Sunday gospel music session.

Ann calls Stillwell “a camp experience for adults. We feel really lucky to be a part of it.”

Ann and Eldon are part of a large group of mostly retired people who pay rent for a few months each winter then do what needs to be done to keep the park running. From cooking for large events, to troubleshooting electrical outages, volunteers are the heart of the Stillwell community. 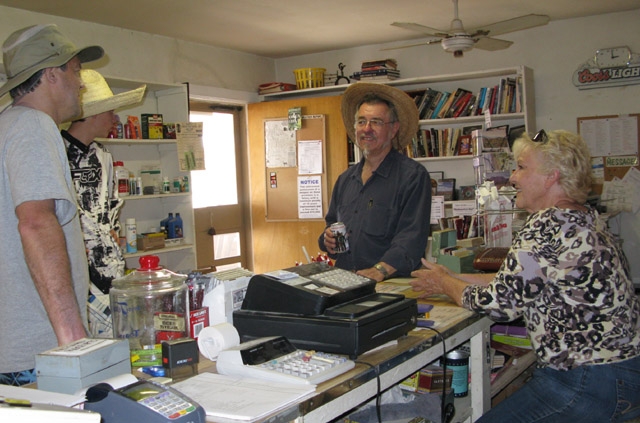 A Stillwell family member has always managed the park, and today that responsibility is being handled with grace and grit by Kay Pizzini, Hallie’s granddaughter.

Kay is one of several Stillwell women who have always been the driving force behind keeping the family businesses alive. She recently took over the reigns for the store, ranch and park operations from her sister Nan and now Kay has her sights set on park improvements like adding more lodging facilities for non-RVers.

Kay explains that Stillwell’s family atmosphere began when Hallie ran the park during the 1960s and ’70s. Later, Hallie would would hang out on the porch and chat with guests while Kay’s mom Dadie ran the business. 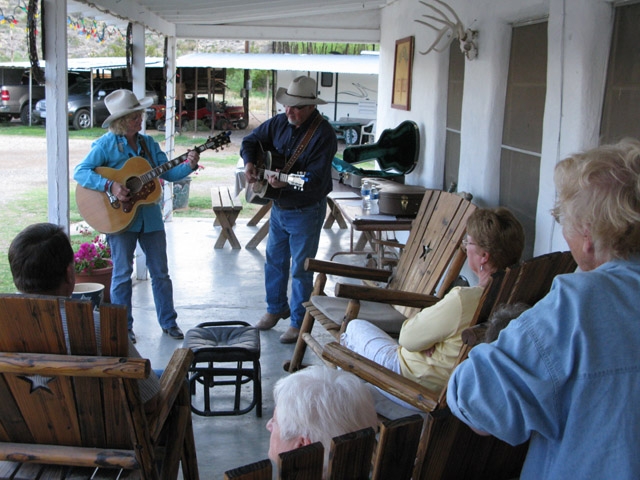 Today the volunteers like Ann and Eldon are building on the family experience, by generously giving so much of their time to help keep Stillwell alive.

While Kay single-handedly oversees the business details, she says that she couldn’t run the park on her own without the help of the regular flow of volunteers, some who help for just a day or two and others who stay all winter.

“When the volunteers come. I just let them take over,” she says. “I feel really lucky to have all these people here. If it wasn’t for y’all, I wouldn’t even try it” she says to Ann.

With a grandmother like Hallie Stillwell, there’s no doubt that Kay will continue to keep the Stillwell magic alive. 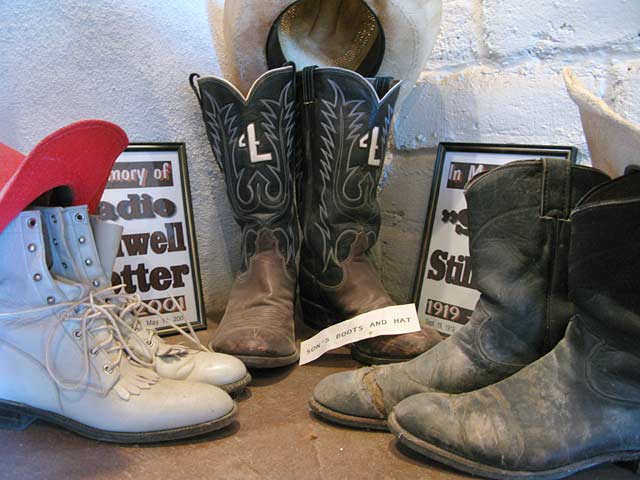 If you’re seeking a break from the predictability of typical RV parks, make it a point to visit Stillwell Store and RV Park during your next trip to the Big Bend.

Stillwell is open all year so if you’re a desert rat and love the heat, you’ll have the place to yourself during summer.

But if you’re looking for a change in your winter snowbird routine and want an inexpensive place to stay with like-minded, offbeat souls, you will love the “Stillwellians” who call this place home.

“In 1916, Hallie Crawford went to teach school in Presidio, just across the Rio Grande from Ojinaga, Mexico, which had been recently captured by Pancho Villa.

Hallie’s father, considering this a dangerous place for a young woman of nineteen to live alone, told her he thought she was going on a wild goose chase. “Then I’ll gather my geese,” she told him, with determination and independence.

Hallie’s story, told in a personal and engaging way, is fascinating reading for anyone interested in the history of pioneering ranching in Texas.”