If your RVing itinerary gets delayed because you’re waiting for a part to arrive, few places are better than Alpine, Texas. Well, in March, anyhow. And not during spring break. We’ll get to that in a moment, but meanwhile, the whole reason we moseyed on out to these rugged hinterlands is because of the 26th Annual Texas Cowboy Poetry Gathering, which happened during the last weekend in February. 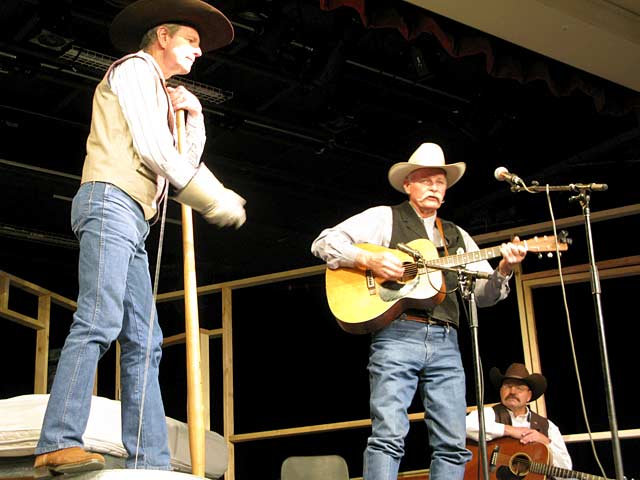 Three years ago we experienced the Festival for the first time and have been charmed ever since.

The Gathering is a two-day event packed with North America’s most talented and authentic working cowboy poets and folk musicians like Doris Daley, Gail Steiger and award-winning yodelers like Jill Jones.

While Nevada’s National Cowboy Poetry Gathering is much larger in scale, we love this one because of it’s smaller size and more locally-focused, down-home feel. Many of the poets and musicians were born and raised in West Texas and spin fascinating tales and music about this region, it’s people and history. Best of all, it’s free! Donations are gladly appreciated of course, and the annual Trappings of Texas art auction is also one way the event is paid for.

Cowgirl Poets Round Up

As a wanna-be cowgirl, I was happy to see that his year there seemed to be more cowgirl poets than ever. I filmed a lot of video but they won’t make an appearance until my personal videographer (Jim) is caught up with his backlog of movies. Meanwhile, I wanted to share some of my favorite gathering performers: 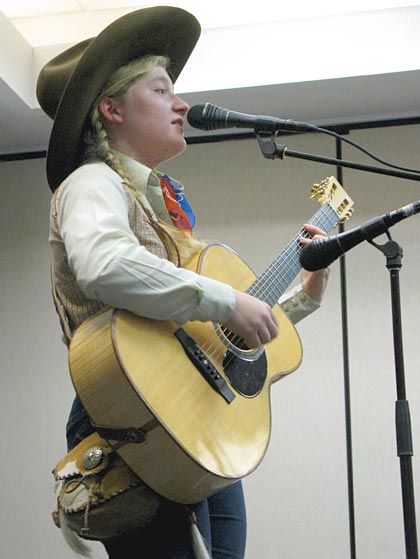 As the youngest performer at the event, this 18-year old spitfire is destined to reach a level of stardom that goes far beyond the cowboy poetry universe. She’s a native of McKinney, Texas who stole the show the entire weekend as she belted out her award-winning compositions and classic Western tunes like “Thank Heavens for Dale Evans” and an all-Texas version of Johnny Cash’s “I’ve Been Everywhere, Man.”

It was her first year at the event, and her contagious energy filled the room during every one of her standing-room only performances. We were so fortunate to catch her set in this 200-person room venue, because I’m sure she’ll be packing stadiums next! Here’s a glimpse:

This native Texan who now rides the range in Arizona appeared as part of the gathering’s “Women of the West” performance. Amy is a writer and author of “Rightful Place,” essays which explore her belief

“that life is a miracle and it is demonstrated all around us in the natural world where things grow up out of the ground, birds build nests, bats fly at night, cows turn our national forests into healthy beef, beavers build dams, and flowers bloom in deep canyons where no one sees.”

Her spoken word performance about her years as a ranch wife and mother was incredibly moving and inspiring. She’s only published one book so far, but her experiences back home on the range can fill volumes. 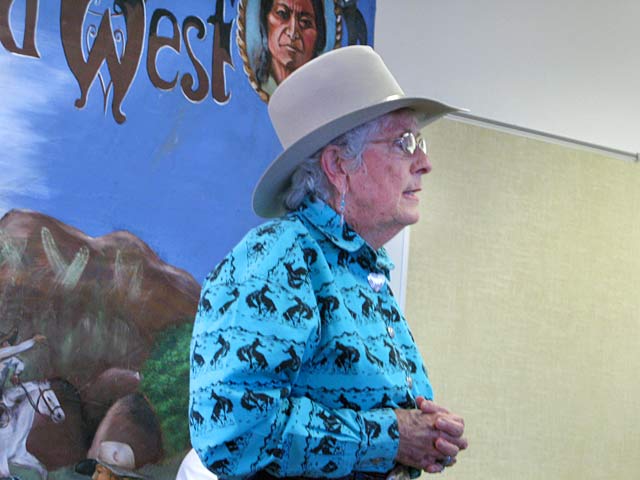 As my favorite performer of the Gathering, Carol’s narratives of living the cowgirl’s lifestyle with her husband of nearly 50 years were the most memorable of the weekend.

From Oregon to Wyoming to Arizona, she and her husband Dan lived close to the land as ranchers, which resulted in volumes of richly spun stories and poems about their home on the range, her life as a cowgirl and the natural beauty that surrounded them wherever they ranched. Her intimate acquaintance with the job of ranch wife through so many decades of changing female roles in this country gave younger gals like me a glimpse of how much things have changed, as well as how much they haven’t.

This section from one of her poems, summarizes how she feels about the incredible life she’s led so far:

“There’s a whole lot of satisfaction in the way a cowboy lives, not the hard work and the danger, but the freedom that it gives.

When his long days’ over, and his pony’s turned out to graze, he’s filled with satisfaction from the job, not what it pays. And he’ll walk through the door of his old bunk house, with his dog just one step behind, content with his life as a cowboy, and the peace it brings to his mind.”

Carol’s husband passed away recently and although she originally thought that she would give up performing, there’s a whole new audience of young’uns like us who are so glad that she didn’t! She told me that her books are now out of print but maybe if we email her enough she will consider reprinting them?

Giddy Up to the Gatherin’

Yes, it was my idea to attend the Gathering again. And you have to hand it to Jim, who after two, eight-hour days of non-stop poetry and Western music performances, sat there alongside me without even a grumble or a complaint. He was bribed, however, with a fantastic Texas BBQ dinner that he got when it was over, at Alpine’s Cowboy Grill.

If you’re prone to wanderin’ ways and the solitude of vast open spaces as we are, you owe it to yourself to check out the Gathering. If you do, be aware that local RV parks get booked up to a year in advance, so reserve a spot at the Lost Alaskan or BC Ranch early. It takes a pretty special event for us to make a reservation so far ahead, but once again we’re glad we did.

Little did we know we would end up staying in this area for almost a month, but that’s a tale for next time!