When you have the ability to create a new, temporary home somewhere, why not dive into a book about the area? Learning a little about your location will always reveal surprising, colorful stories, even in the most seemingly boring places. You’ll end up with a stronger connection to your surroundings than a two second Kodak moment.

Desert Solitaire: A Season in the Wilderness, by Edward Abbey

Whoever left this at the Slabs Library had no idea how much it would rock my world. Thank you!

Amazon.com Review: Edward Abbey’s Desert Solitaire, the noted author’s most enduring nonfiction work, is an account of Abbey’s seasons as a ranger at Arches National Park outside Moab, Utah.

Abbey reflects on the nature of the Colorado Plateau desert, on the condition of our remaining wilderness, and on the future of a civilization that cannot reconcile itself to living in the natural world. He also recounts adventures with scorpions and snakes, obstinate tourists and entrenched bureaucrats, and, most powerful of all, with his own mortality. Abbey’s account of getting stranded in a rock pool down a side branch of the Grand Canyon is at once hilarious and terrifying.

Road trippers, wanderers and hobos have much in common with Abbey, one of the America’s first radical environmentalists. Anyone who breaks from convention and searches for a different path in life will find validation in their “odd” life choices when reading his work.

“My God! I’m thinking, what incredible shit we put up with most of our lives — the domestic routine (same old wife every night), the stupid and useless and degrading jobs. . . the foul, diseased and hideious cities and towns we live in, the constant petty tyranny of automatic washers and automobiles and TV machines and telephones –! ah Christ! I’m thinking, at the same time that I’m waving goodby to that hollering idiot on the shore, what intolerable garbage and what utterly useless crap we bury ourselves in day by day, while patiently enduring at the same time the creeping strangulation of the clean white collar and the rich but modest four-in-hand garrote!).

. . . That‘s what the first taste of the wild does to a man, after having been too long penned up in the city. No wonder the Authorities are so anxious to smother the wilderness under asphalt and reservoirs.“ 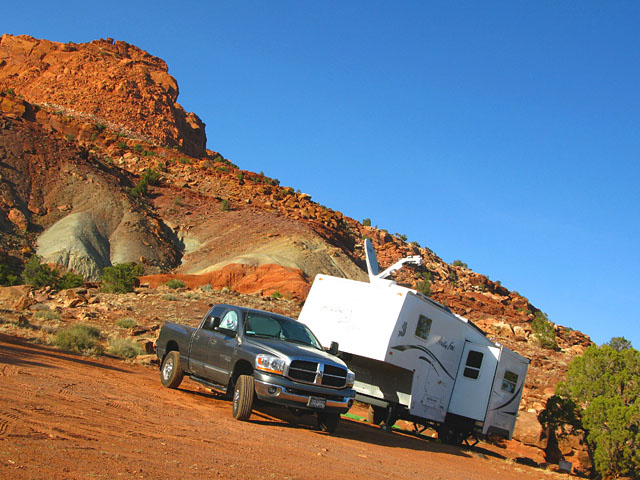 This week Jim and I are in Moab, camped around dozens of off-roader jeepers, bikers and dune buggiers who tear up the landscape while leaving swirling contrails of testosterone behind.

As I watch them whiz by on wheels, I can’t help but think of one of my favorite passages:

“What can I tell them? Sealed in their metallic shells like molluscs on wheels, how can I pry the people free? The auto as tin can, the park ranger as opener. Look here, I want to say, for godsake folks get out of them there machines, take off those fucking sunglasses and unpeel both eyeballs, look around; throw away those goddamned idiotic cameras! For chrissake folks what is this life if full of care we have no time to stand and stare? eh?

. . . Yes sir, yes madam, I entreat you, get out of those motorized wheelchairs, get off your foam rubber backsides, stand up straight like men! like women! like human beings! and walk — walk — WALK upon our sweet and blessed land!”

Under the Banner of Heaven, a Story of Violent Faith, by Jon Krakauer

Jim and I love Utah’s landscapes, but we’ve always been slightly freaked out by the Mormon culture that dominates every town we’ve been through. Ever since we rode here on our motorcycles a million years ago and a grocery store clerk snidely called long-haired Jim “Ma’am”, we’ve been more than a little critical of the creepy, stepford-like attitudes we’ve encountered among a lot (but not all) people.

Krakauer’s book sheds loads of light on Mormonism’s growth, their dominance of Utah’s politics and people and how many tiny sects have spun off and created even freakier fundamentalist movements.

From Publishers Weekly: Using as a focal point the chilling story of offshoot Mormon fundamentalist brothers Dan and Ron Lafferty, who in 1984 brutally butchered their sister-in-law and 15-month-old niece in the name of a divine revelation, Krakauer explores what he sees as the nature of radical Mormon sects with Svengali-like leaders.

Using mostly secondary historical texts and some contemporary primary sources, Krakauer compellingly details the history of the Mormon church from its early 19th-century creation by Joseph Smith (whom Krakauer describes as a convicted con man) to its violent journey from upstate New York to the Midwest and finally Utah, where, after the 1890 renunciation of the church’s holy doctrine sanctioning multiple marriages, it transformed itself into one of the world’s fastest-growing religions. 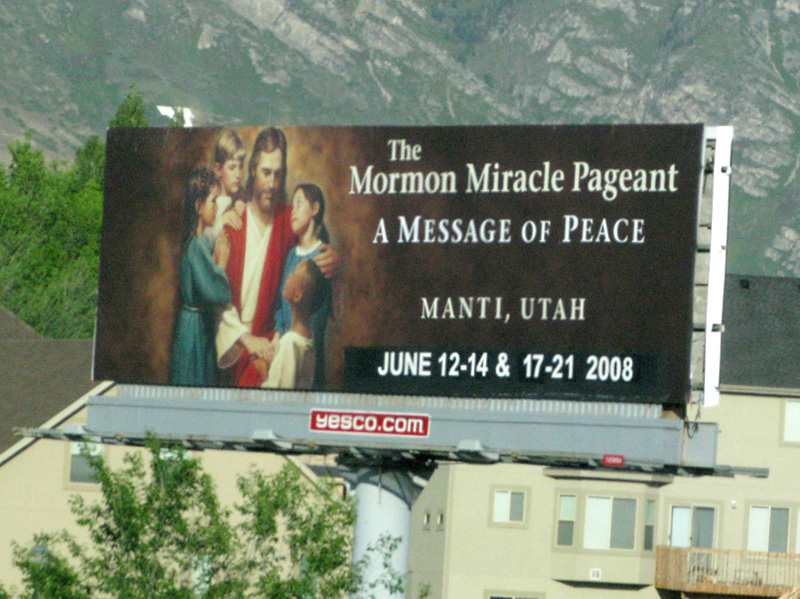 My take is that essentially, there’s no difference between a charismatic religious zealot like Mormon founder Joseph Smith, and other self-proclaimed prophets who mass media portrays as unstable nutbags with criminal tendencies (remember David Koresh?). The only thing separating them was timing. Mormonism grew as fast as it did because there wasn’t much to compete with it back in the 1800s. However, I’m still not sure how that explains the numbers of modern followers it continues to attract.

“Whatever we cannot easily understand we call God; this saves much wear and tear on the brain tissues.”

3 thoughts on “Local Flavor Learning: More than a Kodak Moment”