My dad once told me a similar joke where an immigrant gave up on learning the English language after reading that headline. But yet again, I digress. 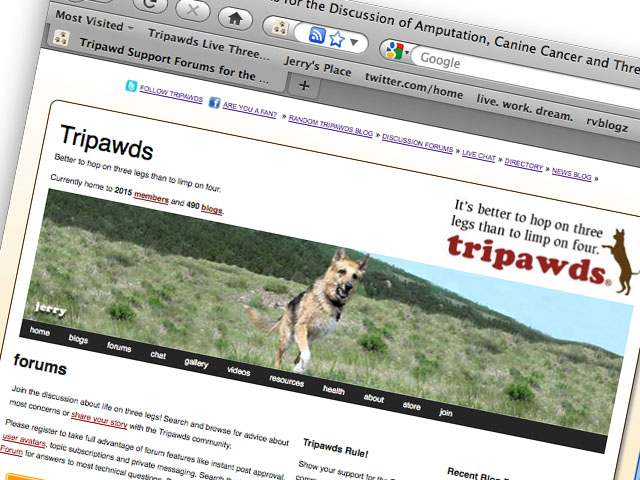 Though I have said it before, whenever I go AWOL around here you can rest assured it has something to do with three legged dogs. This time was a big deal.

I recently completed the long overdue Tripawds site makeover with a complete overhaul of the site’s theme and active plugin structure. Anyone interested in the easiest way to make random header images or how to integrate multi-site stats into a site-wide header might be interested in the bit I wrote about how to customize the WPMU-Nelo custom homepage CMS WordPress theme. 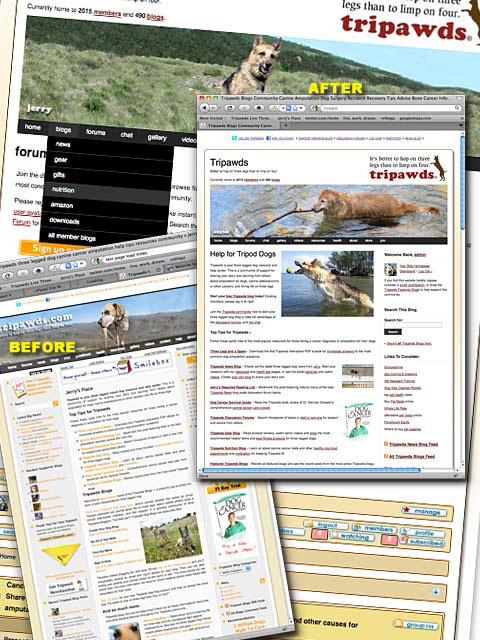 Suffice it to say, however, that this undertaking was a crash course in php and css. And so far, it has paid off. Speaking figuratively, not literally. My prime directive for overhauling the Tripawds site was to improve performance in the discussion forums.

We started Tripawds using Mandigo, the same theme behind this blog and the RVblogz community. It has served us well. Mandigo is massively configurable, with lots of java and many files. Over the past few years, Jerry’s blog infrastructure had become bloated.

Too many hacks, scripts and widgets were bogging down the site.

Seriously, there’s no way I alone could make the Tripawds Blogs community what it has become without my WPMUdev premium subscription for the best WordPress themes plugins and support. That’s how during the recent makeover I easily implemented robust new features like a global site search and searchable directories for blogs and members.

It’s also where I got the lean and mean WPMU-Nelo. Hacking this slick WordPress theme to bits was relatively easy, even for me due to it’s code simplicity and parent/child theme structure.

Did someone say digress? We’re in Quartzite now with the Nü Crew, and I haven’t even written about Walla Walla. As much as I hate reading blogs that bemoan infrequent updates, we gots some catchin’ up to do!