As a vegetarian since 1989, I’ve never liked rodeos. 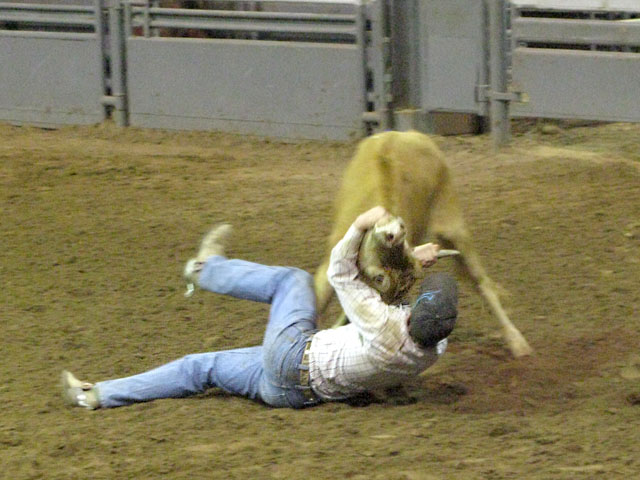 The whole idea of tying up an animal or wrestling him to the ground for sport always just seemed appalling to me.

I had never actually seen a rodeo in person before, but all these years took PETA on its word that  “rodeos are nothing more than manipulative displays of human domination over animals, thinly disguised as entertainment.”

Skill or Stupidity? You Decide.

When we were in Sweetwater, we happened to camp out at the fairgrounds the same weekend the West Texas Rodeo Association was in town. For just the price of our campsite, we had the option of checking out two days worth of events, free. Jim assumed I would want to leave, or at least organize a protest. But something compelled me to check it out. Being a cheapskate I figured I had nothing to lose if I found it as horrible as I always heard it would be. At least I would know PETA wasn’t exaggerating. After all these years, this veggie-burger eatin’, sprout growin’ hippie was going to judge rodeos for herself, I thought. 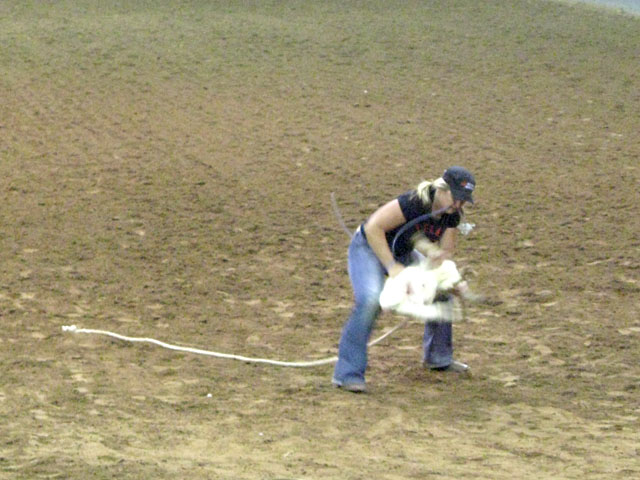 There was also goat tying, where brawny farm girls wearing feed caps ride into the stadium on a horse, dismount, then try to throw down and tie up a tethered goat as fast as possible.

Now, call me crazy, but I think it’s pretty unfair to prod a steer to run down a field, then twist his head nearly 360 degrees around until it falls down and call it sport. Or run after a terrified baby goat that’s screaming to get away, because he knows exactly what’s coming. 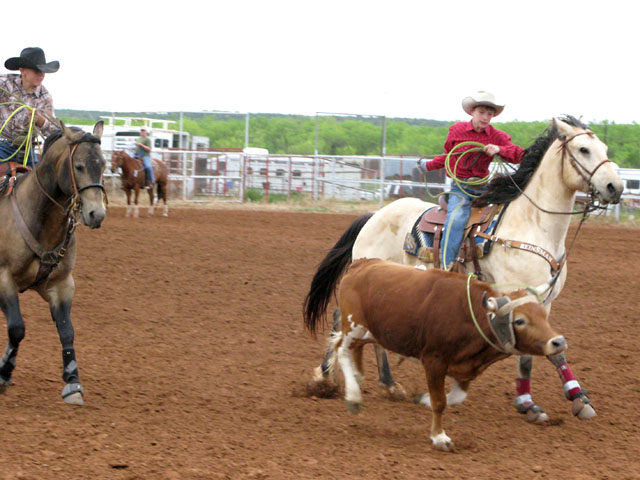 On the other hand, I also learned that other competitions like barrel racing or team roping were far more reflective of true skill. Team roping is when two contestants ride alongside a steer and one tries to throw a lasso around a horn while the other goes after the steer’s rear leg with a lasso. You try throwing a lasso at a moving target and see how easy it is. I know I can’t.

Clearly, in the bygone days of the Old West, many of these exercises were of a way of life for cowpokes on the ranch. These competitions weren’t just games, they were a necessary part of making a living. Seeing amateur rodeo gave me a tiny glimpse into that world, and for that reason I was glad I went.

I didn’t see any evidence of livestock mistreatment, but apparently PETA has lots of footage of rodeo animal abuse, and it’s rampant in big money competitions.

Still, so much of what I saw billed as “competition” was just mean, violent and unfair to the animals. I can only hope that in a world where many of us recognize the value in making cats and dogs part of our families, more people will adopt these same compassionate attitudes toward all creatures great and small, not just the ones we consider “pets.”

Judging by the few spectators at the Sweetwater rodeo, this might actually be happening. One can always hope, anyways.