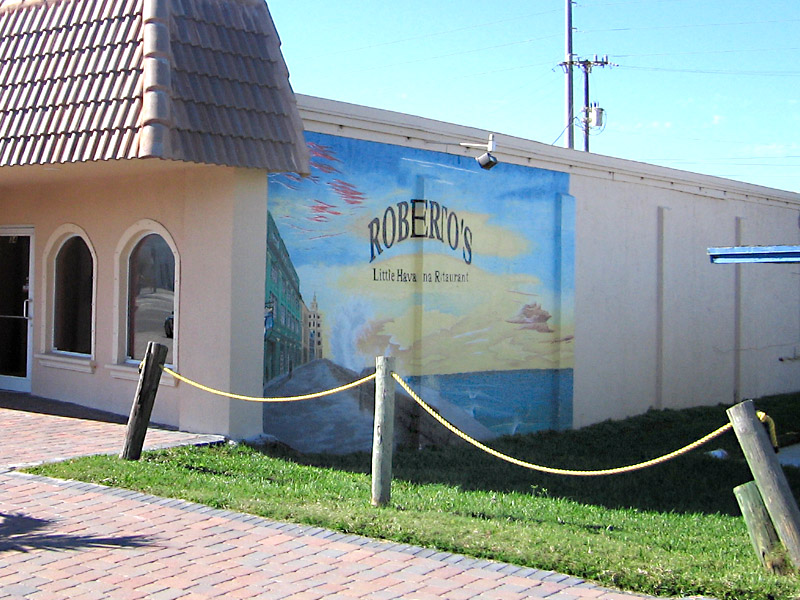 The reason? In all the miles we’ve traveled we hadn’t passed through any communities with enough – shall we we say, authentic color – to warrant a dinner out until we reached Florida.

But once we saw an authentic looking Taqueria, a Mercado selling dresses and phone cards, and our first Tecate billboard in over 29, 000 miles, we figured the food was worth a try. While it wasn’t bad, it was nothing to write home about either. But here I am doing just that.

Before we even reached the Mexican neighborhoods of the Treasure Coast, we were determined to try some Cuban food. After all, we were in Florida. But we were obviously still much closer to Virginia than Miami, at least when it came to breakfast. I mean seriously, do Cubans eat grits?

That’s what I got with the Ropas omelette I ordered at Roberto’s Little Havana Cuban Restaurant in Cocoa Beach, along with some wheat toast. Go figure. A couple different omelettes were the only items on the breakfast menu that even sounded authentic. I chose the Ropas which was a shredded beef similar in texture and taste to Machaca. Only without the kick. And this must have been the first omellette I have ever eaten sans cheese.

René opted for the Maduros, another omelette. This was a tasty mixture of plantains and stewed vegetables. Again just missing a little spice. So we asked for a side of salsa and got a steaming cup of chunky red sauce filled with peppers and onions. Darker, with more tomatoes than a salsa Ranchera, it was flavorful but didn’t quite have the zest it looked like it might.

Most of Roberto’s staff did look authentic and spoke with a distinctive Cuban accent. But not our waitress. And the coffee was sure good. But I would definitely recommend trying this place for lunch or dinner, unless you’re hungry for ham and grits.

So when we saw a busy Mexican restaurant right next to an authentic Mercado on our way home from working the Fort Pierce Farmer’s Market last Saturday, we just had to try it. Having been up since before dawn, we were hungry. And since we had to get back to put our remaining produce back in the cooler, we were just looking for a couple Taqueria style burrito bombs to take back to the farm. 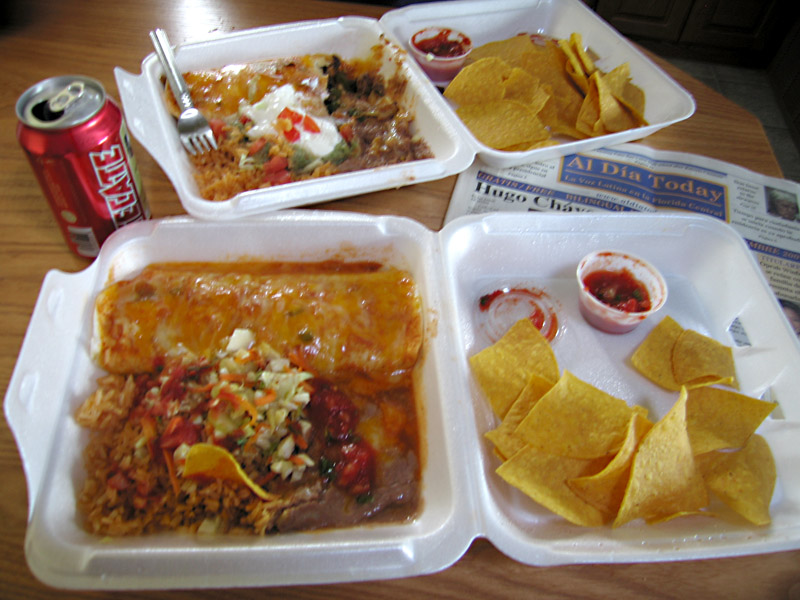 The “Ay Jalisco” menu also had the restaurant’s name spelled out as “I Jalisco” – no mierda. This should have been a sign of who they catered to – old white people with no tolerance for spicy food. I opted for the Burrito Asada and René got the vegetarian Burrito Feta. Hoping for two big burritos wrapped in foil, we got a bag with two large styrofoam containers. Oh well, we were hungry.

After putting up our produce we sat down and opened them up. Our burritos were big, but served dinner style – smothered in salsa Ranchera, surrounded by rice and beans. The beans weren’t bad, but nowhere near as good as Olga’s (René’s mom), and we could make better rice.

The steak bits in my burrito were tasty but minced too fine, as if customers had complained about having to chew too much. And while they went a bit overboard on the bell pepper, that was obviously the only pepper they cooked with. It screamed for Cholula, and I was happy oblige.

René referred to hers as “el Burrito Gringo” – the zucchini was prepared as a Mexican might, but it was bland and “lacked soul”. Neither of us were completely dissatisfied, but we were both a bit disappointed considering the place was run by real Mexicans.

We did however, finally get the Tecate we have been searching for since leaving Arizona. The store next door was clearly 100% authentic. And whatever the laborers gathered around a card table were eating sure smelled better than our Mexamerican meal. Perhaps if we were a bit more fluent, we could have gotten the inside scoop on where to get some tamales for Christmas. At the restaurant, they just looked at us funny when René asked if we could place an order for a dozen tamales. I just had to butt in, knowing we would end up with 12 dripping styrofoam boxes.

I for one, am going to miss the mayhem at Casa de Agredano this year. And there is only one thing I’m looking forward to in Texas. The food.