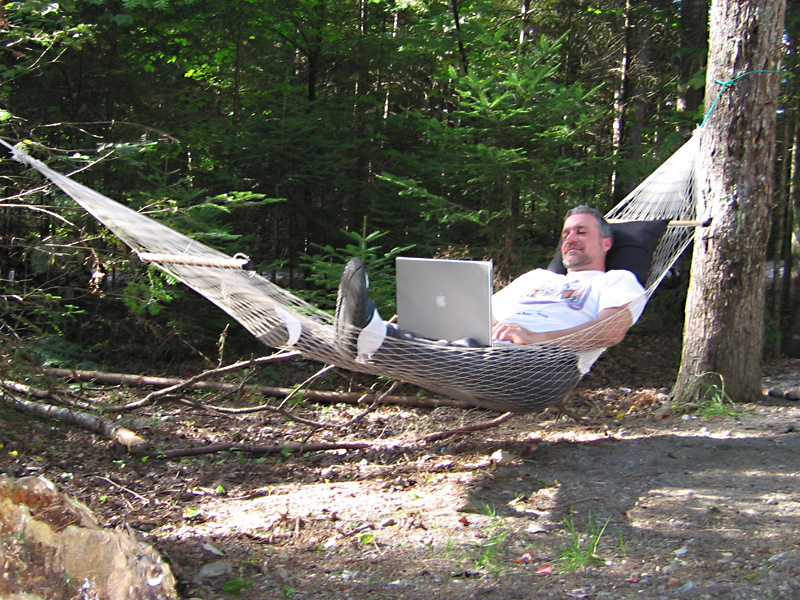 When we embarked on this trip, I often imagined kicking back in my hammock with my Powerbook and enjoying my new office. Well, the first couple times that I have actually strung up the thing I ended up not spending any time in it at all. If my hammock time wasn’t called on account of rain, there was either too much on my RV honey do list or simply too much of the outdoors to go enjoy.

I am now happy to say that my vision has finally come true. The view from my new office is well worth the wait. The only thing missing is our internet connection.

If you follow this blog and wonder why we haven’t posted anything or updated our map since we left New Hampshire, fear not. It is simply because of this: Maine has a lot of trees. We are almost as far East as we can get from Humboldt County CA where we started over three and a half months ago. But not since reaching New England have we traveled through such dense green forests. And while the trees aren’t nearly as tall, they are clearly as numerous. And very soon half of them will be bare. Until then, we are enjoying the views as they blaze from chartreuse and golden orange to bright fuscia and deep maroon. We have become what is known in these parts as Leaf Peepers.

Surrounded by forest at Lily Bay State Park we are unable to lock onto our satellite with our Datastorm F2 dish. With MotoSat 91 West sitting in geostationary orbit at approximately 22,000 miles somewhere over Texas, I have never seen our dish point so low on the horizon when searching for it. Nearly peaking on the signal through a small gap in the trees, the dish continued to search the sky just as we thought we were locked on. Oh well, time to go camping. And enjoy the outdoors we did.

After a morning run through the woods, our first attempt to spy on some Moose resulted only in the meeting of an adventurous couple camped out along a remote dirt road in search of the same. We hope to hook up with Kathy and Bob at Geddy’s when we get to Bar Harbor. It may have been too late in the day for moose watching, but the view of Mt. Katahdin was spectacular. That evening, we had our first campfire since visiting with Winston and friends at Lake Francis. Until now, it has just been too hot to even consider a building a fire. 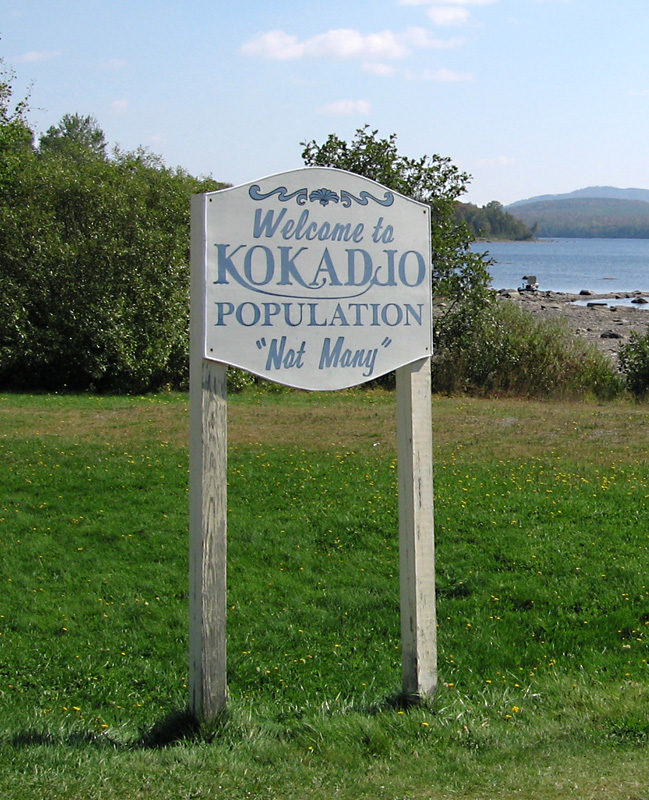 Last night I discovered that anglers travel from around the world to fish the Roach River just down the road in Kokadjo. So I spent the $13 for a 24-hour Maine state fishing license and struck out after trekking through dense trees more than fishing until it got dark. But this morning I rose early to give it a shot right at the dam to Roach Pond #1 where I had seen a few folks casting flies the day before. After trying various dry flies then switching to nymphs, I finally hooked the largest fish I have ever caught with my fly rod. About to give up, I tied a dry fly on to my sinking line and hooked a beautiful land-locked salmon at least 16” long. As it turns out though, I could’ve slept in a bit after all. As I was landing my lunker, a woman walked up to start fishing and said “Yep they start late in this pool, around 9:30.” Sure enough, she proceeded to catch and release her share.

On the way to catch my $13 fish, I also had my first moose encounter. Luckily, it wasn’t in front of the truck but off the side of road standing guard as her little calf – bigger than me – grazed the morning dew covered grass. Right around the bend, I slowed to let two coyotes run across the road as a large truck quickly got larger in my rearview mirror. Beware of the trucks in these parts, they ignore the speed limit no matter what it is, and they will gladly force you off the road.

4 thoughts on “Third Time’s a Charm”