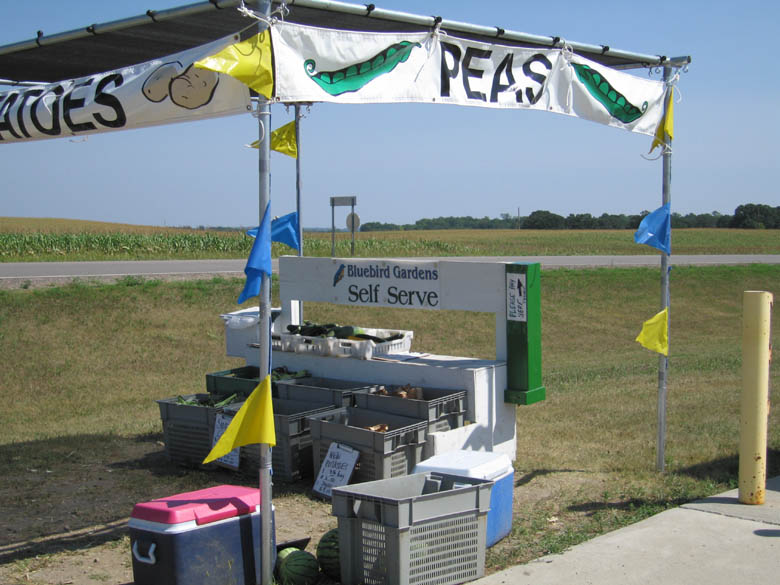 Yesterday in Grand Forks, ND, I found another health food store. They’re becoming less than a few hundred miles apart now, a good sign that we are getting closer to larger populations where healthy food & environmental consciousness matter. The stores we’ve encountered are reminiscent of what health food stores were like on the West Coast many years ago; small and hippie-ish, with a focus on supplements and little, if any groceries and produce. This one in Grand Forks did have some local produce, but no lettuce or greens.

I noticed a sign-in sheet for a local CSA Farm on the counter. The farm was about 50 miles from Grand Forks, and it turns out, is the nearest local vegetable farm for the area, but they only produce for CSA members. For anyone else who wants organic produce, they can take a gamble and go to the nearest supermarket, but chances are that the produce came from hundreds of miles away. Huh? No local produce in stores during summer? Barbara Kingsolver

I wanted to know how where the closest local organic produce came from in the wintertime, so I asked the clerk.

Dire. She said dire. I thought to myself, “what, are we in Russia?”

“Is anyone doing hydroponic lettuce or greens?” I asked.

“Nope, just tomatoes until October. We get squash and potatoes from local sources during winter, but everything else gets trucked in from places like California,” she said.

The sky fell in on me. No local lettuce in January? Not even from the same state? No truly fresh snap peas? A life without locally grown winter chard? What kind of life is that? I felt so naive, and just dumb, for taking fresh California produce for granted my entire life. As someone who’s always eaten salads for dinner about 3 or 4 times a week, it was inconceivable to me that anyone could live all winter long on old, wilty produce that got trucked in from so many states away.

The episode was fitting, because right now we are listening to the great new Barbara Kingsolver book, “Animal, Vegetable, Miracle: A Year of Food Life

” as we travel across the Midwest.

Hang on for the ride: With characteristic poetry and pluck, Barbara Kingsolver and her family sweep readers along on their journey away from the industrial-food pipeline to a rural life in which they vow to buy only food raised in their own neighborhood, grow it themselves, or learn to live without it. Their good-humored search yields surprising discoveries about turkey sex life and overly zealous zucchini plants, en route to a food culture that’s better for the neighborhood and also better on the table. Part memoir, part journalistic investigation, Animal, Vegetable, Miracle makes a passionate case for putting the kitchen back at the center of family life and diversified farms at the center of the American diet.

This is truly an incredible book, I highly recommend it.

The conversation with the clerk was a huge, earth shattering awakening for me. Upon leaving the store I proclaimed to Jim that living in the Midwest was out of the question. I couldn’t live on old produce, even for just one season a year.

“Thank god,” he said, “I was hoping you’d say that.” For him, the Midwest is just too hot in summer, too cold in winter, and too flat all the time. The lack of fresh wintertime produce sealed the deal for me. Onward we go to the East.

10 thoughts on “Living and Eating in a West Coast Bubble”