Fallen Window? Or is it a dropped window? Technically, it’s not a broken window. But I am having a hard time determining specifically what to call the fallen window repair job I did on our Dodge Ram 2500. Let me back up… 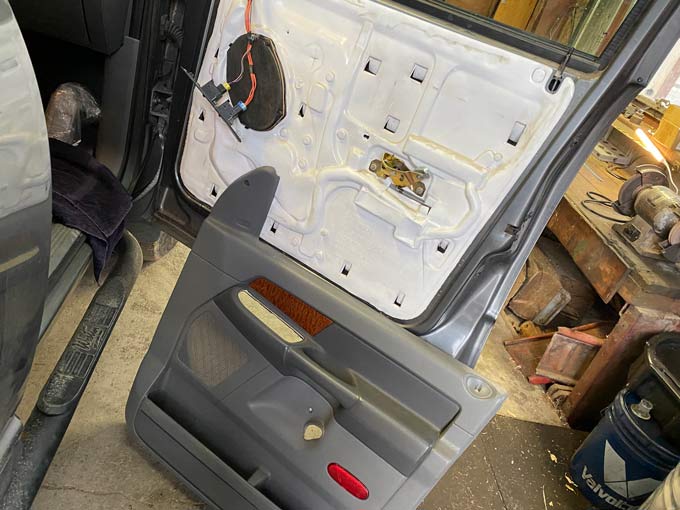 Of course, it started raining the night the passenger window fell down inside the door of our truck. It didn’t break. But clearly something inside did. Apparently this window dropped down into the door thing  is pretty common. The geek doesn’t want to call this a bug, it’s more a design flaw. But I’ll get to that. First I’ll explain what happened, and how to fix it.

Looks complicated, right? If you’re faced with a fallen window, don’t panic. You will likely only need a screwdriver. And you probably won’t even have to order any parts. We didn’t.

How To Roll Fallen Window Back Up?

We were lucky. When our Dodge Ram power window fell down, it didn’t break. The bottom of the window rests on a track. That track is raised and lowered by the window regulator with a scissor lift. None of these parts broke. The window had fallen off it’s track. We were able to roll up the dropped window temporarily. I gently squeezed the the top of the window from both sides and lifted while Rene used the power window switch.

Of course, the window dropped again the next time we tried to lower it. Fearing it might break, I pulled it into the shop the next day. Another reason we love workamping at Vickers Ranch is access the massive shop, and all the right tools for the right job. The only tool this job required was a Phillips screwdriver. I believe the door handle nut came out easier with a socket wrench and extension. The only thing we had to buy was some high strength epoxy. It’s for that design flaw I’ll get to in a bit.

First, remove the door handle. Lift the lever out to access the screw holding it in place. Next, pry out the power window/lock switch. Disconnect the switch connector from the wiring harness. Remove all screws attaching the door panel. TIP: Once the door panel is loose you should be able to pass the switch assembly through its opening without removing the wiring. It will be handy to move the window up and down while working on the repair. 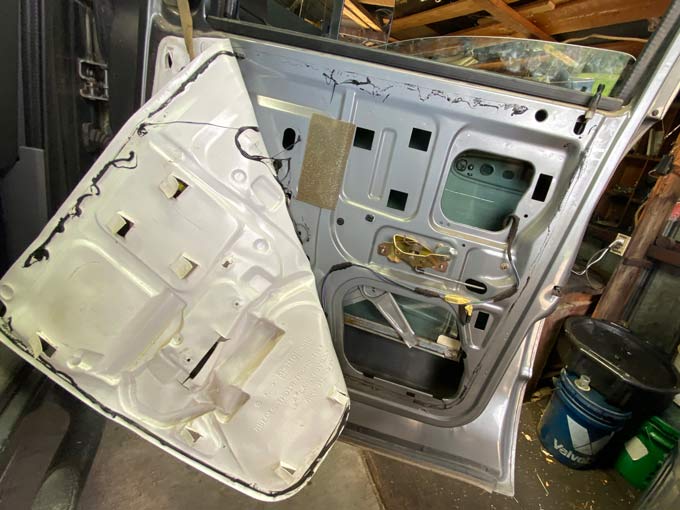 Finally, push up and pull out on the door panel to remove it and set it aside. You shouldn’t have to remove the speaker.

Chances are if your Dodge Ram 2500 power window has dropped, it fell off it’s track because the nut holding it on released from the clamp. Feel around inside the door compartment and you’ll probably find the small bolt and nut.

In the exploded diagram above, you can notice the white plastic clamp attached at bottom right of the window. (Bottom left on driver side window.) There is another on the forward/front side of the window. These clamps are permanently affixed to the window glass.

Align both of these clamps into the regulator track. You can use the power window switch to raise the track up and down until is is best accessible through the door panel openings. Once back on track, you can slide the window to the right or left and align the retainer clamp into its slot. That is where you will reattach the bolt and secure it with the nut.

Don’t get me started on how this whole frequently fallen window issue is due to a tiny recess that is supposed to hold the retainer nut in place. That’d the design flaw. Why isn’t the clamp simply bolted to the track!? No, the bolt is glued onto the clamp. But I digress… </rant> 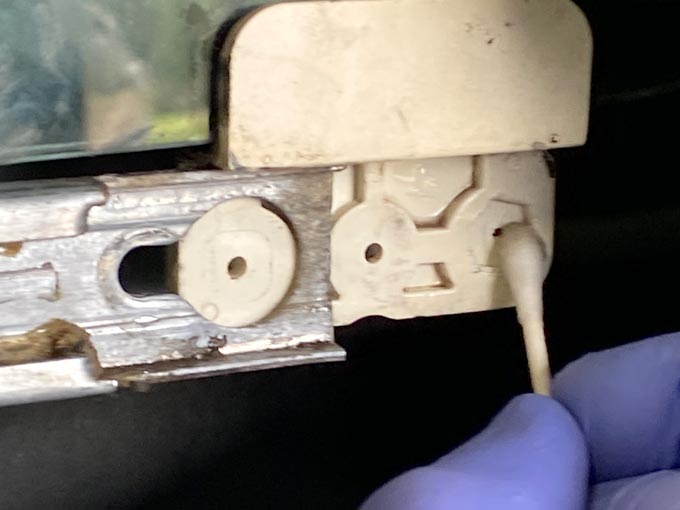 Clean the (very shallow) nut shaped recess in the retainer clamp. Use alcohol and a Q-tip to remove any debris and oil. Get yourself a high-strength quick-setting epoxy. 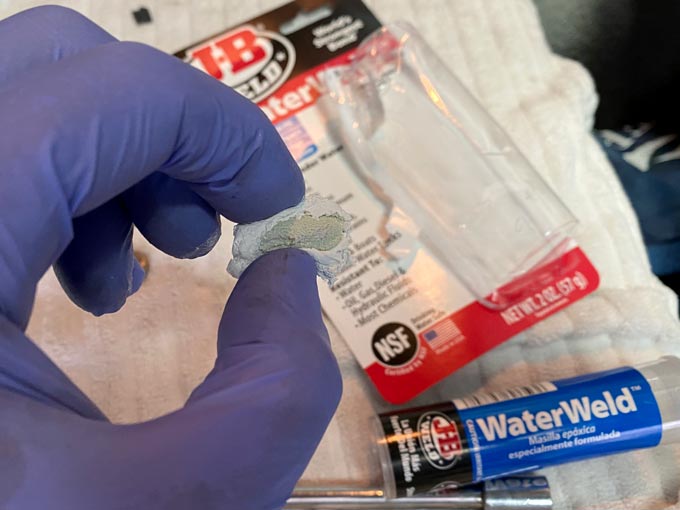 We used J-B WaterWeld because that was recommended to Rene when I sent her to the hardware store. The putty made sense, since it would not drip before drying when being applied to the vertical surface. Just be sure to get a high strength adhesive that dries fast, sets hard, and will adhere to both plastic and metal. 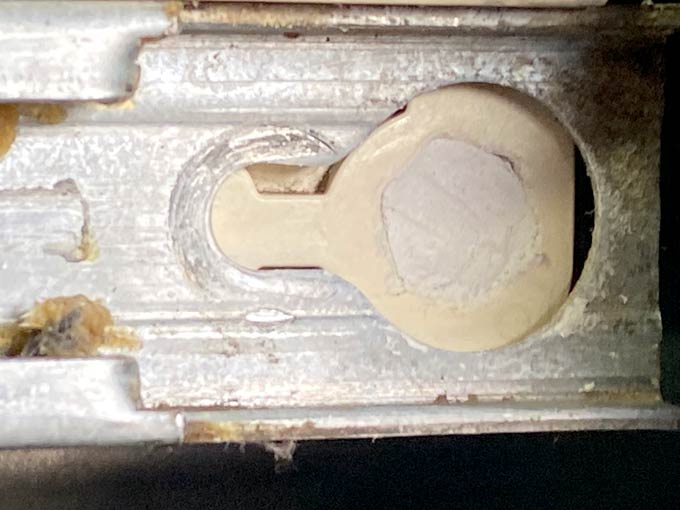 Thoroughly mix the putty or epoxy resin. Fill the recess with epoxy and while it is still soft, firmly press the retainer bolt in place. Apply an ample amount of mixed epoxy around the bolt to secure it well once dried. Be sure not to get any epoxy in the threads of the bolt. 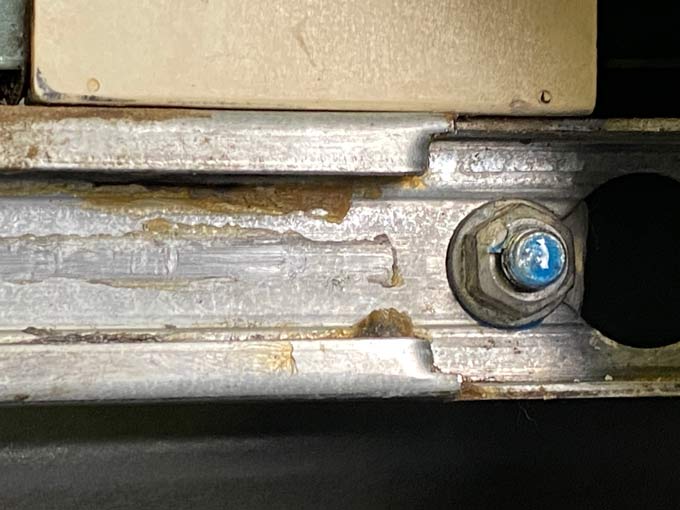 Loosely attach the nut to the bolt. Slide the window into the recess where the nut tightens. Use the switch to move the window regulator up and down. With the window all the way up, ensure a snug fit on both sides. Make sure there is a good seal all around the window. If not you can slide the track back and forth. Once you’re certain the window is in the right place, tighten the nut onto the bolt securing it to the track. Do not over-tighten.

If I ever have to do this again, I’m going to drill a small hole for that nut and insert it through the clamp to keep it in place. I’m sure at some point here, someone will explain to me why that will be a bad idea with an essay about this not being a Dodge Ram design flaw.