I have to admit, when Isaac Aaron Media first contacted us about appearing in an RV lifestyle segment of a series they’re producing for Camping World, I was a bit wary at first. To be perfectly honest, I didn’t care to appear in a commercial since our campsites never quite resemble those seen in the stereotypical RV dealer advertisement.

I even went so far as to inform them that that our mish-mash of well worn camping accessories is not exactly the most attractive and does not suggest a recent shopping trip at Camping World. I was pleasantly surprised with the response I received, directly from the Camping World rep himself…

Jim, we’re totally fine with whatever your normal setup is. These videos aren’t meant to push Camping World at all, rather to show the RV lifestyle.

Since we rarely spend time in pristine RV resorts, I was totally on board with the idea once everyone agreed to capturing us living our true lifestyle, boondocking way off the grid like we like to do. Even if it did mean passing up a free stay somewhere!

From that moment on, I was excited to be involved. We had a great time shooting on location near Sedona, Arizona, and I am very pleased with the results.

I’m especially happy to see that Camping World’s sponsorship of this #RVingIsForEveryone video series is very discreet. Clearly, they are not selling RVs and RV accessories. They are selling the lifestyle. And for me, that’s easy. 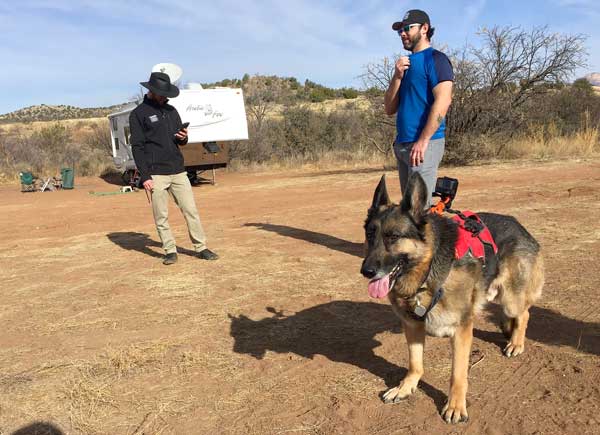 I love sharing our story to help inspire others, and the entire #IAMVideo crew was a pleasure to work with—making it feel easy and natural to do so. The plug for liveworkdream.com in that shot of our RVDataSat satellite dish was a bonus. And the fact that they focused our story around Tripawds spokesdog Wyatt Ray was icing on the cake. That also rang some serious bells, and tugged at certain heartstrings.

Another 15 Minuts of Fame

I’m glad Wyatt finally got his moment in the spotlight. Maybe not a full 15 minutes, but those few days of filming in Arizona were almost exactly ten years to the date when the Nature film crew followed us around to feature Jerry’s story in Why We Love Cats and Dogs, which first aired on PBS in February, 2009.

As you can see, Tripawds and Live Work Dream are my passion, and my purpose…This is My Life. My Work. And My Dream. And I thank Camping World And the whole crew at Isaac Aaron Media for helping us share it.

I may be a bit biased, but I believe ours is the best segment in the #RVingIsForEveryone series. Prior to its debut, Rene and I both felt that the video profiling the RVing Life of Keith and Tia Sims and their full-timing family was the best. I hope Isaac and his crew keep up the good work, and I look forward to watching more of their great videos that prove, RVing is indeed for everyone!

8 Responses to “RVing is for Everyone”