If you haven’t caught on by now, one of the major reasons I love workamping at Vickers Ranch is the variety of projects and the types of heavy equipment I get to operate. Take for instance, the way I gently dismantled a cabin using a backhoe this year, or the various tractors and farm implements I’ve used over the years during hay season on the upper ranch. But wait, there’s more…and much bigger equipment! 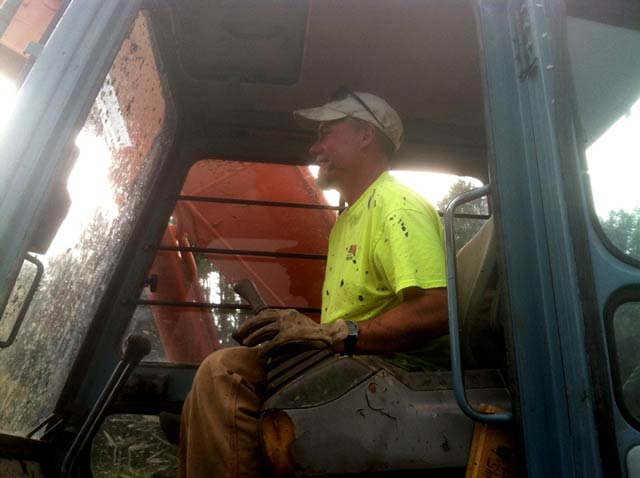 Another reason I love ranch workamping is the work I get to do on the upper ranch, especially when that involves moving the earth. Which is another time it helps to have the right tools for the right job. This year, that earth-mover tool was the Hitachi X200LC excavator, aka Track Hoe, aka Hoe Chi Minh. 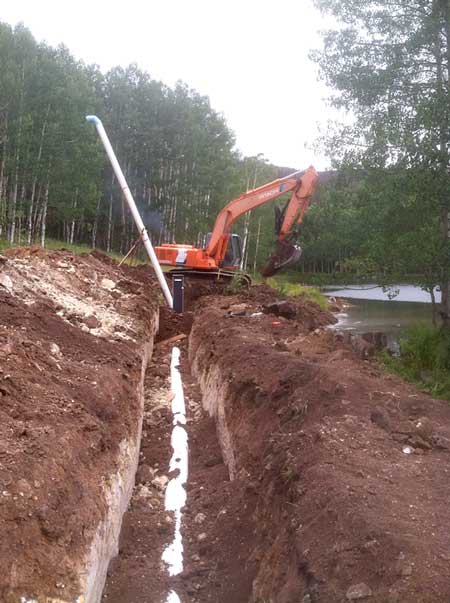 There’s something about moving more than a yard of dirt and rocks at a time—especially when you have to move a lot of dirt and rocks, and really big rocks. Specifically, this year the project included digging up a 100+ yard irrigation trench, reinforcing the rim of a lake built 50+ years ago, and installing an Agridrain. 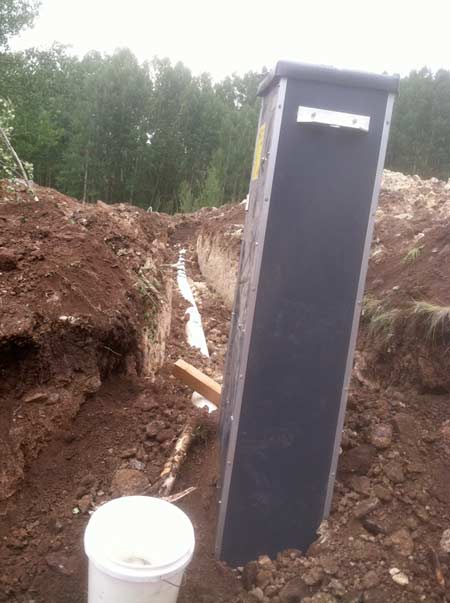 Another thing I like about my workamping job with the Vickers is the many new things I get to learn about ranch work and farming. This year, that entailed installing an Agridrain. This inline water level control structures allows you to adjust the amount of water taken from a reservoir, but I digress. 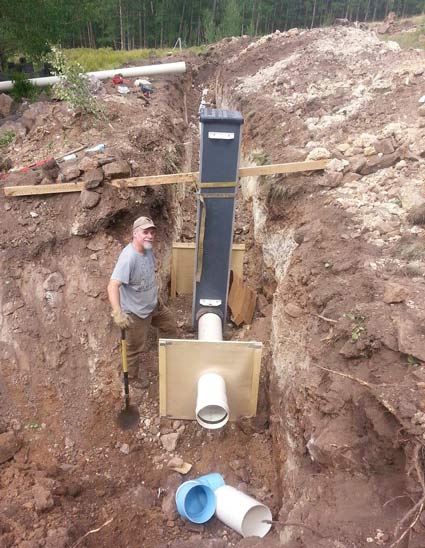 One more thing I enjoy, is the planning and troubleshooting of such projects. And this one was a doozy: The drain tower has to be buried below water level, with 10″ pipe that extends 20± into the lake. But the lake was already there. And it’s a pretty big lake. So… 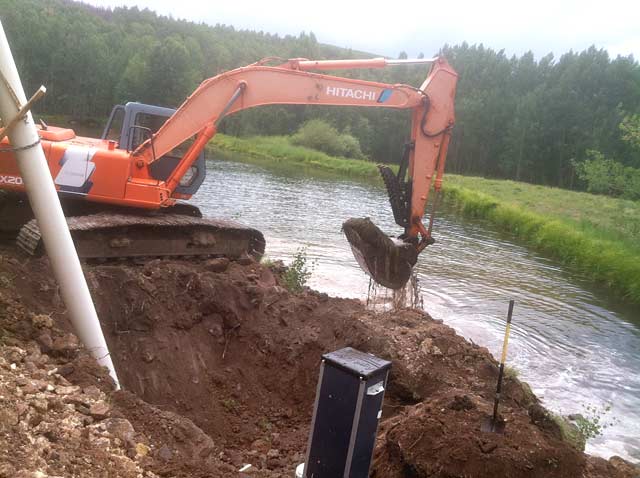 How do you install a drain in an existing lake?

The challenge of adding a drain and irrigation ditch to a lake filled with water was pretty tricky. Paul had a plan that I barely understood when put on paper. But as we started digging and moving pipe around it started to make more sense. Our approach became more clear and logical, but no less tricky! 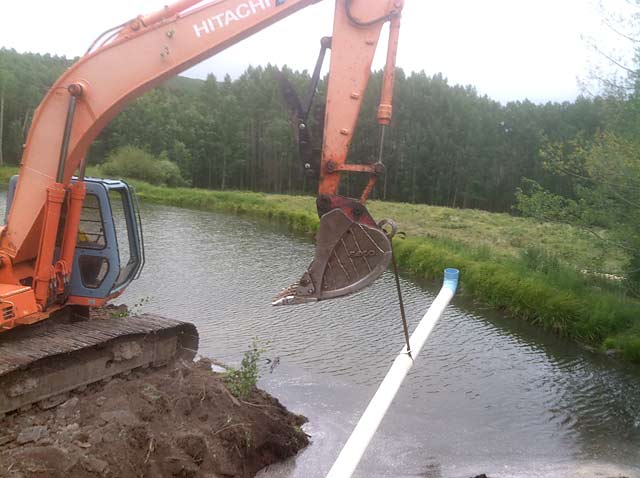 It was exciting, to say the least:

Sounds simple enough. But considering everything that could have gone wrong with this undertaking, I’m still quite amazed and happy to say we pulled it off!

I love it when a plan comes together!
— Paul Vickers
(Quoting Col. Hannibal)

It wasn’t that simple. But we were extremely careful and took our time. The video below highlights only the most exciting part, since I was a bit busy the rest of the time—ensuring the heavy pipe sticking up in the air didn’t snap, for starters.

That last bit with Paul attempting to fill the pipe with water was a joke, more or less. When that failed, another exciting part was him lowering me in the Hoe with a five gallon bucket to scoop up water and fill the pipe—which according to my math, required a few hundred gallons (at least) to sink to the bottom of the lake. That was gonna take a bit too long, considering I was sitting in the bucket of a huge steel machine, extended over the water, with a lightning storm moving in.

So what did we do? We came prepared with a sump pump, generator and plenty of hose. After placing the pump in the lake, and running the hose up to the top of the Agridrain, we sat back and watched the pipe slowly sink as the drain started to fill. 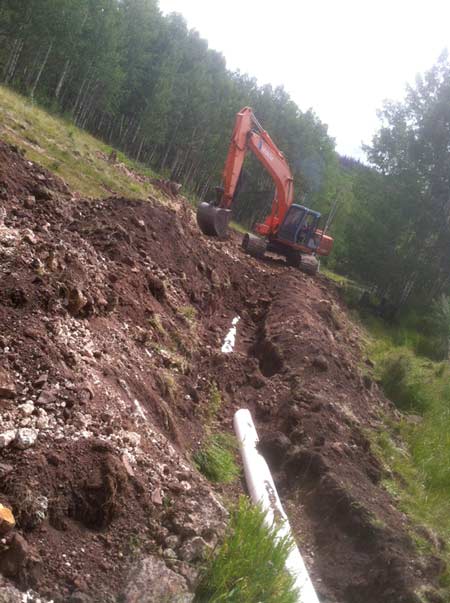 After a bit of clean up work at the lake, we tested the drain and it passed water into the pipe just like it is designed to do. Watching it come out the other end way down the hill was a thrill. 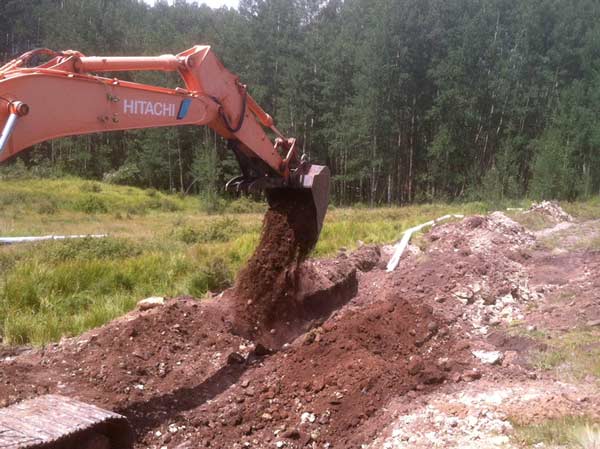 After burying all the pipe, and adding a culvert over the old spillway, and we were able to call another exciting workamping project: mission accomplished! 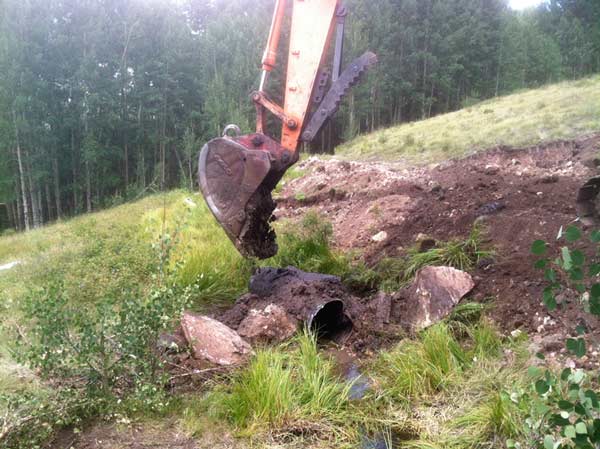 This job now ranks as one of my most exciting and educational workamping jobs ever. Using the excavator to muck out the lake and build up the rim after the drain was installed was only half the fun.

If you found this post while researching how to install an Agridrain, leave a comment with any questions or tips for others.

If you’ve had any exciting workamping jobs operating heavy equipment, share your story with a comment too!