“The last free place on earth is no longer going to be free!”

This is not true. But it was the general sentiment of many speaking their minds at the inaugural meeting of the Slab City Community Group, Inc. on Sunday, January 19, 2014 held at The Range. If they paid their dollar that is. 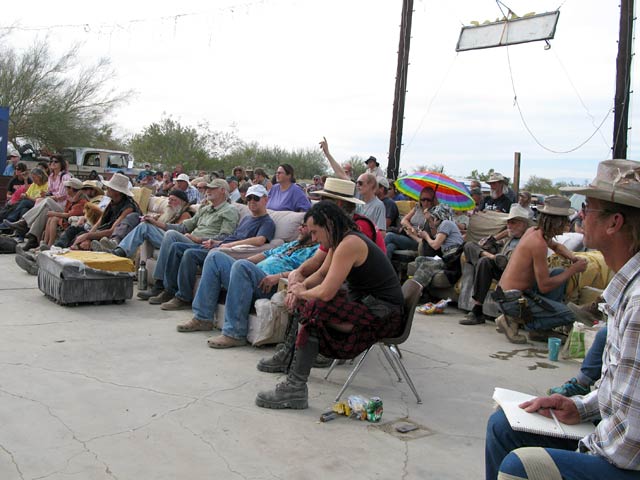 Let me back up. There are a lot of rumors about Slab City going around these days, and what might happen to the land the state is reportedly trying to sell. Reported by whom? Good question! I won’t pretend to know many facts about what is going on, but I do know one thing for certain. Public information about the formation of a non-profit organization that could take ownership of the property in a land trust deal with the State of California is severely lacking.

A private, nonprofit organization that, as all or part of its mission, actively works to conserve land by undertaking or assisting in land or conservation easement acquisition, or by its stewardship of such land or easements.

What Land Trust deal? With whom? When? Such a lack of information results in outrage when people jump to conclusions about what might come of their home, or favorite winter destination. And that’s exactly what happened at the meeting we attended. 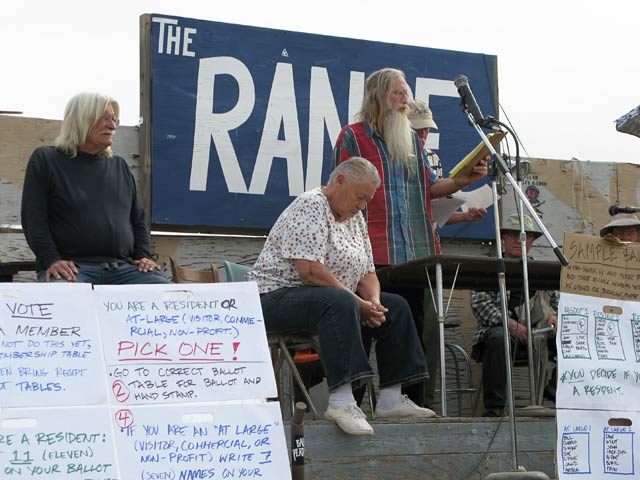 One of the first points of order at the first meeting of any official 501c3 corporation is to read rules about certain actions the Board may or may not take in their line of duty. Even before electing Directors, the interim Board at this meeting did just that. When they got to the part about the organization having the ability to acquire property, suddenly that’s what the meeting became all about. No such item was on the agenda for the day’s meeting—the sole purpose of which was to form the corporation and elect a Bord of Directors. And that they did.

Why? That’s a great question too! 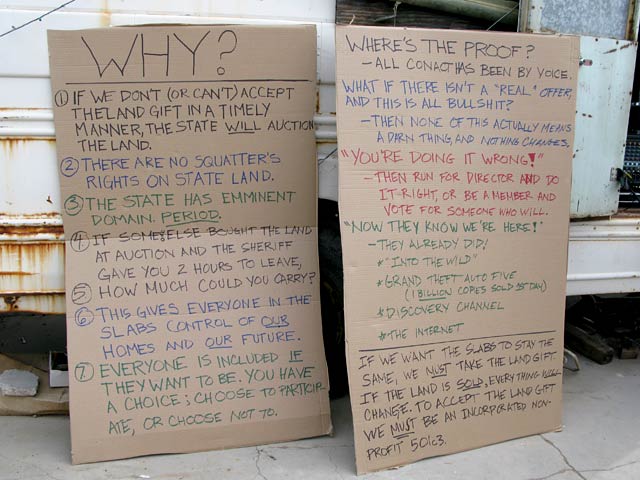 Those involved with the association’s formation profess the state of California can no longer own the land on which the slabs sit, and will be putting it up for auction if they cannot gift it to a nonprofit organization willing to take ownership—and take on stewardship—of the property and surrounding area. Who contacted who first, how true this is, and what proof exists is up open for discussion.

On the other side of The Slabs one resident reported speaking with a CA State Land Commission rep who said:

“The EPA has made NO threat about Slab City… [and] The Land Commission has not tried to sell or auction Section 36 in at least 15 years.”

Apparently the only concern with section 36 is a complaint filed by the CA Dept. of Toxic Substances Control regarding dried paint cans lying around at Salvation Mountain and the structure’s crumbling condition. But I digress.

Other nagging questions remain. Who’s idea was it to form the association? Who was this interim Board and who got elected? Are they all Slab City residents?  What constitutes a resident? Are they in agreement about this intentional community? I doubt that last one.

What information I could gather, I gleaned from two groups on the Faceborg, the Slab City website and by word of mouth.

What I Do Know

The best documented report I found of what’s going on with the SCCG and what the future brings for The Slabs is this document:

From my own personal experience, I only know that a Board of Directors was elected at the meeting after we left. Exactly who? I have no idea, nor could I find out where the group is keeping its public records.

I hear their first meeting is scheduled for a few weeks when they will discuss the formation of a Slab City Bill of Rights. That’s a start, but is it necessary?

One thing is clear. Factions have formed, and as one old timer at the Slabs personally told me, what we have here is, “A Family Divided”.

Factions will feud. There’s plenty of that going on in the groups, but I have heard of no physical retaliation that has been known to occur at Slab City in the past. Hopefully everyone can help develop a solution to any land deal if one exists, or at least agree to disagree and move on. 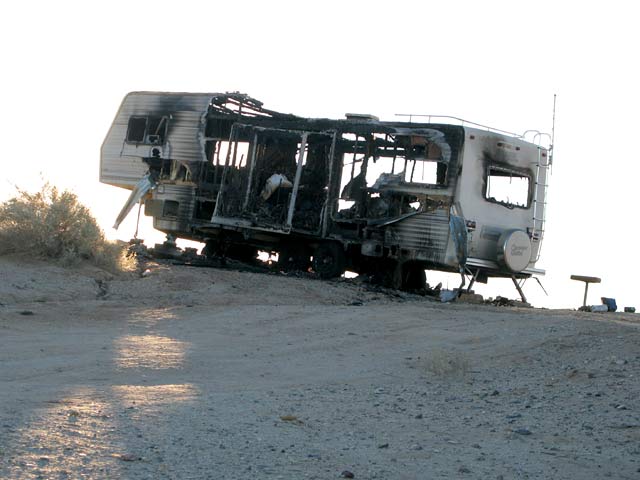 According to their Facebook Group, the Slab City Community Group was formed years ago, “born out of a desire to ‘Say No To Violence’ at Slab City (or The Slabs)”. This informal group of f Slab City residents and visitors has a simple mission:

“To provide a forum for people to share information about and connect with people at Slab City, California.”

Fair enough. Hopefully none of the rants and flame wars going on between those in disagreement about the future of The Slabs and formation of any sort of governing body won’t ignite any actual flames.

For the record, I am not taking sides on this issue. While I do believe seasonal snowbird slabbers like me do have an interest in whatever happens, I also understand how full-time residents of The Slabs have much more at stake regarding the results.

That’s why I paid my dollar to speak at the SCCG inaugural meeting. OK, it wasn’t my dollar. But I wanted to ask a couple procedural ensure this group was being founded legally and they were playing by the rules—Robert’s Rules of Order, that is. And they were. But I didn’t have any cash on me, and one had to be a member to address the interim board. the annual membership fee is one dollar. A kind slabber paid my buck for me.

Then Rene suggested I maintain a lower profile. 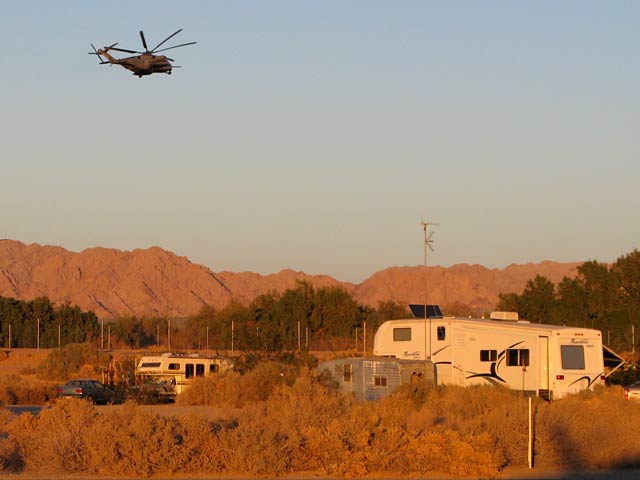 What if the Slabbers do buy the Slabs? Great! But do they know what they’re getting into? And will they share the details with their entire membership in a timely manner as their bylaws dictate? Let’s hope so.

If the State does grant the land to some organization, it may only be doing so to release itself of liability and place responsibility for said land on such a group. What’s to keep them from turning around and insisting the area be cleaned up? Or worse yet, regulated. Can you imagine Slab City Homeowners Assoociation rules of conduct?

If there is no deal, and the State moves forward with an auction of BLM Section 36, will anyone buy it? Nobody has jumped at that chance for 50 years so far. 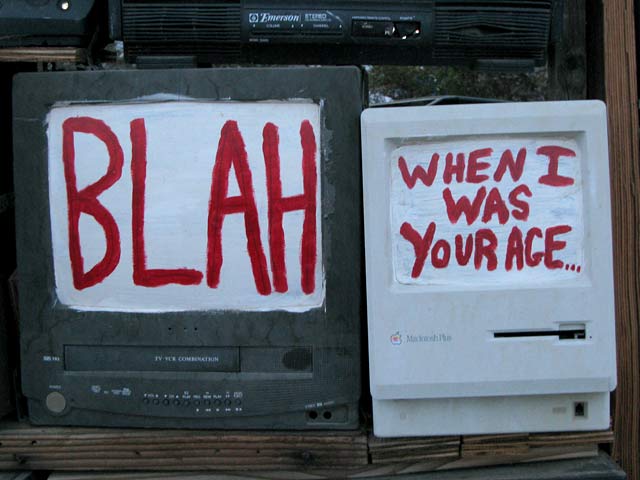 02/15/14: An objective and detailed update on the state of affairs from the Imperial Valley Press

5 thoughts on “What Will Happen To Slab City?”