We usually avoid interstate highway driving, but last week we endured the I-10 haul between Austin and Los Angeles to be here in time for Christmas. 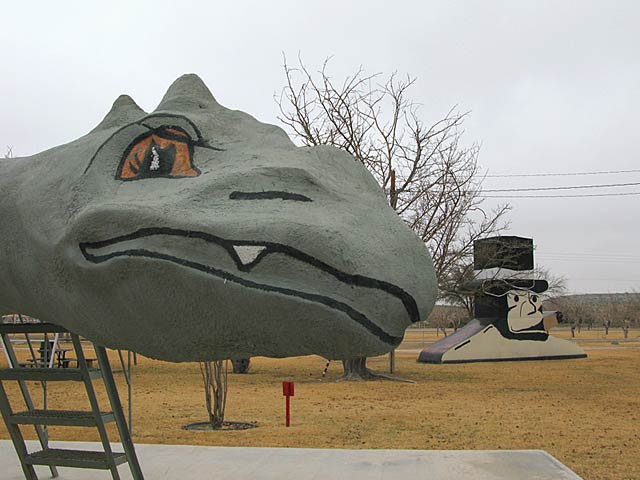 Along the way, we made time for one attraction that’s been on our bucket list, the Alley Oop Fantasy Land and Museum of Iraan Texas.

If you’re stuck on I-10 between El Paso and Austin, don’t miss this quirky little roadside attraction!

Iraan Texas Museum: a Big Gem in a Small Town

When you find yourself driving one of the loneliest stretches of I-10 between El Paso and Ozona, take a few hours to go 13 miles north on Texas Highway 349. 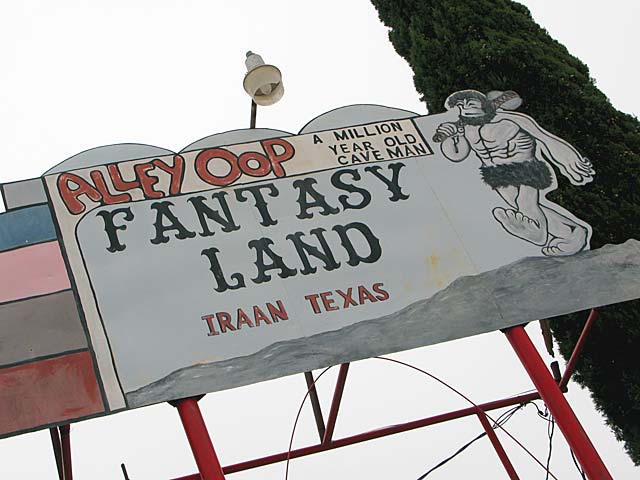 Here you’ll find one of the Lone Star State’s most rustic old towns featuring an abundance of dinosaur-era fossils and a larger-than-life monolith tribute to Alley Oop, that popular caveman comic from the 1930s.

Here’s a short video about this off-the-beaten path West Texas attraction that shows some of the highlights that make this offbeat spot so much fun. The park is always open but the museum hours are from 1 to 5 pm (closed Mondays and through Christmas to March).

Iraan sits atop one of the richest oil field deposits in North America. During the early 20th century, oil was discovered on land belonging to Ira and Ann Yates. When a contest was held to name this newly formed town, the winning result was “Iraan,” a play on the couple’s first names.

During the late 1920s, local artist VT Hamlin was fascinated by the bounty of prehistoric dinosaur-era artifacts found in the Permian Basin lands surrounding Iraan. This was during a time when fossils were dug up and discarded without any real regard for preservation.

In 1932, Hamlin gained worldwide fame when his comic strip Alley Oop caught the eye of newspapers around the country. The comic chronicled the time-traveling adventures of Oop, a burly, axe-wielding caveman, his curvaceous girlfriend Oola, a pet dinosaur Dinny and their kingdom, Moo.

Snooks’ Museum Walks You Through Time 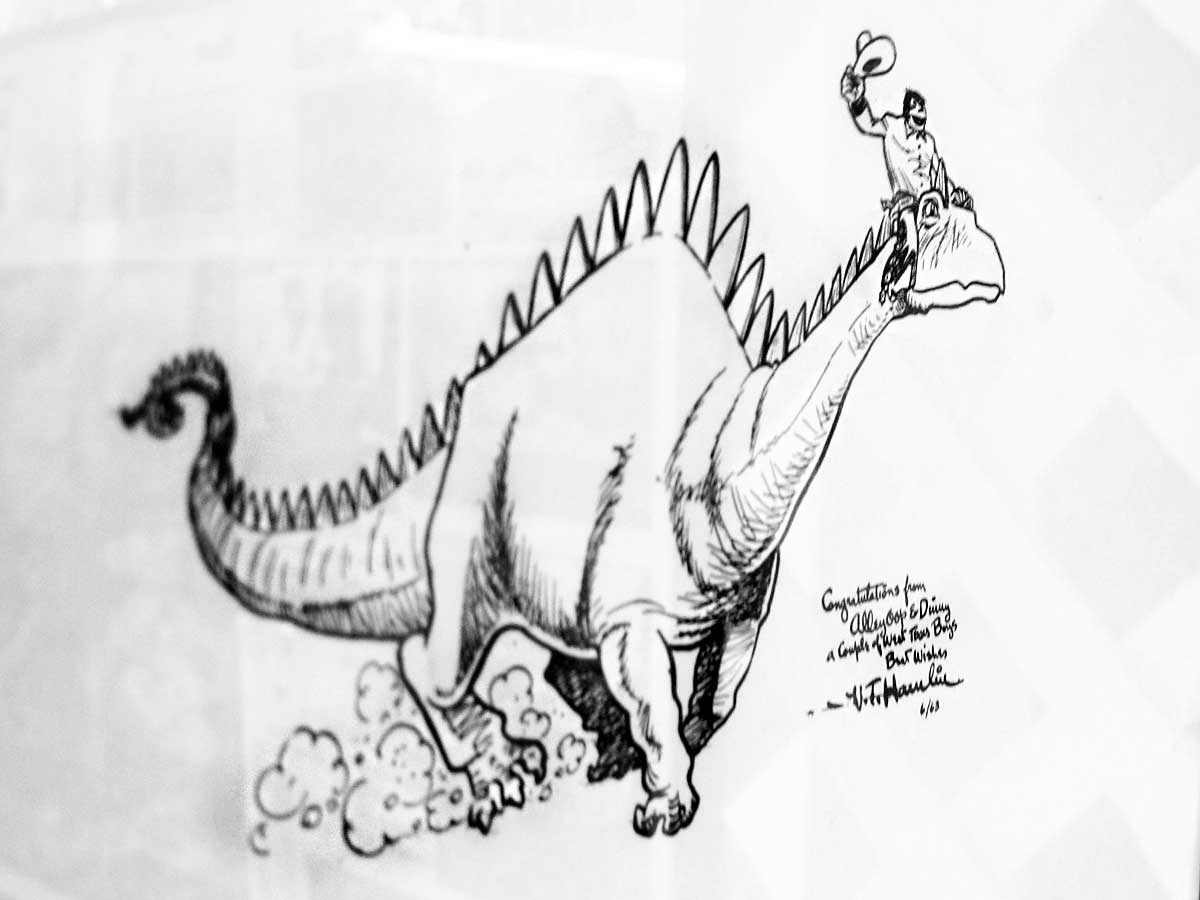 This free attraction features hundreds of local artifacts from prehistoric times to the town’s oil boom heyday to the modern era of alternative energy development.

You can spend hours examining these treasures and learning about the region, but you’ll want to reserve even more time to chat with Snooks, who at her advanced age is still running the museum and going on field digs for local artifacts. This rugged but charming western cowgirl who actually lived on the ranch where oil was discovered in Iraan, can tell you endless stories about the region’s rich western history. 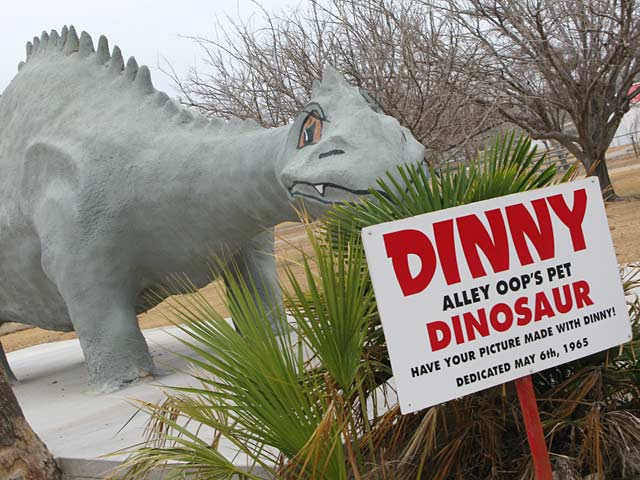 If you don’t have enough time to get to know the museum, you can spend the night in your RV. Iraan has two city parks (one located adjacent to the museum) with full hookups for just $12.00 a night. Visit in the springtime, and Snooks, along with the local archaeological association, will welcome you to come along on a real fossil dig.

Our visit to the Alley Oop Fantasy Land and Iraan Museum was too fast, since we were booking it west to California while trying to beat an oncoming winter storm. But we’ll definitely return; this little western outpost is too entertaining to miss whenever we’re on I-10. 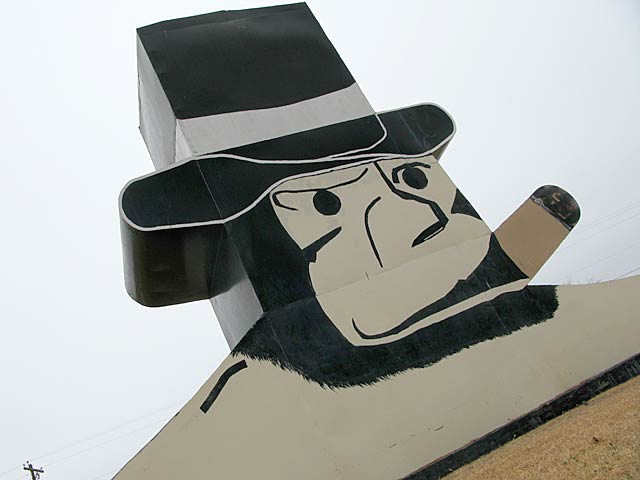 Get off the interstate and see the real Texas. Don’t miss this one-of-a-kind attraction.