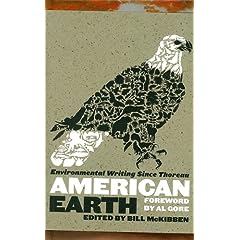 We were recently asked to review the new Library of America book, American Earth: Environmental Writing Since Thoreau. Edited by Bill McKibben, this anthology covers environmental writing from Walden Pond to global warming.

It sounds like a great read, and we’re honored to review it. But that might not be very soon since we’re on the road again. We’ll have the book forwarded as soon as we have a steady address for a while, or we’ll pick it up at Thanksgiving.

Until then, check out this overview from the publisher and see what major publications have to say about American Earth …

New York, NY – The Library of America’s definitive anthology of American environmental writing, American Earth: Environmental Writing Since Thoreau, is being called a must-read for college students this fall, whether they are enrolled in environmental or literature programs or merely seeking to deepen their understanding of the historical and intellectual roots of the modern environmental movement.

Edited by renowned environmental author Bill McKibben, and featuring a forward by Al Gore, American Earth has been adopted in the curricula of several universities across the country, from Missouri to North Carolina, Michigan to California. The anthology is also gaining a wider audience among readers who share a concern about environmental preservation and global climate issues.

“We have been very pleased with the response to American Earth,” said Max Rudin with The Library of America, a New York-based nonprofit publisher dedicated to preserving America’s most significant writing. “It is essential that the voices of these great writers—Thoreau and John Muir, Rachel Carson and Aldo Leopold, among many others—continue to be heard loudly and clearly.”

U.S. News & World Report says that McKibben’s book, released on Earth Day 2008, has “traced the powerful bond between literature and natural protection through the nation’s history.”

“The idea that we might…leave some of [nature] aside, and there might be a dark edge to modernity – it took John Muir and Rachel Carson to sit down, clear their throats, and say at some length what was what,” McKibben told U.S. News in May. “Even the global warming movement broke out from Al Gore giving a slide show.”

According to Publisher’s Weekly, American Earth “should be read for the sheer beauty of the writing.” Booklist says “if you choose one environmental book this season, make it American Earth.” The Boston Globe wrote: “for anyone seeking to understand the historical and intellectual roots of today’s environmental movement, American Earth is the best resource between two covers.”

About Bill McKibben
Bill McKibben is the author of books including The End of Nature (1989), the first account of global warming for a general audience; and most recently Deep Economy: The Wealth of Communities and the Durable Future (2007). Since 2006, he has organized the largest demonstrations against the causes of global climate change in American history. He is a scholar-in-residence at Middlebury College.