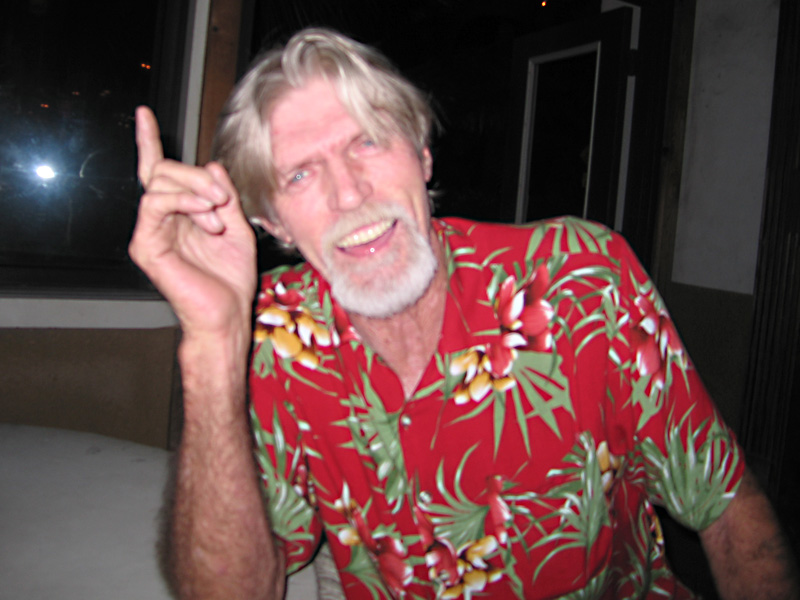 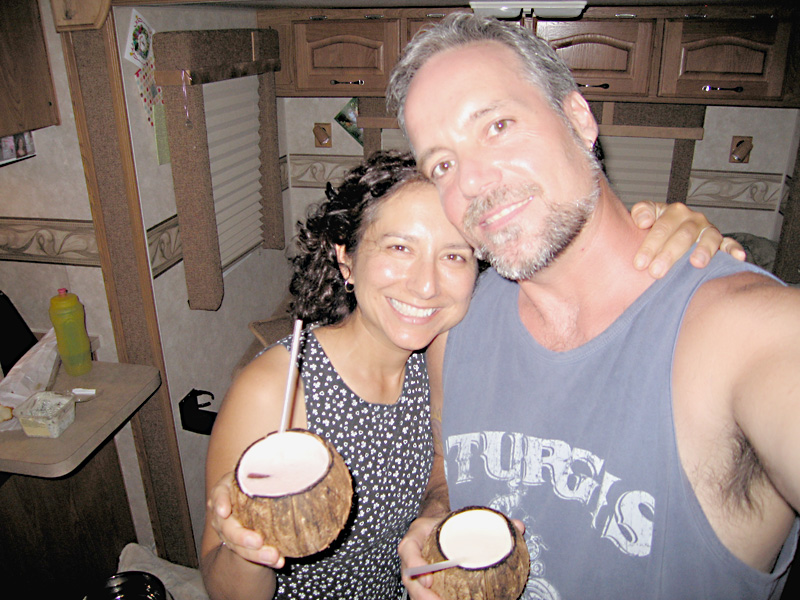 Being in Florida, we just had to have tropical drinks. I’ll write again soon about our whole coconut experience, so stay tuned for that. But in short, we plucked a couple coconuts off a tree down the road with every intent of drinking tropical drinks out of them on New Year’s Eve. Easier said than done, but mission accomplished.

First we sought out a local Tiki Bar. We had noticed the Original Tiki Bar down at the Fort Pierce Marina where we’ve been doing the Farmers Market on Saturday mornings. But that was too far to drive on amateur night. We were happy to find Earl’s Hideaway Lounge and Tiki Bar in Sebastian just down the road from us.

Earl’s is a fun and lively place where one will find a definite taste of local flavor. Just don’t expect to taste a Mai Tai. The bartender on duty simply disappeared when I ordered my tropical drink of choice. Turns out she had to go look up the drink recipe. It must have been a pretty big bartender’s guide

A few minutes later, a different bartender came to take my order, and said they couldn’t make a Mai Tai. I said with a grin, “I heard this was a tiki bar!” 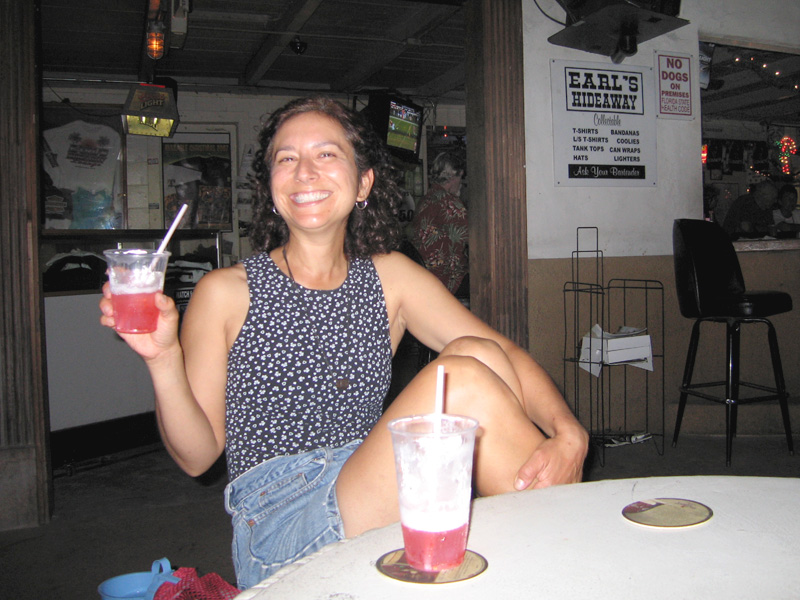 Now I’m no Mai Tai snob, but I respected their effort to make the official version or nothing at all. I settled for Meyers Rum and pineapple juice and looked forward to checking out the outdoor bar. Even if they couldn’t make me a Mai Tai.

While waiting for a Rum Runner – Florida’s state drink, and René’s tropical poison of choice – the barfly I was trying to avoid pointed to my drink and slurred “Thatsh Dangeroush” a couple times before her partner returned. She turned and informed him that I was drinking “Mambo Magic Juice.”

He quickly informed my that she could drink six beers and was on her fifth. But if she had one of those, pointing to my juice, she would be dancing topless on the tables. Having no desire whatsoever to see this woman’s breasts, I promptly handed her my drink anyway. We all had a laugh they just had to taste my cocktail. It appears that my Meyers and pineapple tastes striking similar to a Painkiller. I’ll have to try that next time.

I finally got our drinks and returned to find René also getting slobbered on by some drunk. This guy had already greeted us when we arrived. This guy was a serious Nick Nolte lookalike, and was accosting Jerry with almost too much love. A lesser dog might have bit anyone who shook his head so wildly, but Jerry’s a good boy. Or perhaps he took notice of the sign we were sitting by that said, “No Dogs On the Premises by Florida State Law.” 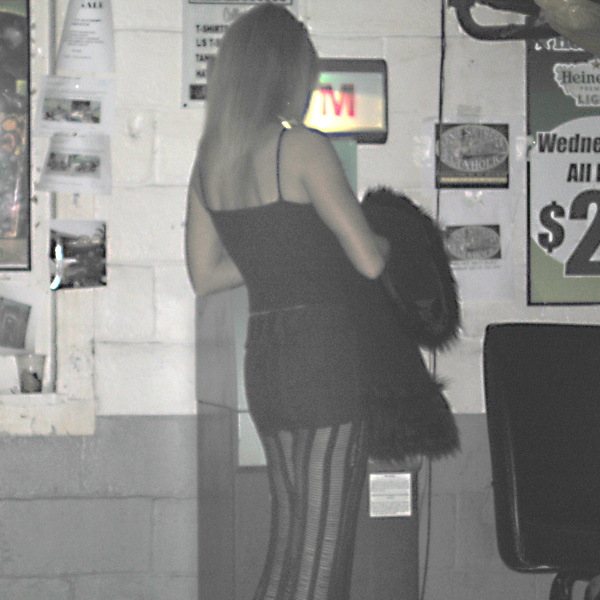 I have yet to taste a Rum Runner I like. This one tasted like sugar free bubble gum. But René liked it and we did get an ample serving of blender extras. We sat, drank, were merry, and enjoyed watching the obvious regulars and widely diverse motorcycle crowd – your token vets, typical bikers cussing up a storm, banker types on shiny new hogs, and the family guy that showed up before the minivan with his wife and kids.

Once we saw Mr. Nolte stumble into his car and take off. We decided one drink was enough. After all, we had coconuts and a bottle of Meyers waiting for us back on the farm. But first we had to check out the “Tiki Bar” outside. Tiki indeed … sand, palm trees, cool breeze and all. We vowed to go back before we leave Vero Beach.

The band was just setting up, so we just sat for a bit to soak up the scene. But of course, Jerry stole the show. After a young girl and her mother came over to say hello, we met a couple of local newlyweds. Very local. If like them we lived within walking distance to Earl’s, it might be a dangeroush place indeed. 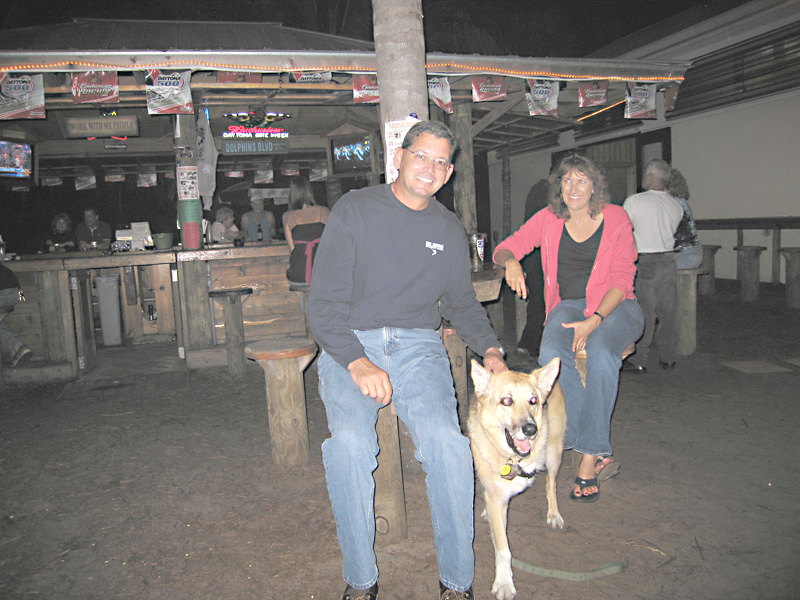 Gene and Terry were a fun-loving couple maintaining their composure, but it was only 8:00 after all. Who says engineers can’t party?!?! They are both public civil engineers. Civil servants indeed. She builds bridges and he tears them up. A bit envious of our full-time RVing sabbatical, Gene gave us plenty of tips for parks to visit and places to see as we traveled Florida. Terry on the other hand, had seen her camping days. As a surfer she spent many a cold night on the beach. Too many.

We wish Gene the best of luck in convincing Terry to hit the road in an RV someday. And we hope to see them again at Earl’s before our workamping stay on the farm is over and we move on ourselves.

Epilogue: We returned to the Rig and made ourselves dinner and tropical drinks, which enjoyed out of our fresh organic coconuts. Me, a Mai Tai (or two) courtesy of Mr T’s mixer. And René, another Rum Runner made with a mix that tasted like toothpaste to me.

We actually stayed up past midnight – 12:01 – playing Scrabble. Whoopie!