We’ve had too much doom and gloom around here lately so as promised, we’re continuing with more gratuitous photos of our Alaska and Canadian food on the Alcan highway.

Start Drooling: Here’s Our Favorite Alaska and Canadian Food on the Alcan

While taking in the sights on our Alaska RV cruise, we ran into an interesting local who gifted us freshly caught salmon. 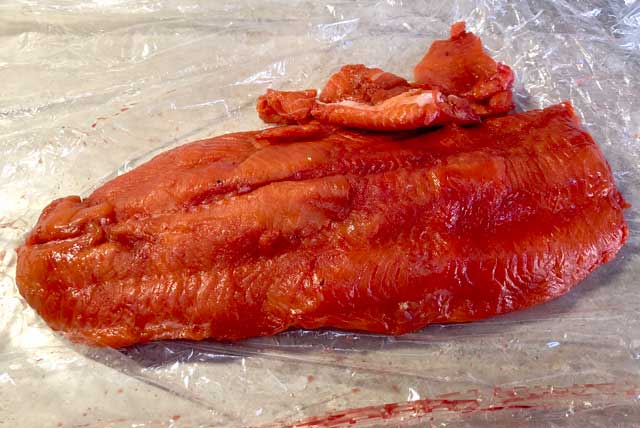 Don’t adjust your monitor. This is what fresh salmon looks like.

Jim and I are 90% vegetarian but we do consume some dairy and indulge in a rare meal of fish. Since we are committed to only eating U.S. (or Canadian) caught fish now, this was a rare treat. 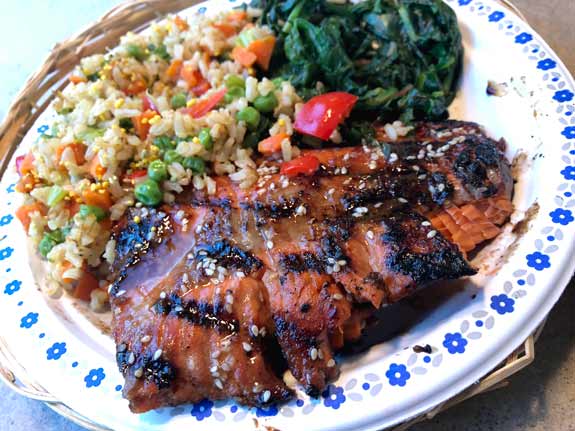 With grizzlies all around, we only barbecued once the whole time.

Store bought salmon cannot compare to fresh caught. Later we learned that Chinook salmon over-fishing is killing the world’s last surviving orca whales, so it looks like our salmon indulgences will be extremely limited now.

After leaving Haines we zipped up to Braeburn to enjoy some of the Alcan’s best and biggest cinnamon rolls. They weren’t kidding. These suckers were huge and they were good! 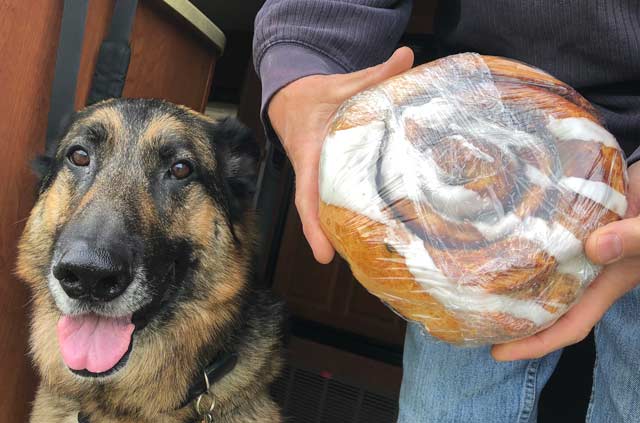 Braeburn Lodge cinnamon rolls are worth the trip.

During our southward jaunt to Hyder, Alaska, there was one restaurant we knew we had to try. Actually, it was the only restaurant in Hyder. 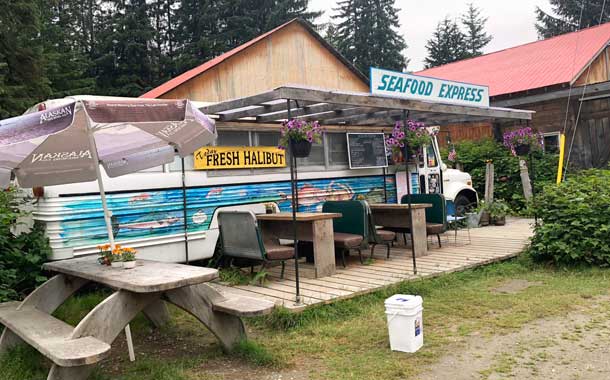 The Hyder Bus was cool before food trucks became trendy.

“The Bus” as it’s dubbed, is run from this charming location off the main Hyder drag. It’s been around for 20 years, making the best fresh fish meals on the planet. Or at least in Hyder. 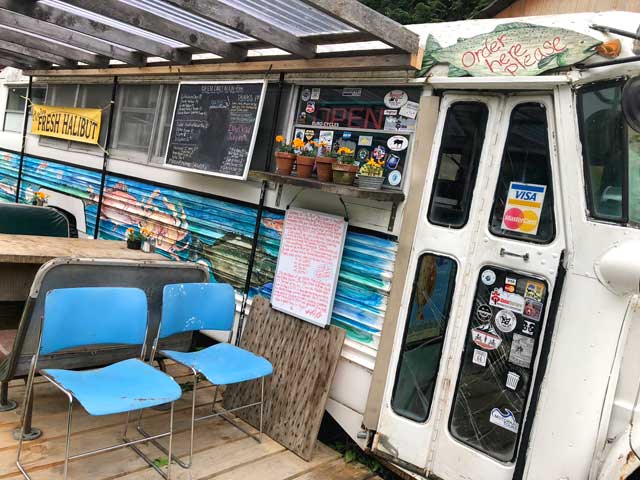 A lot of love has been poured into the Bus over 20 years.

The Bus is literally a one-woman show, and she’s been cooking for customers for 20 years. Word on the street has it that Diana is going to call it a day next year, so the future of this little eatery is uncertain. We are so thankful we got to enjoy her meals. 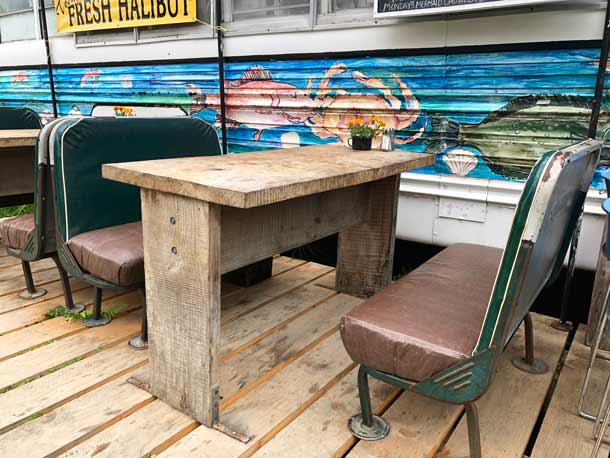 We played dominoes while we waited for our meal.

Her family members are lifelong anglers in the waters off Hyder. They catch all the fish for the bus and in the old days would sell to the public. But over-fishing of salmon and halibut in Pacific waters has changed all that and they can no longer keep their retail operation going. We were lucky to enjoy halibut on the day we arrived. 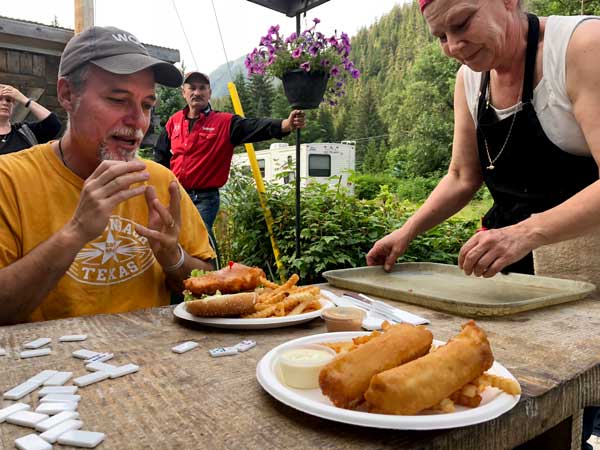 Diana’s cooking is worth the wait.

The cost of halibut in grocery stores has gone up so much that now we only buy it when we eat out. This fried halibut burger was such a treat!

The fish and chips was just as tasty. Now do you see why we put on a couple pounds on this journey? 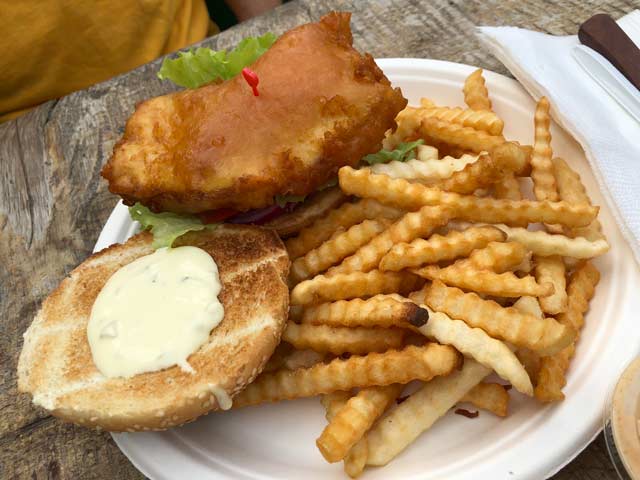 No it’s not gourmet, but still damn good.

Diana makes her own tartar sauce, which was dreamy. We blew it and forgot to buy some to go. 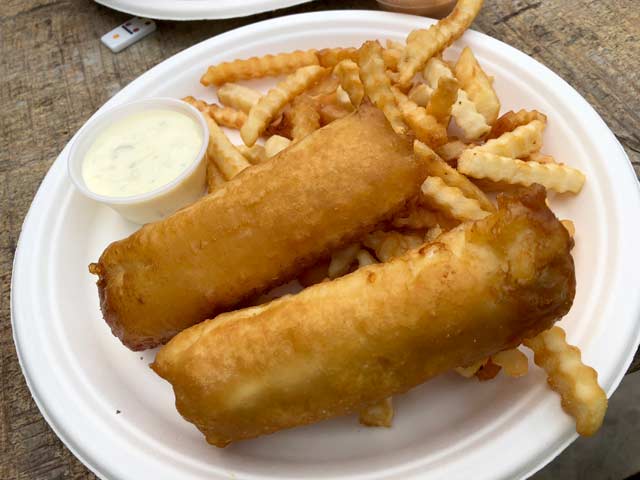 No salad greens to be found, but we didn’t care.

Of course being the frugal RVers that we are, we didn’t always eat out for seafood. Jim made me this yummy birthday dinner of Prince Edward Island mussels and clams over pasta. I loved that we stuck to only eating “local” seafood. No more eating toxic shrimp from Vietnam or overfished white fish from India and South America. I’d rather not have any at all than continue to keep poisoning our bodies and polluting the planet with that crap. 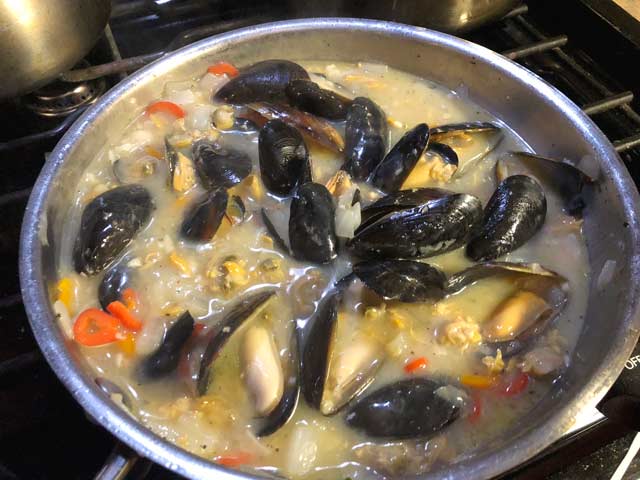 Jim flexes his gourmet chef muscles with a birthday dinner for me.

Ready for more mollusk love? Check out this meal that we enjoyed at The West Coast Grill in Nelson, BC. 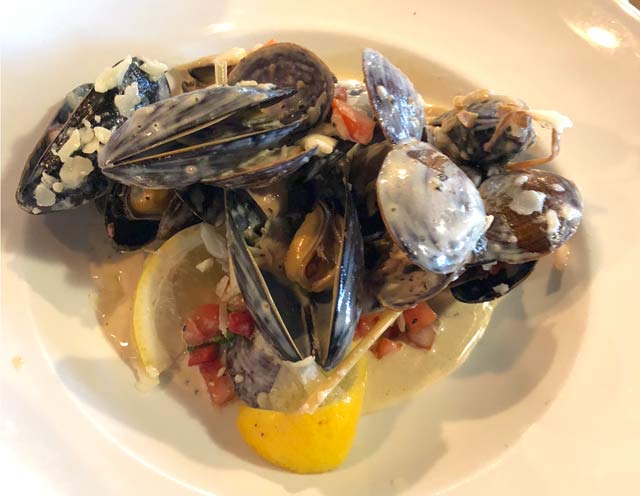 We only had appetizers but this meal was our favorite all summer.

We didn’t mean to have such a fine meal that day. Their $1 oysters promotion brought us cheapskates in. We were only going to drink and down the oysters, but by the time we arrived, they were all gone so what else could we do? 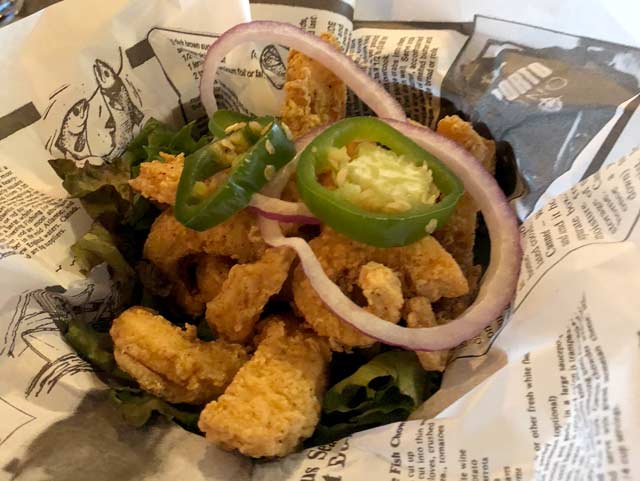 The fair-food look is deceiving. The calamari batter was heavenly.

West Coast Grill has a great appetizer menu so we sat barside and dove into calamari. This batter was incredible: so light and non-oily, and sooo good. But there was one thing missing . . . 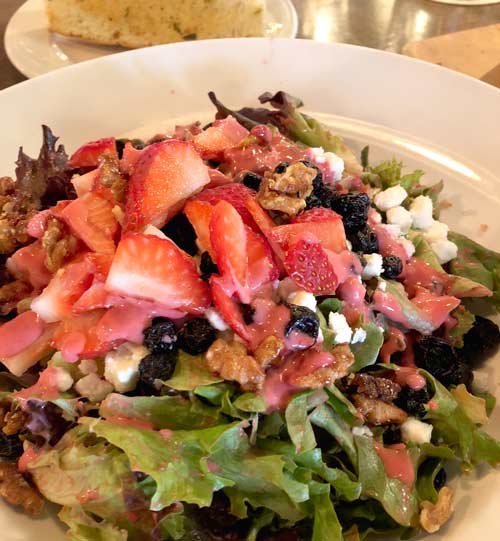 We finally found some greens!

Ah, we found the healthy side to our appetizer meal. And that strawberry balsamic dressing was almost as good as dessert. But not quite. . .

And the end of our date night, we capped it off with some local BC ice cream. 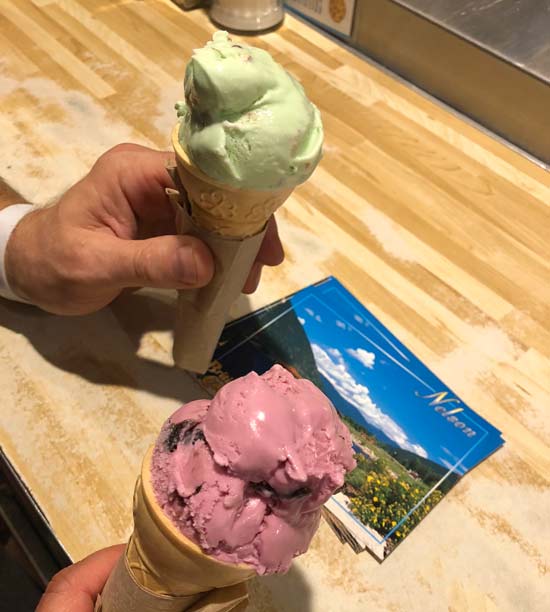 Another rare treat for us: real, local, ice cream!

I know it looks like we ate out the whole time, but we really held back. It wasn’t too hard, because our Alcan road trip was mostly in remote territory with few restaurants that actually appealed to us. When we did eat out, we went big. And consequently, got big too. The booze we drank didn’t do our bodies any extra favors, but Jim will tell you about that on Friday.