RVing in California used to be a no-brainer, with endless choices of accommodations wherever you went. But not anymore. As we made our way up from the vast stretches of SoCal’s open desert into more populated areas, we were shocked at what we discovered. 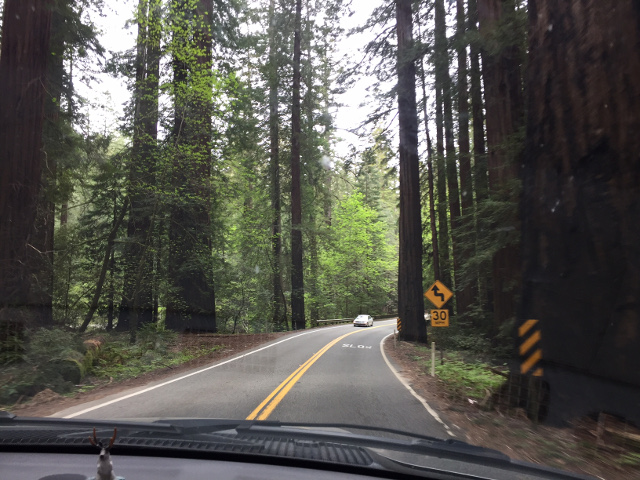 If you ever make your way up into the far northwest reaches of the Golden State, you’ll fall in love with the weather and natural beauty. While the rest of the nation is still waking up from winter slumber, most of California is enjoying springtime weather.

Being a dog is great too. In Humboldt County, you can walk on the beach for miles without bumping into people. 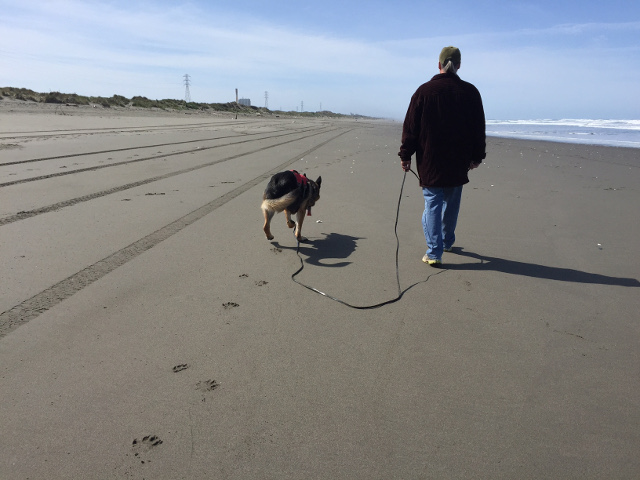 Plenty of elbow room for dogs on Humboldt County beaches.

The journey from south to north is best made this time of year, but there’s only one problem: you’ll have major challenges finding affordable and reasonable RV accommodations. As summer approaches, bank on it getting worse. For instance:

The last point is what shocked us the most. California has always been a pricey place to live, but in the ten years since we hit the road, one thing is obvious when you pull into parks. Many residents are using RVs as permanent, long-term shelter. The California Housing Crunch is at epic proportions. And it will affect your RV travels here. Even our Passport America discount couldn’t save us more than once.

From the moment we pulled into Kit Fox RV Park, located in the former ag-town of Patterson, we knew the crowds weren’t just vacationers or snowbirds headed home.

Four years ago when we stayed here along Interstate 5, Kit Fox RV Park was nearly empty. This time around, only a few back-in spaces remained for overnighters. Today it’s crammed with working-age renters with kids, dogs and RVs in varying levels of condition. Every morning they leave to go to work, presumably in the Bay Area.

Trying to find a spot for more than a few nights became tougher as we wound our way up into our old stomping grounds of Humboldt County. Every RV park, whether it was a “nice” park or a crappy fairgrounds, was full of permanent residents. By the time we made it to Redneck Acres Fairgrounds in our former home town of Eureka, the scope of the problem was magnified a hundred times over. 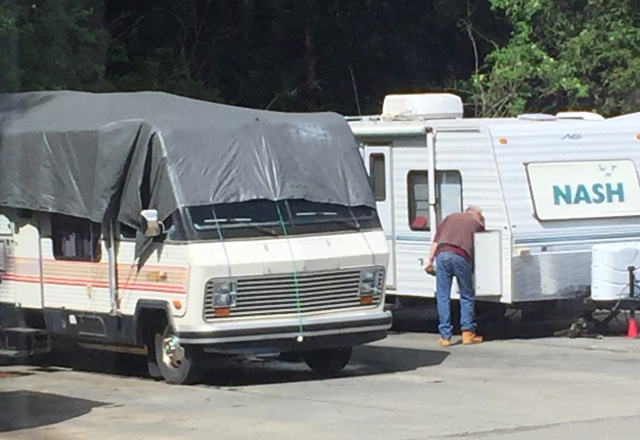 This wasn’t our first visit to Redwood Acres and we thought we knew what to expect. But this visit turned our expectations upside down. The fairgrounds was never meant to house permanent residents, but now the near-capacity, tight parking spots have morphed into a permanent housing development. Ramshackle RVs with tarps are the norm, housing families who appear to be clinging onto the last affordable housing in a county that was relatively affordable when we left in 2007. The school bus arrives to pick up kids every week day. People are living lives in a gravel parking lot with no amenities other than a run-down restroom facility. 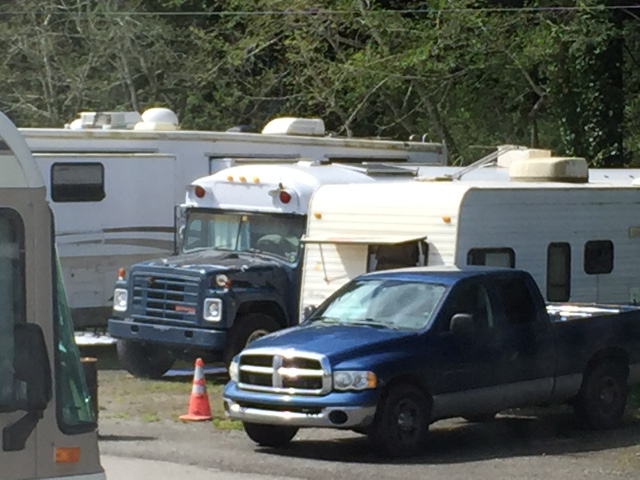 They are not overnighters.

We had deja vu after leaving Humboldt. On our way out of California, we pulled into the Butte County Fairgrounds in Gridley, a small farm town off Highway 99. This spot had a 4-star rating from 2013 on RVParkReviews.com. We figured “How bad could it be?” When we arrived, we turned around and left. The park was in such bad shape and the RVs so dilapidated, we had to leave after our three-week, rainy stint at Redwood Acres. We cracked open our wallet and headed 20 minutes north to the overpriced but swanky Feather Falls KOA Resort in Oroville. After parking on a nice, grassy and wide-open spot, we thanked the Universe for our blessings. At least we had the option to be there.

No matter what your politics are, if you look around many of California’s crowded RV parks without stay restrictions, you cannot deny what you see. The lack of obtainable jobs, education and opportunity for untold numbers of people is clearly growing. When hundreds of Hooverville shanty towns sprout up and people in one of the “richest” states on the planet cannot afford to live in “real” homes in established neighborhoods, our country has a major problem. It has long been said that California is the trend setter for the rest of the nation, even the globe. If that’s the case, we have more major problems ahead.

The question is, what are we all going to do about it?