We don’t say the F word around here. I’m not saying we don’t cuss, I do that plenty! But I’ve heard about far too many RV Fires to jinx us and risk one by simply mentioning it here. And then it happened to us, almost…

How We Avoided Our RV Fire Catastrophe

The sound of that just makes me cringe. The smell was even worse.

One day not too long ago we turned on the air conditioner and Rene said she smelled “something electrical”. I didn’t smell it at first, but promised to look into it. And I planned to do just that, eventually.

More recently, we came home after running errands all day around Las Vegas. We opened up the rig and it was all hot and stuffy inside, so I turned on the A/C. That time I smelled it, right away. The distinct acrid smell of an electrical fire appeared to be coming from the air conditioner vents.

Rene panicked, and I became immediately concerned. Yes, there is a difference. And yes, there was valid cause for both.

She quickly climbed up on the roof to check out the air conditioner from the outside. I immediately turned it off and noticed the air had become foggy—not a thick cloud of smoke like something caught on fire, but clearly something about ready to do just that.

The source was definitely electrical. So I started inspecting the wires up in the air conditioner. Rene had joined me again. She noticed the smell getting worse and started opening all the windows. We started worrying that there may be a fire in the ceiling, so I turned the central fan on (not the A/C) to see if any smoke came out the vents. There was none.

I turned off the fan, and that’s when we lost power.

It was late. We were celebrating the end of a week long, exhausting, successful exhibit at a major veterinary conference. We were parked in downtown Las Vegas with full hookups. And we were now boondocking.

After confirming we were not in danger, we calmed down a bit and I planned to investigate further in the morning. I started searching for decent RV shops nearby and mobile RV mechanics with positive reviews. But I wasn’t about to pay for the first hour of anyone else tearing our home apart to identify the problem—not when I know my system well enough to do that.

First, I immediately unplugged our RV from shore power and turned off the electric water heater. After checking that the loss of power was not a thrown breaker, that is. It wasn’t.

I checked the GFC (Ground Fault Circuit) to make sure that hadn’t just tripped. It had not. And I checked the breaker at the pedestal.

I turned on our inverter, and we had power! That was my first clue to the cause. Anyone with me yet?

Yup, when I noticed we had power from the inverter but not from shore power, my first guess was that the transfer switch had fried. That’s the technical term for gone on the fritz. Fry it did, and it had apparently frizzled a bit too. For the record, when I opened the box and saw that mess, I did say Fuuuuuck… A few times actually—mostly in awe though, not in anger.

I was incredibly grateful that this fritz wasn’t any worse. I really don’t care to imagine how bad this could have been. And I was thankful that the fix was pretty simple. Let’s take a closer look at that mess… 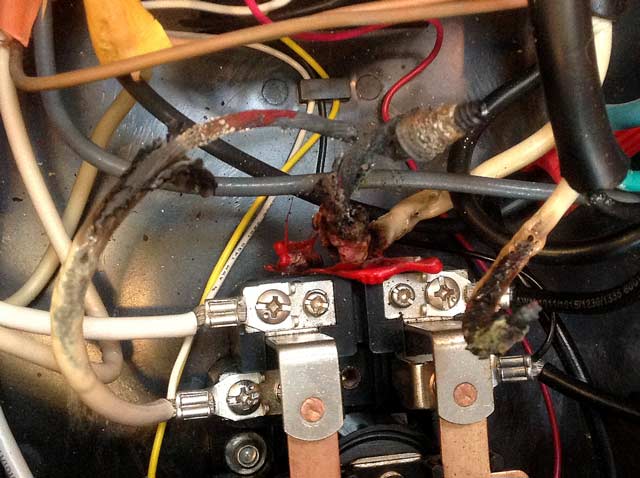 By trimming the burnt wires and and reconnecting them securely, I was able to fix the problem. I tested everything by running the microwave, turning the water heater back on, and switching back and forth between shore power and our inverter a few times.

I don’t think this close call had anything to do with the air conditioner—other than its sudden large power draw being the final straw that broke the poor connection’s back. We’ll test that theory some other time in a more opportune location. (I’m writing this at The Pads, one of our favorite spots for boondocking near Death Valley.)

So, you may be asking why we thought the smoke was coming from the air conditioner vents. Well, for starters, the smell only occurred after turning on the A/C. And, the intake for the air conditioner is in the ceiling almost directly above our Power Distribution Center where the transfer switch is located. That’s a good thing—the air conditioner was drawing the smokey air up, allowing us to quickly identify the problem and associate the cause.

How to Prevent an RV Electrical Fire

That loose wiring part is a big deal. At least it was in our case. When I rewired the Neutral connections in our transfer switch box, I taped the connector to ensure it remains in place. I also loosened the clamp holding the main power cord so I could pull some more slack into the box, preventing the wires from being pulled to tight. And yes, I tightened the cord clamp back down.

All RVs tend to bounce around, a lot. The more we travel, the more things inside our RVs will bounce around. This goes for your books, your dishes, your plumbing, and your electrical wiring. I’ll be adding an inspection of our main power connections to my regular maintenance routine as a result of this close call, for sure!

Fortunately, we have not experienced too many near RV catastrophes like this. (One is too many if you ask me!) I say “another” close call in reference to the time we barely missed getting flooded out of an RV park in Texas. Oh, and a couple RV tire blowouts that could have been much worse. Have you escaped serious trouble in your travels?