In my first post about our RVDataSat 840 system, I mentioned that we were user number 1 on the new InstaSat On-Demand Satellite Internet network launched by Mobil Satellite Technologies. As an early adopter, I expected there to be some glitches, but honestly we’ve been enjoying satellite internet wherever we go for the past three months now and haven’t had any issues.

Well, there was this one thing…

Luckily, it happened shortly after we had the system installed when we were passing through Salt Lake City—where RF Mogul is located.

Wait. I know, what you’re saying: “Who is RF Mogul? I thought MobilSat makes the RVDataSat?”

Right. The RVDataSat 840 and its InstaSat service plans, are only available from MobilSat, which is based in Chesapeake, Virginia. RF Mogul manufactures the mount and makes the satellite dish controller at their facility in Utah. (Can you say, Made In America!) The two companies have a long history of providing mobile and remote satellite based communications solutions for emergency services, the Oil & Gas industry and other commercial uses. They developed the RVDataSat 840 together, as the first consumer oriented solution specifically with RVers in mind.

But there I go digressing again. About that issue…

It turned out to be no big deal. We certainly didn’t need to visit the factory to get it fixed, but we were there. So I dropped by, made the quick and easy repair, got the scoop, and the grand tour.

To top off that full-time RVing nightmare day we had on the way back to Colorado from Oregon, our new dish did not lock on to the satellite within a couple minutes as it usually does. Instead, I heard the dish stop and saw this dreaded error appear on the DataSat Controller screen:

Or something like that. I try to forget these things, and I saw it far too many times on our previous 7+ year old MotoSat dish. Basically it means the azimuth motor on the mount stalled out while turning the dish. Knowing that this can be caused if motor counts are off, I took a breath, calibrated the dish, and searched again. The same thing happened. Once is a fluke, twice is a coincidence, three times is a pattern, so I tried once more. Same thing.

This time, I noticed that the stall occurred at the same point every time—when the dish had reached the end of its 360º± spin. So, being in Salt Lake City, I called RF Mogul directly and got on the phone with the Vice President and design engineer who built our dish. Now that my friends, is service!

Within a couple minutes Ed recognized the issue, and assured me they had fixed it before the first dozen units had shipped. So…what happened!?

Our flipper was stuck. Without getting too technical, the RVDataSat 840 mount has a flipper/switch that will keep the dish from spinning past 365± degrees. Ours was getting stuck so it would hit the stopper instead of flipping on it. So, the motor would stall out trying to spin around that final few degrees.

The fix was simple. It just needed a couple magnets added. Yes, magnets.

And that my friends, is grace of design! The spring that keeps the flipper flipping is magnetic. Instead of a metal spring that can rust and break, Ed designed the spring-loaded flipper with opposing magnets. Brilliant. Ours—and apparently very few other units that might have shipped—may have just been attached too tightly, causing friction to randomly keep it from flipping. By adding two more small magnets to the “spring” and reattaching the flipper unit, it has been flipping properly ever since. And we never encountered any motor overcurrent issues again.

So. If you happen to be one of those few people who received one of the first few RVDataSat 840 units, and found this post searching for an answer to the azimuth motor issue; stop reading and call MobilSat Support. I bet they’ll have RF Mogul send out a new flipper for you. I replaced ours in about five minutes!

So, What about this factory tour?

Since I had Ed’s attention, I asked to look around and take some pictures at the birthplace of our satellite dish and ask a few questions.

My first impression was that the shop was incredibly clean and organized, and that they do an amazing mount of work in such a limited space.

The small team of workers was busy building and testing satellite equipment of all sorts. They make much more than the RVDataSat 840, and they’ve been doing so since they made some of the first commercial mobile satellite units more than 30 years ago.

Being specifically interested in our dish, I got a closer look at its guts on the assembly line. The RVDataSat mount is surprisingly simple, and rock solid. There are no cast parts in the assembly. All aluminum is milled and bolted together, making the whole unit stronger and much easier to service.

I then got a closer look at the DataSat ACU-1 controller, and was seriously overwhelmed with the amount of satellite information Ed dumped on me in the short time I was there. The man knows his stuff!

If you can’t tell by know, I’m pretty thrilled with our investment in the RVDataSat 840. I’m quickly becoming an evangelist for MobilSat, and am honored to have visited the RF Mogul factory, even though I really didn’t have to. I’m just not about to pass up the opportunity to geek out on this kinda stuff! 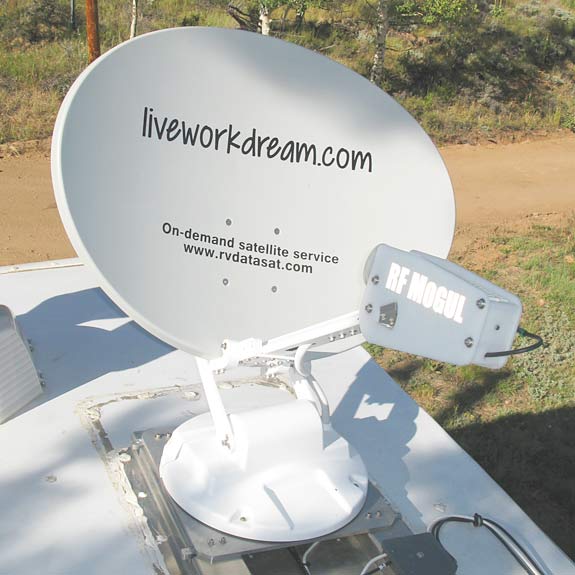