If you ever have the chance to take a short detour for some vaguely interesting attraction while traveling the back roads in some remote part of America, take it. You never know when you might be that way again, and if you pass it up, you’ll never know what you missed. This was the case for us in Marble, Colorado approximately 6 miles off highway 133 on our way from the North Fork Valley to Denver. 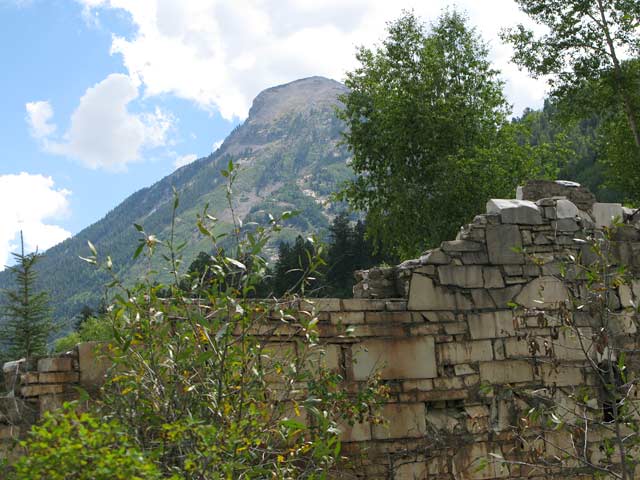 A trip to the historic Yule Marble Quarry site is especially a must for anyone who likes seeing heavy equipment in action. We pulled up just in time to watch a crew load and unload 15+ ton blocks of marble using a Komatsu WA600 Wheel Loader. Translation: One big frackin’ forklift!

If you’re not that interested in manly machines—talk to the woman apparently in charge of the loading area—don’t worry, Marble still has much to offer in terms of historical interest. 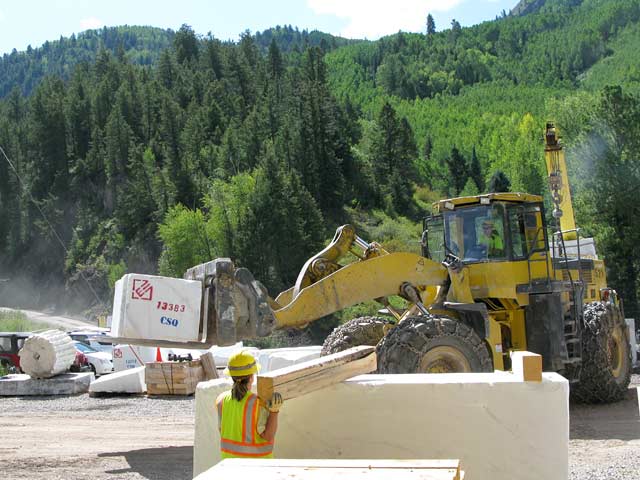 The marble deposits discovered here in the late 1800s resulted in development of the town and quarry site which has been the source of marble for the Lincoln Memorial, New York’s Metropolitan Museum of Art, and San Francisco City Hall among many other architectural masterpieces throughout the world. Today an Italian company operates the quarry, in this small Colorado town of only 131 residents, shipping most of the massive blocks overseas to produce marble tile for the Saudi Arabian market. 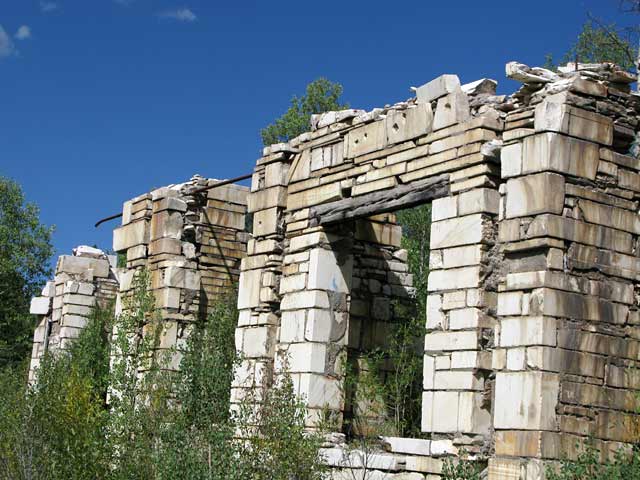 Tours of the quarry itself are no longer available, but the chambers where marble has been extracted for hundreds of years are said to be so massive they have their own weather systems. A short self-guided walking tour of the old marble mill site, however, is well worth the visit.

With the quarry operating year round, there’s a good chance you’ll catch activity in the loading area. In our short visit we watched them load one block onto a flatbed semi truck (yes, just one), and offload the block in the video above. As we left another truck was coming down the mountain with another load. 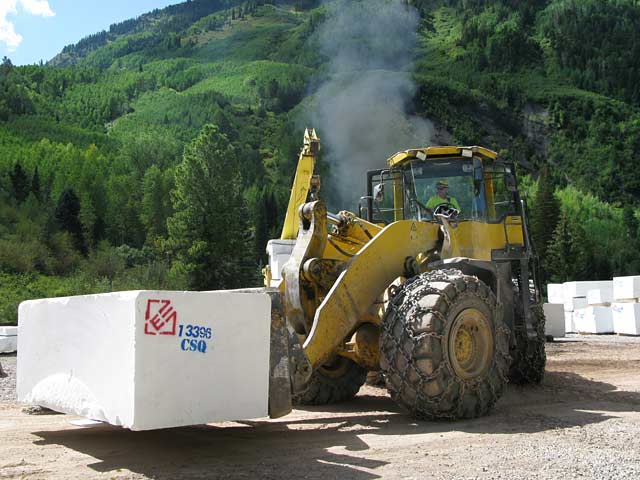 Fair Warning: If approaching Marble on 133 from the south, don’t be fooled by the pass. The last descent is very steep with a gnarly hairpin turn at the bottom, immediately after which you must exit to the right, taking Route 3 into town. Another important warning; pay attention to the signs! Marble is a very small town with narrow roads. Turn right toward the Quarry Site on Third street and immediately park in the gravel area to your right. Do not proceed over the bridge! That road leads up to the quarry itself. 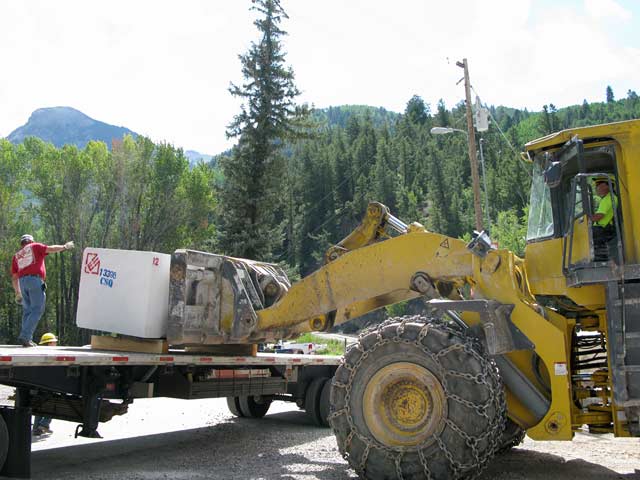 As we were about to leave, a car pulling a pop-up trailer neglected to heed the many large red and yellow “Active Loading Area” signs and proceeded to approach the bridge as a large truck was coming down the hill with another big block of Yule Marble. The workers we met at the site are nice and knowledgeable, and I’m sure they are used to dealing with visitors, but let them do their job. 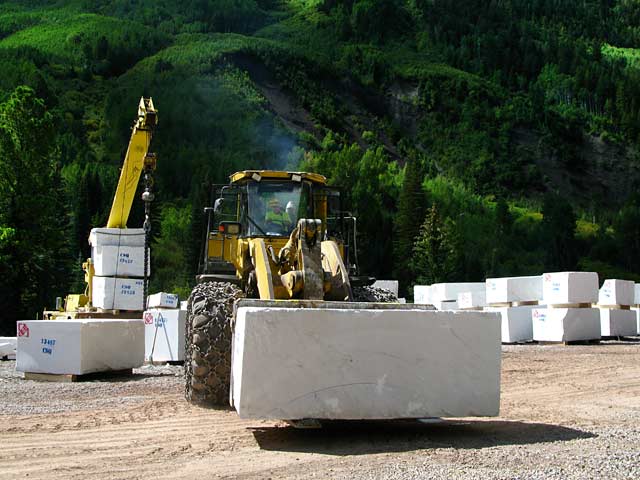 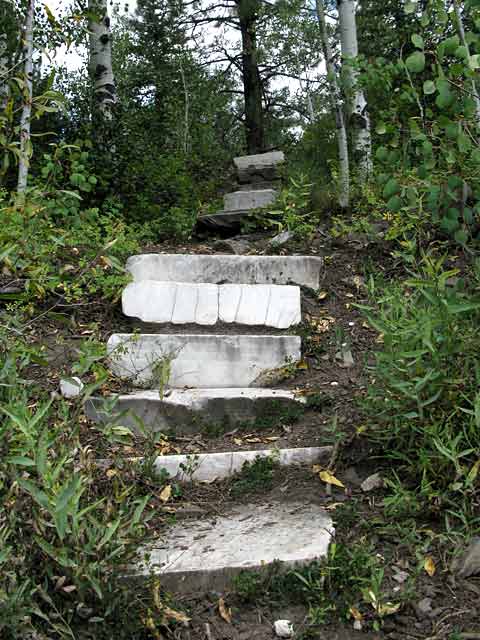 After seeing the modern marvel of heavy machinery manipulating massive blocks of marble, walking the steps of the old mill site was, well, marvelous in itself. It makes one wonder just how they did it back then, when it still seems to be such a challenge today.

There is a Marble museum in town which we missed since we had our trailer and were on a schedule to get to Indian Hot Springs for a well deserved soak after workamping all summer. But who needs a museum anyway, after a front row view of such diesel powered industrial equipment at work? 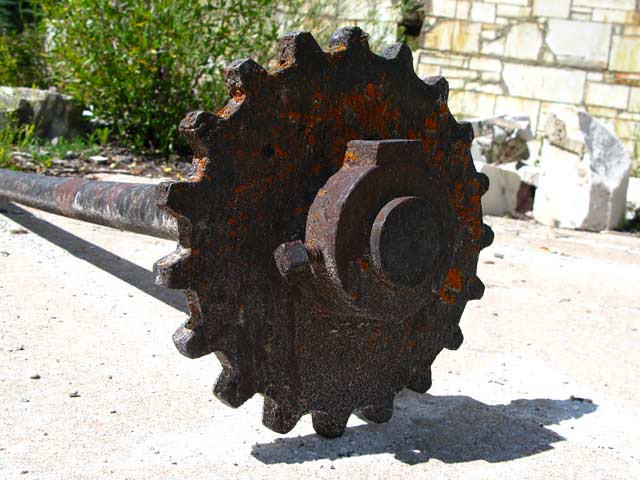