When you travel the Blue Highways of America like we do, you’ll find dozens of interesting highway monuments and less well-known historic sites dedicated to locally significant historic events or people. As long as you can pull over the rig with enough time to avoid a jacknife, many of these obscure and free historic places are well worth the stop, like the Sand Creek Massacre National Historic Site in eastern Colorado. 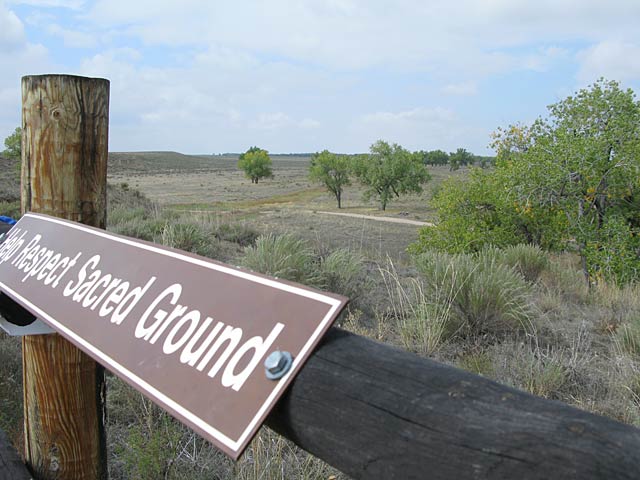 On our way to Kansas, we took a small dirt-road detour to experience this off-the-beaten-path site. Only a decade or so old, this sacred spot recalls one of Colorado’s most shameful events; the ruthless atrocities committed by the Colorado territory militia against peaceful Cheyenne and Arapaho Indians led by Chiefs Black Kettle, White Antelope, and Left Hand, on November 29, 1864.

It was on this spot that Colonel John Chivington and his troops committed barbaric, murderous atrocities on nearly 150 peaceful Indians, most of which were women and children left behind while the men were off hunting.

Underneath the banner of a white peace flag flying high over the encampment, Chivington ordered his men to assault and fire on these peaceful Indians who had recently been reassured by the U.S. government that they would not be harmed by U.S. troops.

Some of Chivington’s men defied orders, and fired bullets into the air instead of onto the people who were seeking shelter in the creek. Later in a testimonial to the U.S. Congress, one of the troops stated:

I saw the bodies of those lying there cut all to pieces, worse mutilated than any I ever saw before; the women cut all to pieces … With knives; scalped; their brains knocked out; children two or three months old; all ages lying there, from sucking infants up to warriors … By whom were they mutilated? By the United States troops …
— Congressional Testimony of Mr. John S. Smith, 1865[19]

Jim and I were brought to tears as we read firsthand accounts of testimonials on display. There, among the wide open skies and prairie, we were both caught off-guard by details of the brutality committed in the surrounding countryside. I can’t think of a single historic place that took our breath away with such force. The powerful, lingering memory of that horrific day is still clearly felt as you walk the trail leading to the bluff that overlooks Sand Creek.

One of the best parts about this lifestyle is taking a few minutes out of your life for some unexpected detours that can leave lasting impressions about history and society. I wouldn’t trade it for anything.