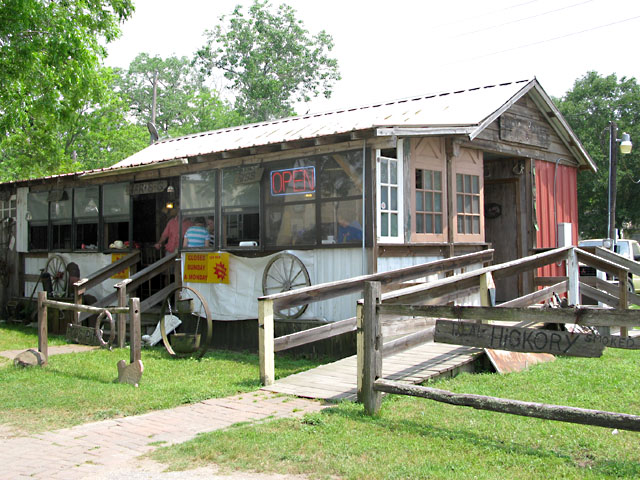 There is simply not enough time to enjoy all the barbecue goodness Texas has to offer. From the big cities and fast highways to every sleepy little town and winding FM (Farm to Market) road, the savory smell of smoking meat can be enjoyed as it radiates from rickety shacks and strip malls alike. It even overpowers the ever present aroma of Texas oil country.

Last year in Luckenbach, René promised me a dinner at Hondo’s in Fredericksburg. This year, she kept her promise. Hondo’s is an informal, self-serve restaurant with a menu sure to please any discriminating taste, and yes, they have BBQ. Place your order and have a seat on the shaded patio sipping a cool tea until your pager blinks. We might have sat inside and stuck around for the live Music if we weren’t taking a break from the Hat Festival. 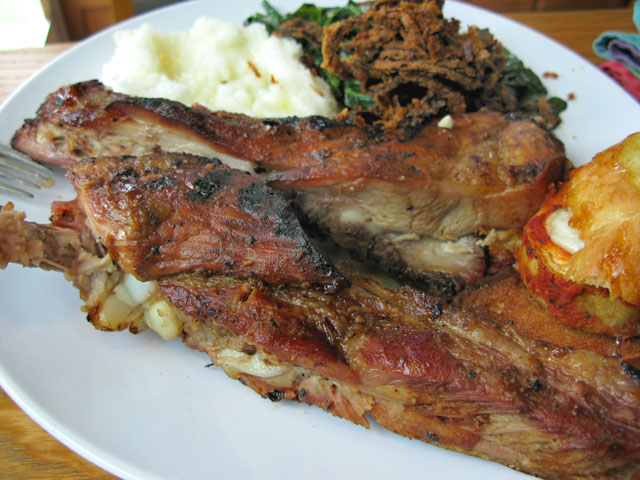 After seriously considering the brisket, I opted for the special – “a generous portion of whatever David’s been smokin’ all day” – and was informed that the 2 lbs of ribs came just like that, just ribs. So I added some fried onion strings, and was reassured by a sincere “Mmmmmm…” from the woman taking our order.

I traded a bunch of crispy strings for for some of René’s succulent grilled Mahi Mahi salad. There was no way I could eat so many ribs without some fresh greens. And fresh they were. 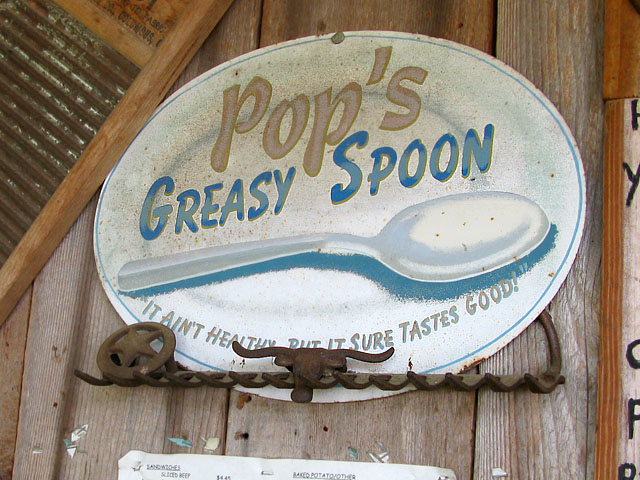 I would have certainly hurt myself even trying to finish the big ol’ basket of ribs, so leftovers were in order. With some grits and greens topped with remaining onion strings, I got tasty BBQ two days in a row – bonus!

After passing far too many BBQ joints – with names like Fat Boy’s and Bubba’s BBQ – over the next couple weeks, we found another gastronomical treasure at Pop’s Pit in Brookshire, Texas. Pop’s is old school BBQ at it’s best, but these days you’ll even find traditional places like Pop’s Pit on Facebook! 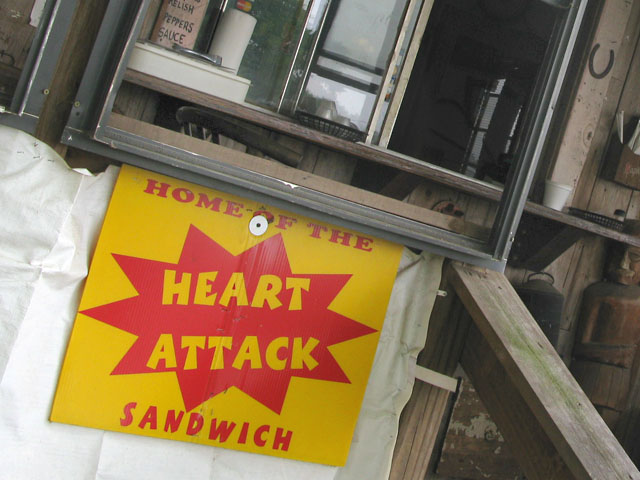 Pop’s Pit is home of the Heart Attack sandwich, chopped beef and sausage. But after ordering the ribs, I spotted the brisket sitting on the counter. It comes sliced or chopped, on a bun or in a bowl, and it looked – and smelled – too good to pass up. I opted for the sliced beef sandwich, and got a funny look when clarifying our side order of beans and slaw. After all, René had just ordered the Suicide Spud wit the same sides, to split. “She’s gonna eat all that?” the woman asked. “No” I said with a grin, we were splitting the side dishes. “I’s gonna say…” was her only reply as she turned to shout our order to whom I presume had to be Pop. 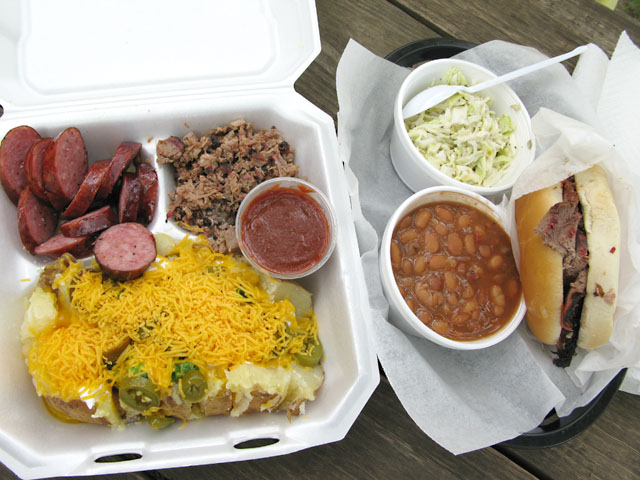 The woman’s reaction was clearly understandable once our food was ready in the walk up window. Another bonus for me: the sausage and chopped beef that comes with the monster baked potato smothered in melted butter and sour cream. The beef was tender and tasty, but leftovers were once again in order. The smoked sausage scrambled up with eggs the next day made for another one of those memorable all day breakfasts. 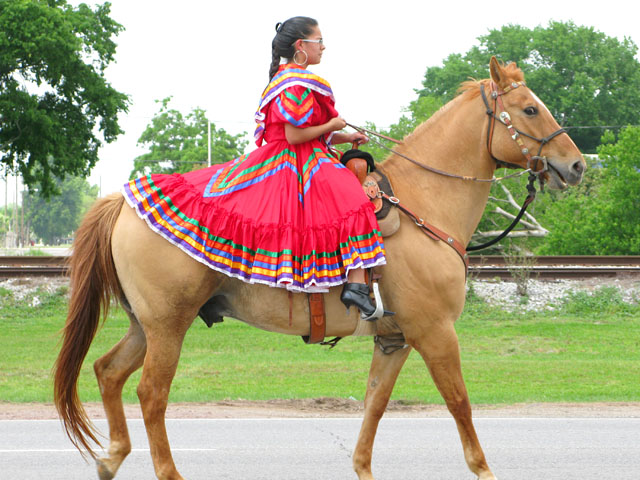 The final bonus at Pop’s was that we got dinner and a show! Shortly after sitting down at the shaded picnic table with our mess ‘o food, police cars started zipping by with sirens blaring. Then they went the other way, and back again. A parade was about to begin. As I sat licking my fingers, feeling satisfied, and finishing René’s iced tea, she ran off with the camera to capture the colorful Cinco De Mayo celebration passing by.

As paramedics brought up the rear, I felt safe knowing help was nearby if I decided to eat just one more piece of sausage. Allen’s, here we come!

3 thoughts on “So much BBQ. Such little time.”