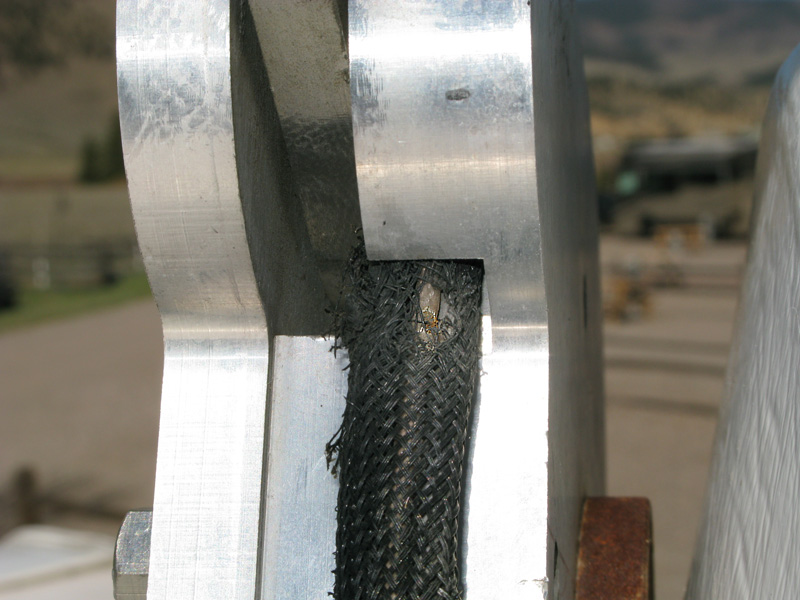 The day before we were set to arrive at Vickers Ranch to settle in for our summer workamping jobs, our Datastorm F2 satellite internet dish stopped working. It refused to lock onto our satellite (91W).

We’ve experienced intermittent trouble and lengthy searches before getting online in the past. But this time it wouldn’t lock on at all. The dish went up, stopped at every bird in the sky attempting to identify the signal, only to continue searching. After calling MotoSat for help – and sending them a few photos of what we assumed was the problem – they determined that an “in house” repair was required to fix the issue. 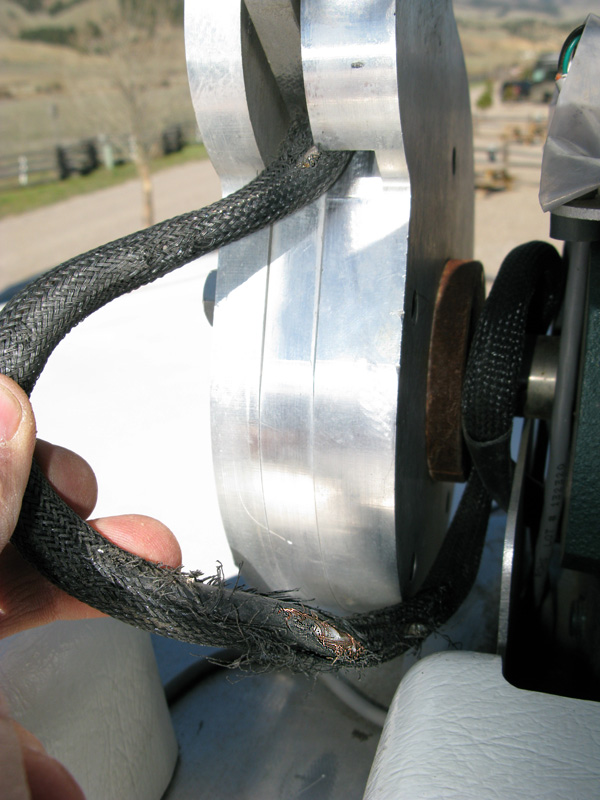 With our online lifestyle, there was no way we could make it a week – let alone through the summer – without a serious hack job, and a way to find our satellite. So, we took a 900 mile round-trip detour to Salt Lake City for a factory repair at their headquarters.

The only other option was to remove the entire dish mount ourselves, get it off our roof somehow, and find a freight company to get it from Creede, CO to Salt Lake City for the repair. Not to mention re-installation. It was quicker and cheaper to just drive it there. And the trip turned out to be fun. Or at least interesting.

The vital receive cable that wraps around the dish assembly to send the modem data had gotten pinched and copper was exposed. Copper that was picking up interference from every cell phone, microwave and radio station in the area. Thus the confusion when trying to establish a connection with our satellite.

While I personally feel there must be a better way to route this cable than through the hinge that that eventually caused its demise, the point is it needed to be fixed. But I’m no satellite dish engineer. And we weren’t about to do it ourselves.

René couldn’t believe the repair had to be done there. From southern Colorado, Salt Lake City is about an 8 hour drive, and hundreds of dollars in fuel. She protested, and demanded that I call our RV satellite installer to know why we couldn’t do the repair ourselves. He said that he could probably do it, but MotoSat explained that certain issues with the dish mount require what they like to call an “in-house” repair. This means the entire unit must return to their factory for them to fix it. Any attempt for us to do so would void what remains of our warranty (MotoSat gives you one year on labor, three years on parts).

MotoSat did say we could remove the 200 pound F2, palletize it and ship it to them. But considering that we’d need to rent a lift or hire someone to help us remove it, combined with the packaging and freight costs, doing so would probably cost more than we’d spend on diesel to get to the factory. It would certainly take a lot longer.

Anyone considering satellite internet should keep these operating costs in mind. Like any technology system, satellite internet dishes are not bulletproof. And MotoSat does not have field techs who go on site and fix problems. Initial diagnosis must be done by a fairly capable, tech savvy end user, with help from phone techs. And Datastorm dish repairs require you to really know what you’re doing, or to know someone who does, or to go to the factory. 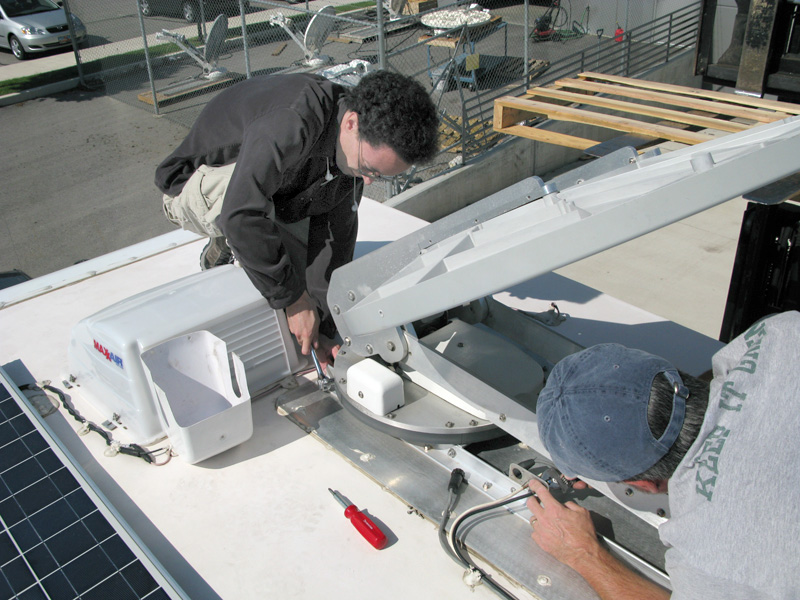 When we arrived at the impressive MotoSat headquarters, it was a pleasant surprise to be greeted by Mike, a tech support guy we’d spoken with before. Meeting our phone support rep in person was such a novel concept.

Service from Mike and the MotoSat support team has always been outstanding. The first couple times they helped us out, we thought “wow, they’ve got their American accents down real good!” Well, turns out the reason why is because they are not employed by some call center in Dubai. They were talking to us live from a cubicle in Utah.

Before the repair team got started, Mike gave us a tour of their facility. We walked through tech support land, eavesdropping on conversations. It felt odd to be on the other side of the phone line. And it conjured up memories of my previous cubicle life in the tech industry.

We have to admit that we’ve always thought phone support hours were ridiculous (8am to 5pm weekdays). After all, we’re used to 24/7 support from Banglagore. But the small price we pay for shorter hours, means that guys like Mike can work decent hours, allowing him to have a life outside of the office, and ultimately treat us nicely on the phone. And isn’t that something we all want? 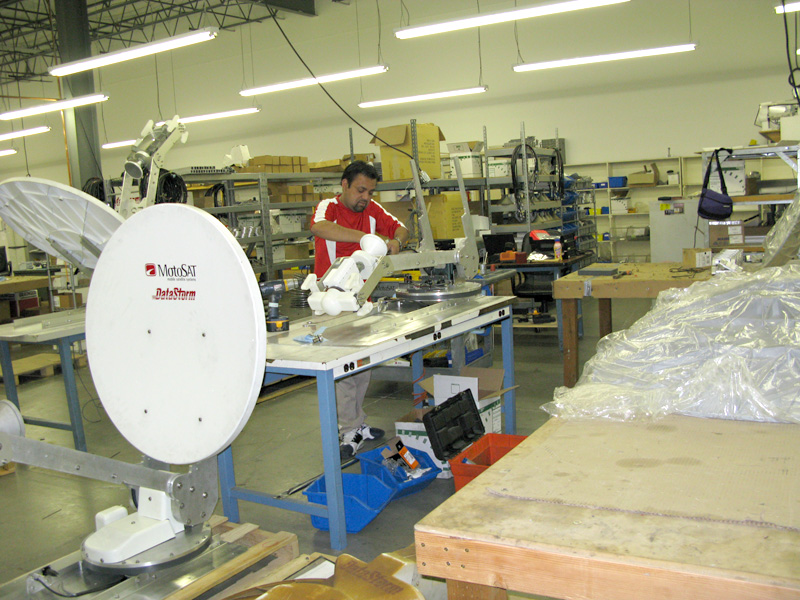 Then we toured the factory. Nearly all of MotoSat’s operations are done in house. From design to assembly, to repairs, to accounting – everything. They mill their own metal parts, and all the plastic forming happens next door. Only certain electronic components are manufactured oversees. Assembly and testing – and in our case, repairs – are all done under one roof. Or in our case, out back.

How refreshing it is to see a large, successful business like MotoSat keeping their operations as a cohesive unit, in one geographic area within the U.S.

Once the MotoSat team began working on our problem, it took them a total of about 8 hours to remove our dish, route new wiring through it, and complete the re-installation; billed as a re-wrap. That’s eight billable labor hours that we would’ve had to pay for, if we didn’t own an end-to-end lifetime warranty on everything bolted to our RV.

When we asked Mike if he would help us send their repair bill to our warranty company so they could get paid by our insurance and not by us. He gladly obliged, and helped us get the right information to them, even calling the company for us to file the claim. 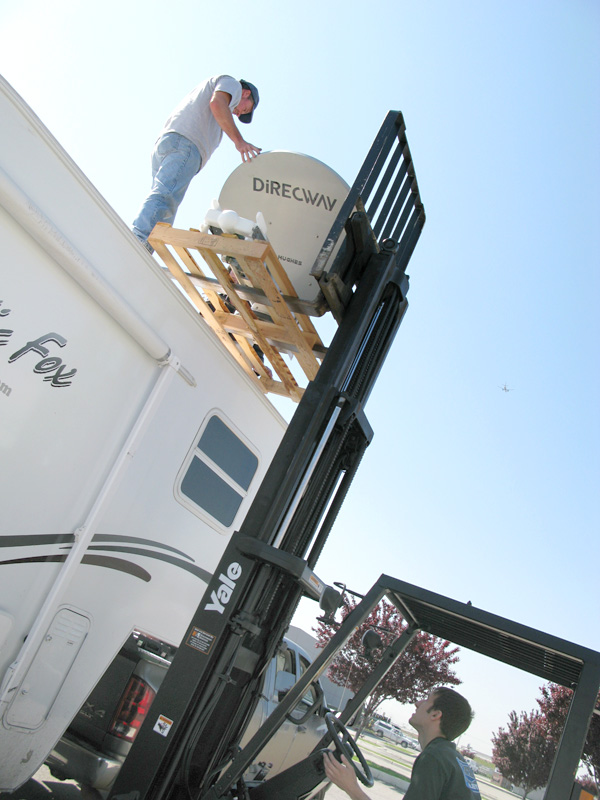 By 5:20 p.m., Mike and the MotoSat crew had us back on the road and headed south to Colorado for the summer. Yes, he stayed late on a Friday to confirm things were working and file our necessary insurance paperwork for us. Later, their accounting department pleasantly helped us finalize financial loose ends with the insurance company. Our dish is now working great, and we are once again able to conduct our work from the woods. Or wherever we may be.

It’s been a while since we’ve worked so closely on a major problem with a technology business. What a nice surprise to know that a communications meltdown like the one we had can be resolved so quickly, without frustration, by good natured employees who actually seem to like their jobs. Even if we do have to drive there to get the job done.

By the smiles on the faces of their employees, MotoSat must be doing something right in their business operations. And more U.S. tech companies could definitely take a lesson from them.

3 thoughts on “MotoSat: Keeping it local in Salt Lake City”