I hate writing about stuff that happened weeks ago. But then I guess you would never know, if I didn’t tell you! Anyway … 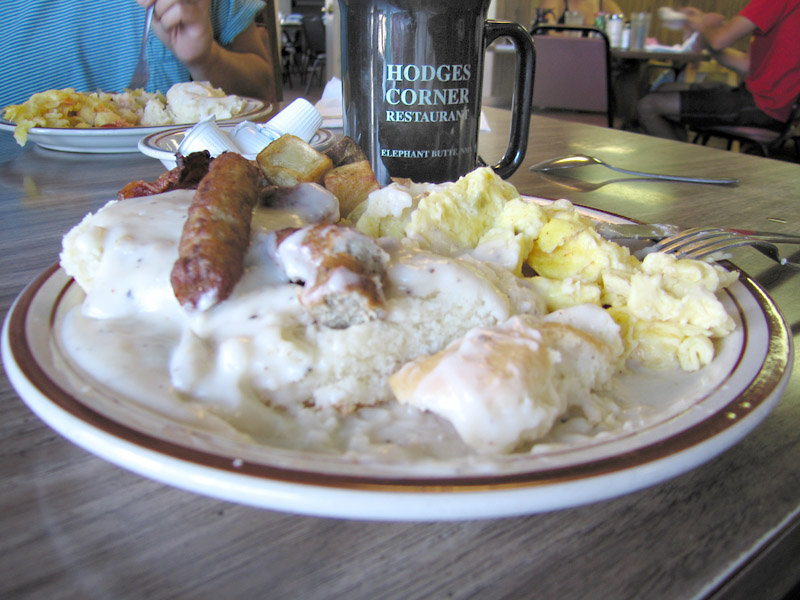 I hadn’t reviewed any biscuits and gravy for a long time.

So I was especially pleased to discover Hodges Corner Restaurant serves up a mean breakfast buffet on Sunday morning.

I was even more pleased – and even more surprised – that René actually suggested we stop for breakfast on our 12 mile bicycle ride from Riverbend Hot Springs in Truth or Consequences up to Elephant Butte. It’s sure a good thing the second six miles were downhill!

The ride from T or C to Elephant Butte isn’t far. It’s only about six miles or so. But it’s nearly all uphill. So when we got to the top, overlooking the lake, and René suggested we get a bite to eat, I was thinking a muffin and coffee somewhere would do the trick. Maybe a banana. Usually all I get is a Clif bar. If anything. 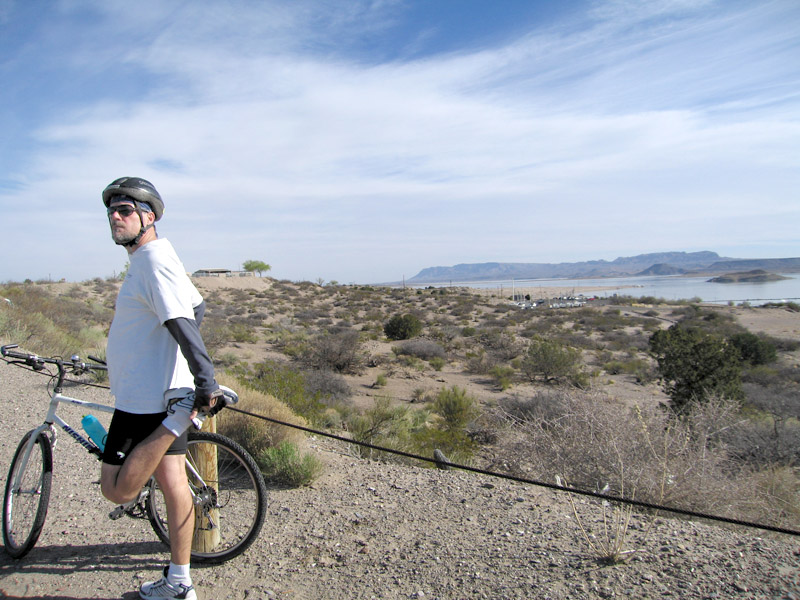 But the first open place we found, was Hodges Corner Restaurant. And the parking lot was full. Perhaps because this was indeed the only open place. Regardless, when we saw the sign for the $6.49 buffet, we set aside any notion of the ride back and promptly sat down.

The coffee was good, in stereotypical diner coffee fashion, and brought promptly. A quick walk-by of the buffet table confirmed our decision to leave our menus closed was the right one. There was an ample variety of items, and more thought had obviously been put into the food preparation than its presentation. This was a no frills kinda place. But then I haven’t been anywhere in the area that wasn’t.

I opted for the biscuits and gravy, of course. Anyplace that can keep their gravy both appealing and tasty after it has sat in a steam table for any more than a few minutes, has my vote. And Hodges has mine. A couple extra sausage, and the gravy was just right. That was no problem considering the variety of breakfast meats available.

I had my choice of scrambled egg dishes, so I chose both. And the home fries were just calling my name. The biscuits were delightful. Warm and fluffy. On my second round, I just had to taste the pancakes. And that’s all I did. They couldn’t compete with my first choice.

René got adventurous and opted for some more local fare. She dared to put the green chile sauce on her eggs, only to discover it was full of small beefy bits. Any vegetarian likely knows how her face curled up after her first bite. The sauce wasn’t bad. It tasted authentic. But it was nothing like my all American meal.

Rather than hurt ourselves, we quit while we were ahead. The service was attentive and polite. The food was good and plenty. And the price was right. But we had to ride back, which wasn’t all that bad. Considering we coasted most the way.