Unlike some things, the time we spent in Luckenbach was truly amazing. Luck isn’t exactly on the beaten path, but we were heading through the general area. We thought if it was convenient, we’d check out the place where Willie held his cookouts and Waylon made famous in the song.

Well we found it. And we loved it. Even more so when we discovered they offered dry camping for just $15.00 a night. Even more still when the kind gentleman in the store said there would be some informal pickin’ going on in the bar that night. We pulled into the huge parking field behind the dance hall and had the place to ourselves. 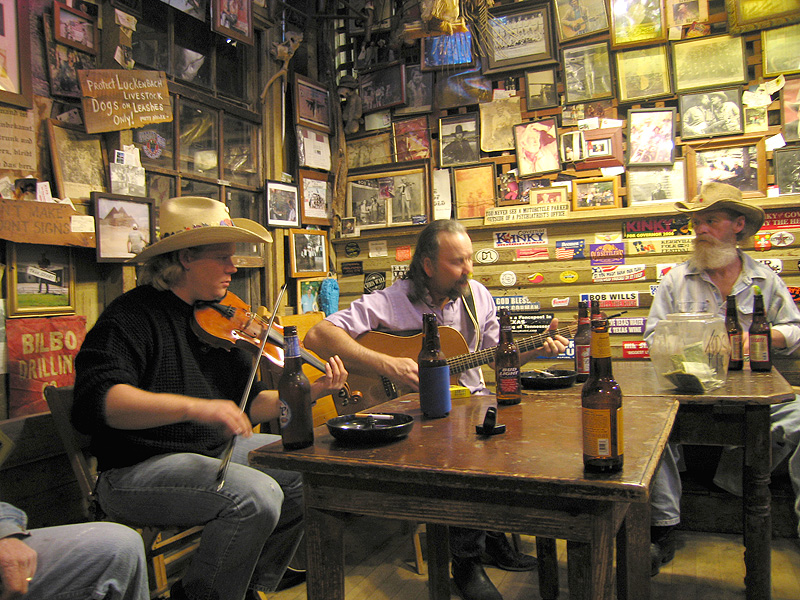 Turns out there is music every night in Luckenbach. The setting is very intimate and the acoustics are incredible. If there’s a dozen people in the place you’re bumping elbows. But everyone makes you feel welcome. It’s true that everybody’s somebody in Luckenbach.

We didn’t want to intrude with our camera Monday night. But trust me, Jimmy Lee and Danny Terry put on an incredible show for just a couple guys pickin and a grinnin’ … If you can just get Bobby Wayne Burg to shut up, you might be able to thoroughly enjoy it! Just kidding there – Bobby’s family used to own Luckenbach where his aunt Marge was Sheriff and bartender for 33 years. So he deserves to be as loud as he wants. Unlike the obnoxious drunk blonde who pestered Jimmy to play some Billy Ray Cyrus, drawing the night to a close early.

We felt so at home and had such a good time that we decided to stay another night in Luckenbach. Everyone told us we just had to see Dale Mayfield and friends who were performing the Tuesday night. Friends included Hal on harmonica and flute, Levi Darr with his amazing fiddle. I didn’t catch the name of the fellow playing his homemade banjo. What a performance they put on indeed …

It is said that someone once told Hondo that Luckenbach is at the end of the world, or something like that. Hondo simply replied that Luckenbach was the center of the universe. It sure feels that way. Before we left, Danny told us that if we return we’d be sure to meet someone from where we came from. We already had. On Monday night we ran into a couple from Petaluma where I grew up. On Tuesday we met a guy from Redding, just over the hill from Eureka, CA where we began this journey.