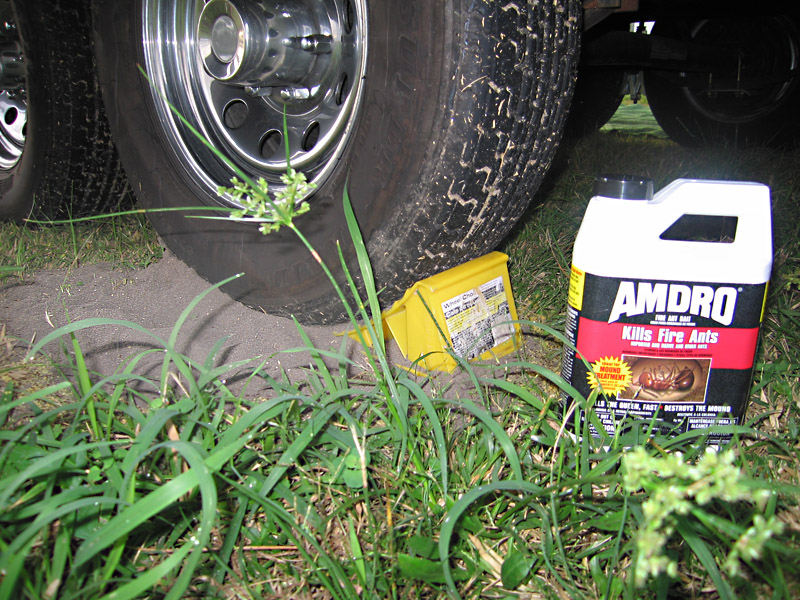 But there’s one unique aspect of Florida that the tourism guides fail to mention. Bugs! Mean bugs. Flying bugs. Stinging bugs. You name it, this state has some of the nastiest insects that we’ve encountered on our entire trip. Pest control is big business in this state, but as usual, nature bats last.

The day we arrived at the farm, Jerry stepped in a pile of ants. It was a matter of seconds before they were swarming up his leg. Then, two days later, I noticed a mound around one set of our RV tires. That was enough to totally freak me out.

I asked the farmer what to do about them. “Can’t do much. You can get Amdro and they’ll go away from that spot, but they’ll just relocate to another one. You really can’t win.”

Amdro isn’t organic, but since we aren’t camped near the veggie fields, the farmer didn’t care if we used it. I ran to Lowes and picked up a gallon of this granule control. The ants disappeared from the tire mound in a day. But then, today, one week later, I found a swarming nest of ants inside the crate our generator was sitting in. What fun it was trying to pull the generator out while they swarmed up my hands.

These fire ants are vicious, and move quickly. Their bite is almost as bad as a bee sting. Some people say they serve a purpose, but I don’t know why they would be put on this earth, other than for an occasional laugh.

Be warned if you RV here. Keep a watch around your RV, don’t leave things on the ground for too long, and check under your astroturf tarp often.

Floridians like to call them “Palmetto Bugs.” Sounds kinda pretty, doesn’t it? Well, this is just another name for an old fashioned nasty, fat cucaracha, but worse. The best part: these damn things fly! They’ll fold down as flat as a sheet of paper to get into your rig. We’ve even found one in the freezer.

These aren’t like regular roaches that scatter as soon as you turn on the lights. Nature’s sick joke on us is that they’re extremely nervy; they’re harder to kill, are attracted to light, and will jump right onto your head in a flash.

I’ve been a meticulous housekeeper since moving into the rig, but since discovering the flying cockroaches, I’ve kicked up my cleaning streak two notches, and now no kitchen garbage or floor debris is allowed to remain in the rig overnight. So far, so good.

If this is winter, I’d really hate to see what summer is like. Florida mosquitoes will buzz around even when the temperature warms up to 70. There are swarms of them, and my body has gotten so bitten up, I look like a leprosy case. I’ve always been a mosquito magnet, and since arriving here, their attraction to me has been even stronger. 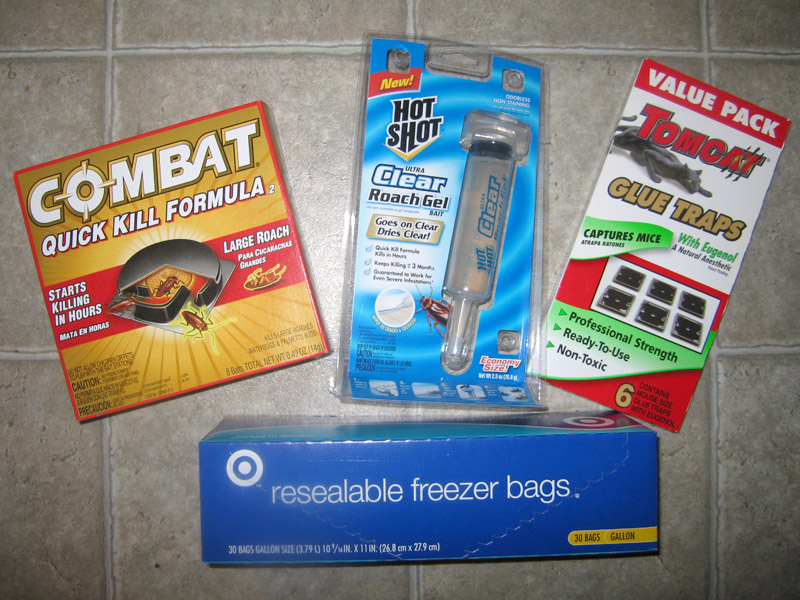 In our first two weeks here, I’ve spent money on pest control products. The farmer thinks it’s funny. I realize that my attempts to secure our rig from these predators is probably futile, but I’ll be damned if I’m going to live in such a small space and live in fear of these useless creatures! I’ve applied all of my products, and all unrefrigerated, open bags of food are going into ziplocs. I won’t give up without a fight, even if it means using nasty, caustic chemicals! Screw green living, this means war!