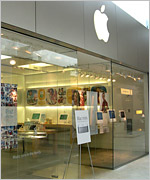 By the time I was about to write about dropping off my Powerbook at the Charlotte Apple Store for repairs, they had already called to say it was ready to be picked up. This came as a pleasant surprise considering they said it would take five to seven days to be fixed at the service center in Texas.

So our stay in Asheville – a few hours away, in the Smoky Mountain foothills – was cut a bit short, but the couple days we did have there was plenty to get a feel for the area.

This little wrench in the works also gave us time to realize we never care to live our lives along an interstate corridor. As we criss-crossed North Carolina, the incredible population density and mass consumption of this country became remarkably clear.

It’s a shame that such awesome beauty of the Blue Ridge Mountains is continuously being replaced with developments baring the names of animals they’ve displaced. Gated communities with names like Red Wolf Run are aggressively being marketed by firms with names like Peregrine Properties with promises of nature’s splendor in your backyard.

Thanks to Tiger Woods’ new golf course, and Nicholas’ before, as well as land aplenty which used to be affordable; now “Great Starter Homes” can be had for just $569,000! Or you can find the perfect site – on less than an acre – to build your dream home sarting in the low $180s. Or why not settle for a “Manor Home Condominium” from the high $400s. Now that is one expensive oxymoron. Please excuse me while I wretch.

At the same time, the U.S. Forest Service is developing a map titled National Forests on the Edge that illustrates development pressures on America’s national forests and grasslands. Note the red area in Western NC. (I read about it in the Mountain Xpress Green Scene column.)

The splendor of all those McMansion backyards won’t last long if such developments keep bordering it, causing harm from native species displacement and ground polution to invasive species introduction and light polution.

Driving by strip mall after housing development, after strip mall after construction site, it started to sink in. But when I updated our RV road trip route map, it struck me hard: There are just too many people in this country. Or rather, the population of this country is packed together too close for my comfort, simply because they just have to be near it all. Even when they move to regions known for getting away from it all. 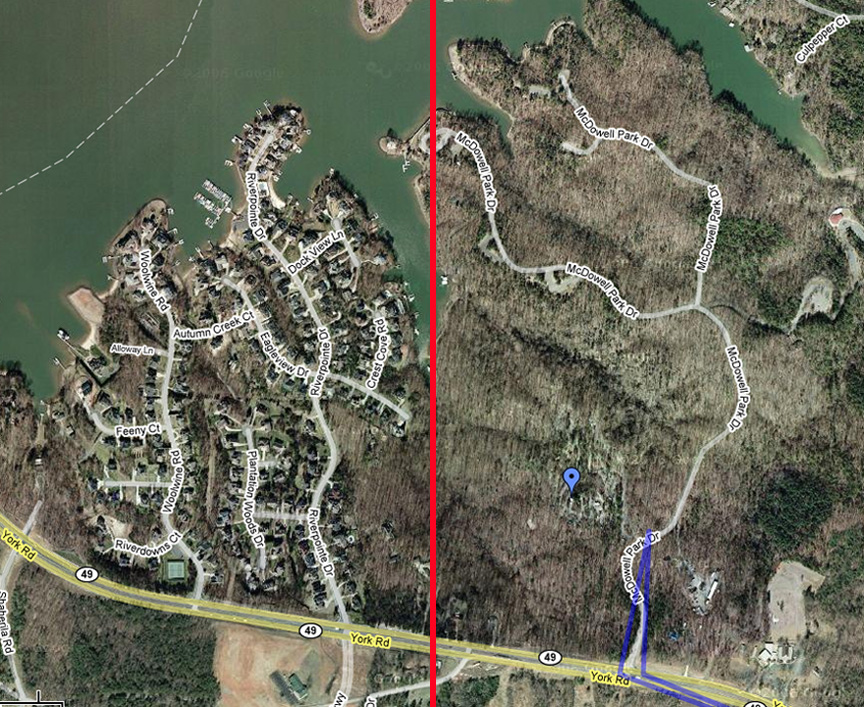 The McDowell Nature Preserve (right) is an incredible County Park. Their Urban Escape tagline says it all. It has acres of trails, and great camping facilities. But it sits in the midst of urban sprawl. Properties of equal size on either side are as dense with development as the preserve is dense with trees. But I digress.

What exactly caused us to drive to Durham, then to Charlotte, then to Asheville and back to Charlotte? In technical terms, my Mac took a crap. The screen on trusty Powerbook G4 that has served me well through the past few years of intense graphic production went dark one day. Over the course of the next few days, the issue got worse.

After one long call to Applecare Support, and numerous attempts to resolve software issues, I was told “it may be the hardware” … thank goodness for my extended warranty! Off to Durham we went from Blacksburg, VA to visit the closest Apple Store, only to discover the machine would have to be shipped to Texas for repairs. Thinking we could pick the machine up at another Apple Store, we went out to look at a map and find one that would be on our way, so we could get back on our way.

Fair Warning: Apple will only ship a service repair back to the store that shipped it out. Just take a look at the camp site we had in an “RV Park” near Durham and you’ll see why we only wanted to stay one night.

On to Charlotte we went. Thinking it might be at least seven days until we had to return, we wished my Mac well and headed to check out Asheville. We spent one full day doing laundry and searching for some local produce at one of the many co-ops. After a nice run along the Riverlink greenbelt – bordered by the quiet French Broad River on one side and noisy Interstate 240 on the other – I received th call saying my Mac was ready. The next morning we headed back to Charlotte, hoping the whole way that I wouldn’t need to spend hours at the Apple Store re-installing software and restoring my data.

Good thoughts do bring good things. My Mac has a new brain and everything is just as I left it. They replaced the main logic board and didn’t need to erase any of my files. Best of all, this $620 repair didn’t cost me a thing. Except for all the fuel we spent driving back and forth across the state because of it.