About 4 states ago, I whined about how I was stunned find out that people in North Dakota didn’t have fresh local lettuce all year long. Silly, spoiled native Californian. Getting out and into the real U.S. has opened my eyes.

As a lacto-ovo vegetarian since 1989, I always tried to live by the creed “Eat / Buy / Act Locally.” And when living in California, abiding by it was easy. I never gave much thought to those organic hearts of Romaine I’d buy in December. Even though I was paying as much as $3.00 a bunch, the lettuce was organic, and it was “local” because it grew in my own state, so it didn’t travel that far. During summer, as I bought salad greens at the Farmer’s Market each week, I was mentally adding up my bonus karma points. Score! How much more local and hippy dippy could I get? My, did I feel righteous at the checkout line!

But lately while listening to the Barbara Kingsolver audio book, Animal, Vegetable, Miracle I’ve realized that I’ve only scratched the surface of the living local creed, and I’m learning what it really takes to walk the local talk. I’m discovering more than I ever thought possible about how my food choices — even if they are organic and meat free — affect so many, and so much of our world.

Today we stopped at a tiny grocery / gas / sporting goods store in Meredith, Michigan. We’re out of lettuce, so I asked if they had some. They sure did. Iceburg lettuce. I took it out of the cooler to buy it. Then Jim and I saw the label; “Packaged in Salinas, CA.” Salinas! Worse than the zero nutrients in iceburg, was the knowledge of how much oil it took to get that wilted vegetable to the cooler shelf. I put it back, and rather than feel deprived, I instead went back into our refrigerator to make the most of seasonal vegetables we had in the fridge.

We had a healthy, gourmet Asian dinner with Japaneese eggplant and cabbage I bought from a farmer in Wisconsin, a bell pepper from our friends Sherry and Dave, snow peas (not local) that I couldn’t live without from a supermarket, and glass noodles (not local). We used Hoisin Sauce, obviously not local. But it was a 50/50 meal. The point is, to try and eat locally as much as possible. If made into a habit, a bunch of little steps can bring about monumental changes.

Before the Kingsolver book I didn’t really understand the Vegetannual — the natural order of when and what vegetables grow throughout the year. Some wannabe farmer I am. I was raised on a global food economy that allowed me to buy what produce I wanted, whenever I wanted it. And even if that New Zealand Kiwi that I bought in July was bland and unripened, I could have it if I wanted it. Kingsolver asks; what’s the point, if this fruit doesn’t even come close to what it’s really supposed to taste like in all its glory? 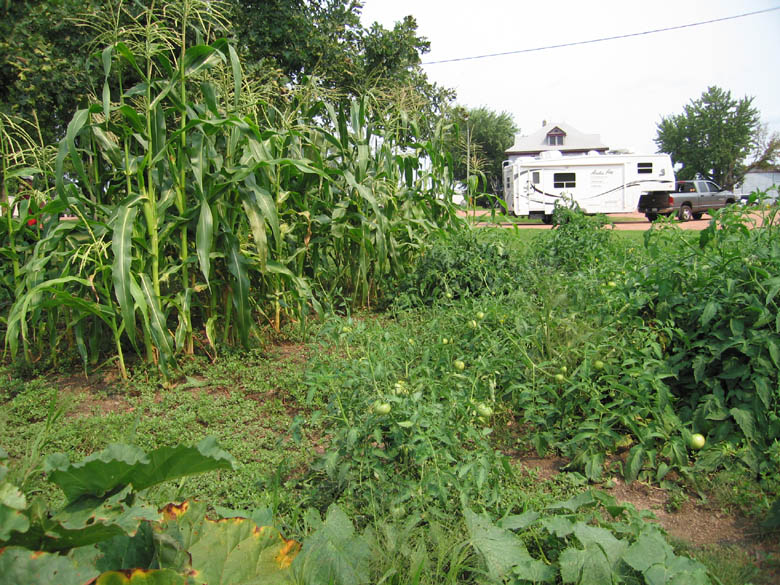 This book, however, has taught me to respect the seasons for the vegetables that they bring to our table, to celebrate each one as they abundantly appear, know and appreciate their true flavors when they’re at their peak (what does an in season Kiwi actually taste like?), and honor their time frame.

Buy purchasing out of season vegetables from faraway places, I’m going against the natural order of things, and contributing to environmental destruction too.

A quick way to improve food-related fuel economy would be to buy a quart of motor oil and drink it. More palatable options are available. If every U.S. citizen ate just one meal a week (any meal) composed of locally and organically raised meats and produce, we would reduce our country’s oil consumption by over 1.1 million barrels of oil every week. That’s not gallons, but barrels. Small changes in buying habits can make big differences. Becoming a less energy-dependent nation may just need to start with a good breakfast.

Don’t worry, I’m not getting on my soapbox and trying to convert you to a meatless diet (although Jim would say otherwise). What I am saying is that by making some small changes at the grocery stores, you will not only be healthier and more appreciative of seasonal foods, but you’ll also score big karma points for doing your part to help the planet.

So get started. Here are some shop local / food websites you can use to try to find local products:

FoodRoutes – Where Does Your Food Come From?

7 thoughts on “Look Out, Here Come the Localvores”