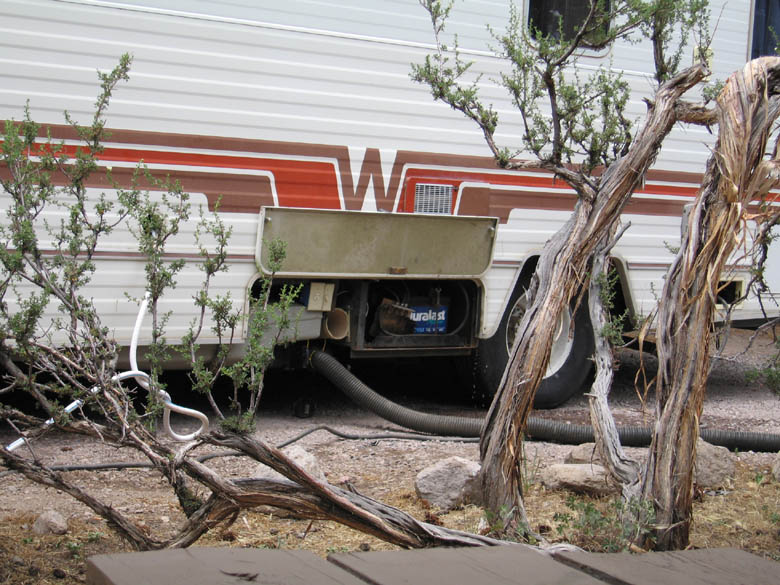 We were told that we could run our AC if we ran our generator. Oh great, sucking up exhaust is loads of fun for people who are sitting outside. But that was moot. Our Honda EU200i Super Quiet Generator is lean and mean and quiet, but the downside is that it won’t run our AC. So we sat. And we baked.

Out of anger and desperation for AC and a pool, we looked into LoLo Mai Springs Resort near Sedona. Their base rate is fine, $33, but for our two guests and their extra vehicle, they wanted us to rent a SECOND site, which would mean a $66 a nite rate! And this isn’t even in Sedona proper!

We stuck it out at the KOA. Saw Sedona and Jerome and had a great time with the parents. But when it came time to leave after 5 days, we couldn’t get out there fast enough. It’s good to be out of Arizona.

In addition to the KOA frustrations, we hadn’t experienced so much racist, xenophobe, Dixie-mentality since….since I don’t know. There are a lot of good people there, but in general, racist and xenophobe T-shirts, hats and Southern flags are proudly displayed in a lot of places in that state. I guess living in Humboldt sheltered us from the rampant anti-immigrant hatred that’s overrunning places like AZ. Scary.