In her recent post about the solar eclipse Rene promised I would share more photos from the amazing totality we experienced, from our front row seats at a Wyoming rest stop.

So here goes. First, I must get something off my chest. I know I’ve said it at least once before, but please: slow the fuck down people!

Within seconds of the totality event ending, there was a mass exodus from the Wyoming rest stop where we enjoyed a leisurely day enjoying the entire solar eclipse – from beginning to end. Within a few minutes, the ambulance waiting quietly all morning took off with sirens blaring. By the time we headed home, traffic on the remote two lane highway was creeping along, bumper to bumper. Then, about a half hour down the road, Rene and I had the privilege of witnessing the only fatality attributed to 2017 solar eclipse traffic in Wyoming.

No, we didn’t see it happen, but we arrived on the scene – and had to drive by very slowly – as the coroner unfurled a body bag and draped the body. Some honor…it gave us a moment though, to give pause on the celestial event we experienced, and how the majority of people who traveled hours to see it, and perhaps months planning their trip, could not wait to get home – even if at the expense of life. But there I digressing again…

I recall walking to school with friends in 1979, as we fiddled with our cardboard sheets to marvel at the magical crescent shapes during the last American total eclipse, because we were not withing the path of totality. I also recall from a few weeks ago being totally fine with watching this one from our deck and thinking, 97% is just fine!

Not. I’m so glad we made the 3 hour drive to experience totality – even if the drive home was 6+ hours, with more than a few drivers thinking they were invincible (and apparently very special), choosing to pass everyone in the oncoming lane. And at least one that, well, never mind.

It lasted less than two minutes.

So much to take in, in such little time. Stars in the sky, the glowing horizon, swallows darting about where there were none…

And then it was over, for about 95% of the crowd at least. I just don’t get it, all those folks who spent nearly two hours looking up in awe as the moon covered the sun. Yet most of them didn’t care to watch as the moon completed its drive-by.

And for those who warned about using solar glasses to filter your camera lens, I say bah! No photos whatsoever will ever do justice to the corona seen live during a total eclipse. 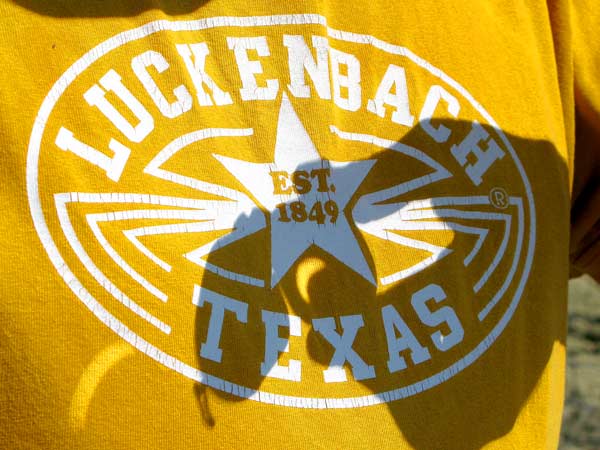 See y’all in Luckenbach for the 2024 total eclipse! That one’s gonna last a lot longer, so please take your time and enjoy the ride.