There is a vacancy at Vickers Ranch. 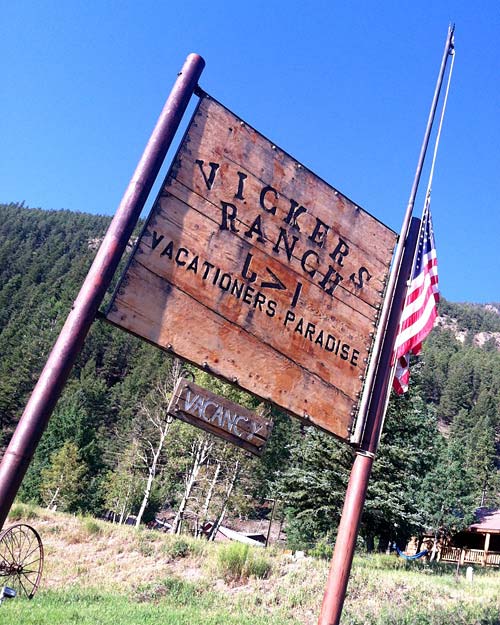 I know I’m not the first to ever write a tribute to Perk Vickers, and certainly I won’t be the last. But I can honestly say, I am honored to have met such an honorable man.

I first met Purvis C. Vickers when we first started workamping at Vickers Ranch in the summer 2008. At the ripe young age of 94, he immediately struck me as inspirational, witty and full of history.

After about my fifth season working the hay fields—where he would still drive up to and supervise—I believe he may have actually remembered who I was. The next year he was living in assisted care. And this year he passed, just a few months shy of his 100th birthday.

Perk lived a full life, and his time had come. That time nearly came a few times in his life—the first as a young child when he was dragged by a horse and nearly killed. That accident gave him his distinctive limp caused by one leg being shorter than the other. But as he told his grandson Paul, a.k.a. Purvis the younger just the week before he passed…

“I’m ready to catch the train.”

I’m gonna miss that ol’ man, and some of his favorite sayings…

“Every day is a great day.”

Ol’ Perk must have told me that every time I saw him, or at least every time I asked how he was doing. And when it came to hayin’ if we were getting a late start, I’ll always remember him shouting…

Apparently Perk was often heard saying that during his working days on the ranch, which were also apparently much harder back then. Did I mention this man was full of history about this place? No wonder, considering he worked here for nearly a century!

My fondest memories of Perk though, were of the tales he would tell. And my favorite has to be about some rather quick thinking and porcine indulgence …

“Ya ever seen a bunch o’ these goddam drunken pigs?”

Speaking of burning daylight, however, a story told by a long time ranch guest sums up the type of man Perk was. Some summer in the late 70s, this couple was awakened before daybreak with Perk outside on his horse yelling, “Wake up Ed! Get out here!” Thinking there was a fire or some other emergency they ran out to inquire. “The sun’s about to rise,” said Perk. “It’s the most beautiful thing, and you just gotta see it!.”

I remember one time I asked Perk his secret to living and loving life so long. He just picked up his cigar and pointed to his mason jar.

I’ll never forget how he always called me Boll Weevil, or how it took a few years for him to clearly explain why he used the term. You see, just as I was obviously inexperienced my first year on the ranch, Perk was himself once long ago an inexperienced oil field worker where he was first given the same name.

When the news came of his passing, it was no surprise, but it hurt just the same. Meanwhile, work must go on at the ranch. And Perk wouldn’t have had it any other way.

The family decided to rename the old Rec Hall in his honor. And why not? Half of it used to be located way up the mountain, until perk and his brothers decided to disassemble the building and relocate it closer to town. It has been a restaurant, a dance hall, and for many years, home to the Friday Night Guest Appreciation Dinner. And now, it is Perk’s Place.

When we first started talking about a sign, Paul suggested we needed a special piece of wood—perhaps from one of the many old mine sites Perk had worked. Then one Friday morning, Larry showed up on his four-wheeler and said, “I’ve got something special here.” It was a timber from the original homestead site. It was the perfect size, and I finished the sign just in time for Amazing Grace. Very special indeed.

“There’s no hope for the Satisfied Man.”

3 thoughts on “A Tribute to the Original Boll Weevil”