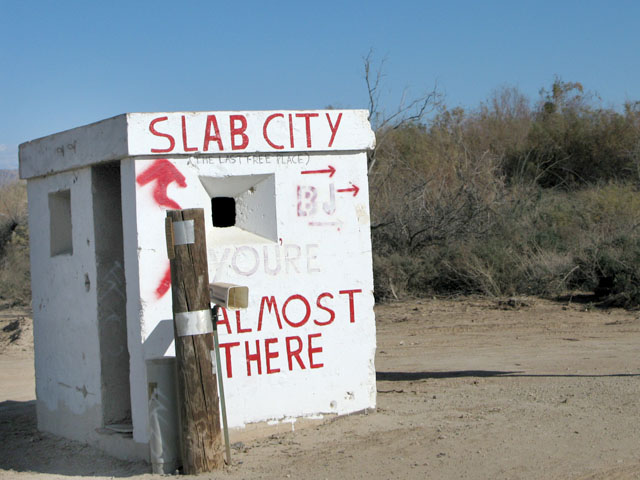 Among RVers, no other camping area evokes such intense reactions as Slab City. People either love it, or hate it. There is no gray area among this 640 acre dismantled military base near the Salton Sea.

Made famous by its appearance in the movie “Into the Wild,” Slab City wasn’t on our radar until our friend Skinny Chef asked if we wanted to meet her there. Then coincidentally, I found this blog entry, by a young RVing couple we met back in South Carolina;

“The movie depicts Slab City as this really cool RV hippie community, where people of all ages hang out – peace, love, happiness, rock and roll, and all that. Well yesterday, we drove two hours to Slab City and nothing could be further from the truth.

Slab City is an RV slum, pure and simple. It’s actually really sad – people living in tents and abandon vehicles. There were even remnants of burned down RVs strewn all over the place. It’s amazing to think that people actually live this way in the US – and it’s only 80 miles from swanky Palm Springs.”

This intrigued me. Liz is a nice person and I like her a lot, but the two of us are quite different. I’m crunchy granola and like to keep things simple, while she’s a high flyin’ New Yorker who’s into manicures, and the glamourous life. Once I saw what she thought of Slab City, I figured if she hated it, I’d probably love it. 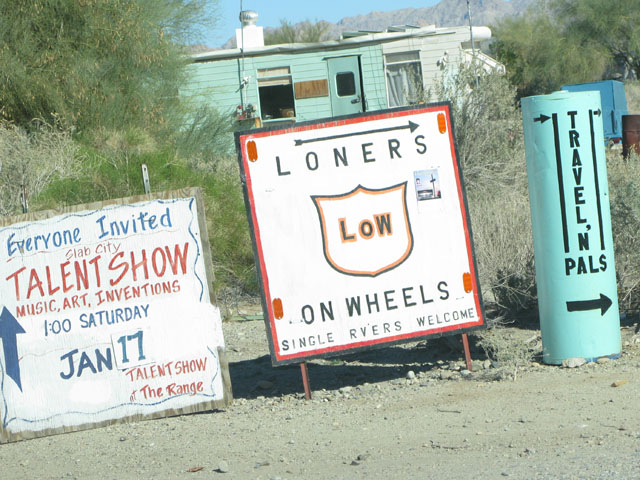 Do come here with an open mind if you plan to visit. Many people we know would be completely offended by the post-apocalyptic look of the place.

To come here requires someone who is willing to look beyond the surface, to scratch a little deeper at a situation to learn the real story.

What Slab City Is:

The desert scenery outside Slab City is beautiful, surrounded by a rugged mountain range. On most days, you can look east to the Chocolate Mountains, about 2 miles away, and watch the US Navy spend your tax dollars by practicing bombing runs and playing war games in the air. We took two hour bike rides without seeing another soul. 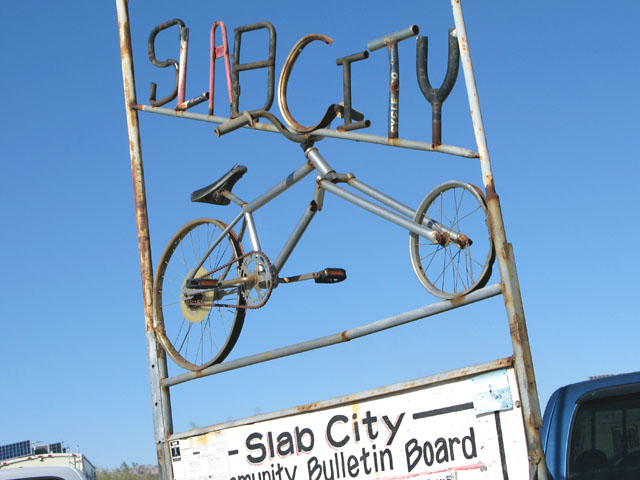 The other day, Jim went to see Solar Mike, about our solar system. Mike asked Jim “How long are you staying?” Jim replied with “oh, a week or two.” Mike looked at Jim with a knowing look and chuckled… “Yeah, right.”

I think he could tell just by looking at us. The Slab City lifestyle is agreeing with us, and we’re going to find it hard to break camp this week.

24 thoughts on “Mad Max Meets Good Sam at The Slabs”