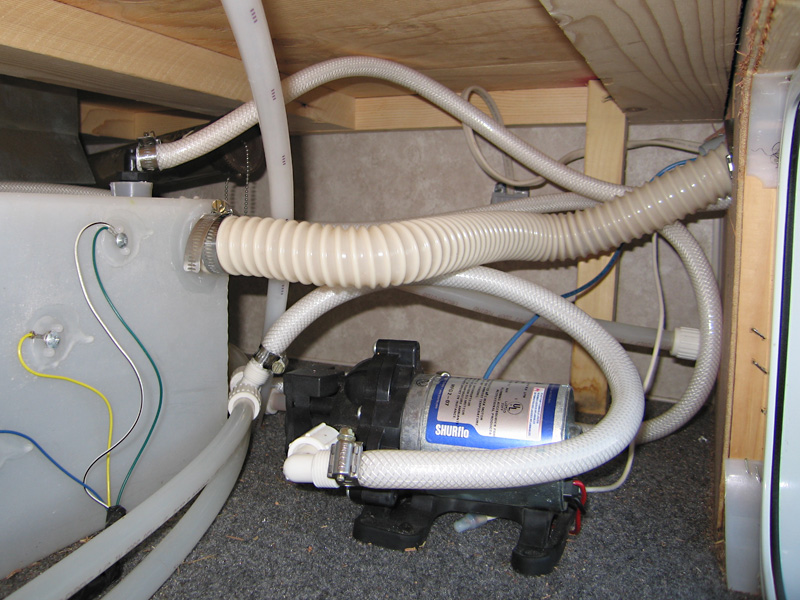 When our freshwater fill spout started coughing up water when we filled the tank, there was no need to call a doctor. I knew I could handle this one. But I did wonder why it started happening all of the sudden.

While filling up our freshwater tank a few times, we noticed water backing up and burping out of the fill hose. Upon closer inspection – which any good RVer should always undertake in circumstances like this – I noticed the freshwater tank expanding with air whenever this happened.

This meant only one thing. Air was not escaping as water was going in. And that could mean only one thing. The hose for displaced air was clogged. But it wasn’t. The hose clamp had crimped the hose pretty tight, but air desn’t need that much room to escape!

I disconnected the hose that lets air out from the top of the freshwater tank and made sure it was clear of obstruction and reconnected it. I then set out to cure the freshwater cough for good.

I noticed the supply hose was filling up with water causing the “burp” in question. I determined that by re-routing the hose at a better, more direct angle from the fill spout to the tank, the problem would be solved. And it was.

After disconnecting the hose and running it over instead of under another one as it previously was, I cured our tank’s water cough. But we still have no idea why the issue just started occurring all of a sudden. But then again, I suppose that’s how it is with all RV technology issues.

If you experience water coughing out of your supply hose when filling your freshwater tank, look at how the hose is routed from the fill hole to the tank. If the hose loops down and then back up to the tank, this fix should do the trick.

One Response to “A cure for the common freshwater cough”