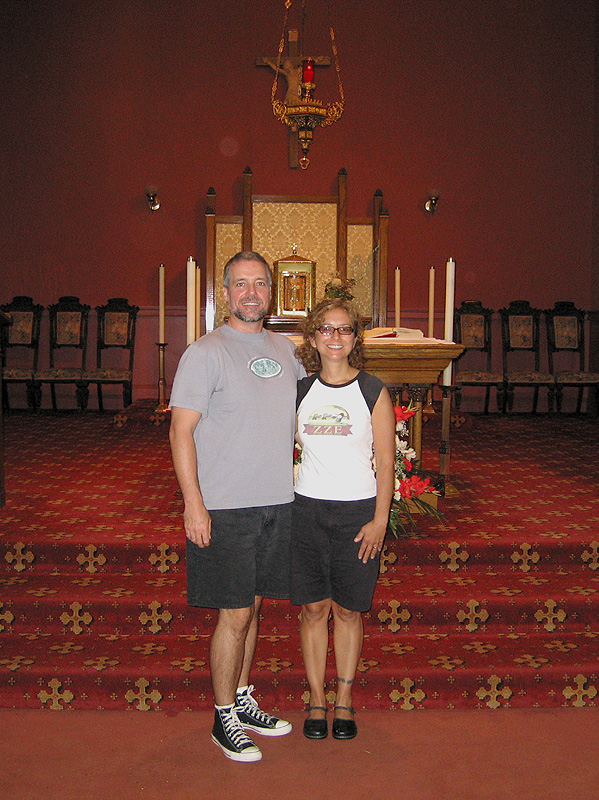 We haven’t blogged in a few days because we took some time to trace my roots with a brief trip into Toronto. While we accomplished our mission of finding the church where my parents were married and the cemetery where my grandparents are buried, we also discovered that the trip was far too brief to discover everything we wanted to know about living in Ontario, Canada.

Although we have budgeted for a few hotel nights each month on this trip, our stay at Melford Cottage Bed and Breakfast in Oakville Ontario was the first time we have left the comfort of our trailer since selling our stick house and putting our bedroom furniture in storage over three months ago. While it did feel a bit weird leaving all our possessions in the trailer at Four Mile Creek NY State Park campground to take a little vacation from our “vacation”, Heather Donaldson’s home served as a great base to search for my Mom’s roots around Toronto and gave us a chance to reconsider what the future holds for us once again.

I never knew any of my grandparents. And I only have one vague memory of meeting my grandmother at about age five. Since I struck out trying to find the grave site of my Dad’s parents on a previous trip to Walla Walla, Washington, I was determined to try harder to find out about my Mom’s folks. This turned out to be easier than expected. 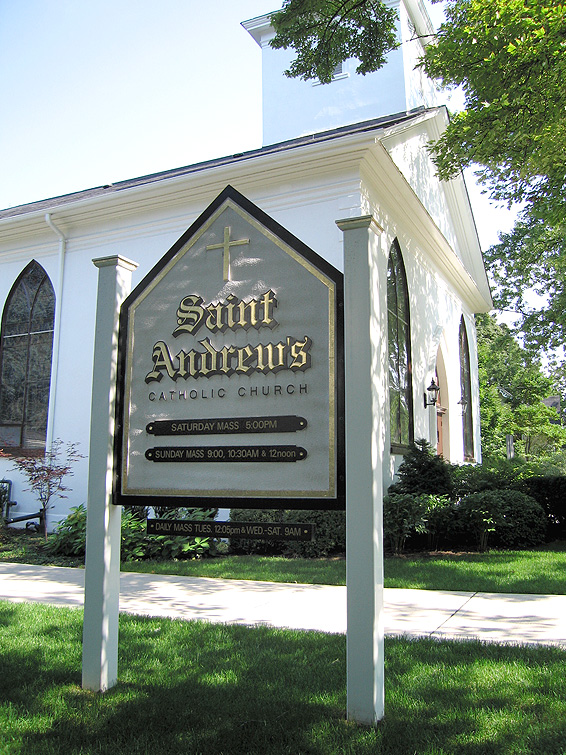 Goin’ to the Chapel…

My first goal of this little jaunt, however, was to find the church where my parents were married. A Google search turned up a handful of Catholic churches in and around Oakville, where my parents met. It also led me to a helpful website of volunteers offering free research and other Random Acts of Genealogical Kindness. This and cousin Bill’s memory of where the church might be located led us to St. Andrew’s Catholic Church. After driving by a few that were obviously too new to have even been around in 1953 when my folks got hitched, we found St Andrew’s just a few blocks from where we were staying.

Located on a quiet side street near downtown Oakville, just a block from Lake Ontario, we had a feeling as soon as we drove up that we had found the right place. From wedding pictures I have, the windows looked familiar, but the altar did not. (A deeper look into the church’s website later revealed an older photo of the familiar altar on their History page.) 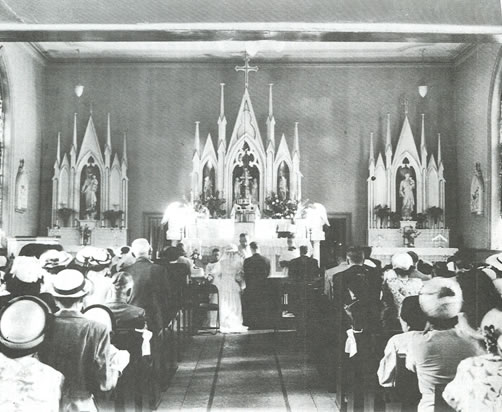 A very helpful woman in the parish office, however, quickly gave us the confirmation we sought. When we gave her the names and wedding date, she reached into a filing cabinet, pulled out an old registry book, scanned a few pages and read the names back to us. With both of my parents being gone for years now, it felt strange to see their signatures. But it felt good to stand on the altar where they said their vows and check this accomplishment off our list. On to finding the dead people.

In Search of the Long Lost

The same woman who helped us with the wedding records also happened to have the parish’s death registries – dating back to the late 1800’s – tucked away in another drawer. I found it amazing how this valuable and historical information had never been digitized, cataloged, cross-referenced and hyper-linked with the original documents preserved and archived off site. But this incredibly analog record keeping system was perfectly functional after all, even if it was immediately obvious how the spines on these beautiful books were getting destroyed. 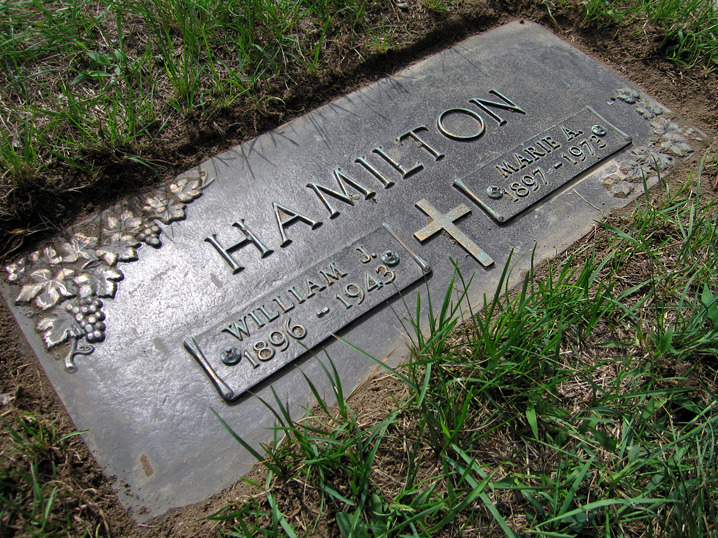 After guessing the approximate year of my grandmother’s death, and grimacing while the well intentioned woman ran up and down the old yellowed pages with her ball point pen, I was happy to hear her say the name Marie Agnes Hamilton. Kind enough to copy the page for us, she helped me learn that my grandmother died in Bend, Oregon on June 18, 1973 and that she was buried at Mount Hope Catholic Cemetery in Toronto. What she was doing in Bend, or how she died, I will never know. After watching the church woman flip frantically through the precious old registry looking for information about my grandfather’s death, we insisted she had been enough help and went on our way. Perhaps I neglected to mention the forms in this old ledger were in Latin and the date fields began with 18__.

The record-keeping system at Mount Hope is just as analog, but also just as useful. And the clerk there was just as helpful. He quickly found the grave site of my grandmother and helped solve the mystery of my grandfather. Kind enough to make copies of the interment cards for me, he explained that William Hamilton was buried “x deep” with Marie later buried directly above him. These cards also explained why we couldn’t find record of William’s death in the years before or after Marie’s passing. Apparently he had died thirty years earlier of Coronary Thrombosis at the ripe young age of 47.

Plot #8 in Section #17 of Mount Hope bears a rather unremarkable 12″ x 24″ marker. Among all the amazing intricate headstones bearing photographs, large statuaries and stone crosses, the simple brass plate of my ancestral grave site made me stop to wonder whatever happened to the family riches, if there ever were any. 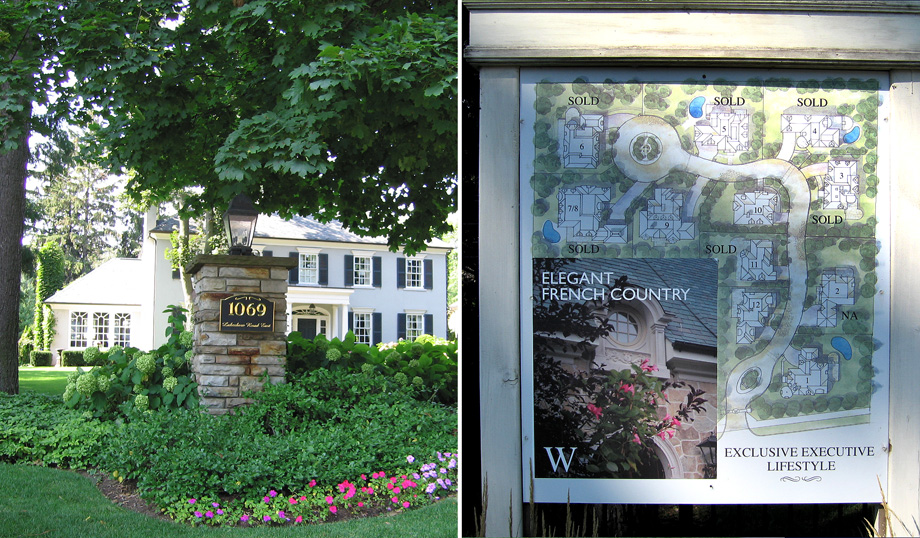 I had always heard stories of Avalon Villa – the vast estate owned by my grandmother. I once learned that my father was a boarder in a house on the premises and that’s how he met my mother. And I knew that the the estate was used as a location for the filming of “Equus” starring Richard Burton

. But if there ever was any wealth in the family it never trickled down to this generation. But somebody got rich.

The property that was once at 1069 Lakeshore Rd in Oakville is now home to more than a dozen McMansions. This new micro development with houses of grandeur disproportionate to their lot size sits alongside yet another vacant lot with the remnants of a circular driveway where my mother might very well have played as a little girl. From the looks of the neighborhood, I’m certain there will be at least another half dozen stone-fronted mini monstrosities going up soon. At least I had a chance to drive in and see them putting the finishing touches on some of these places before they gated off the community.

Hamilton Marriage and Burial Records
(Click to view larger images. Use Back button to return.)

5 thoughts on “Climbing Down the Family Tree”